A Trip to Africa 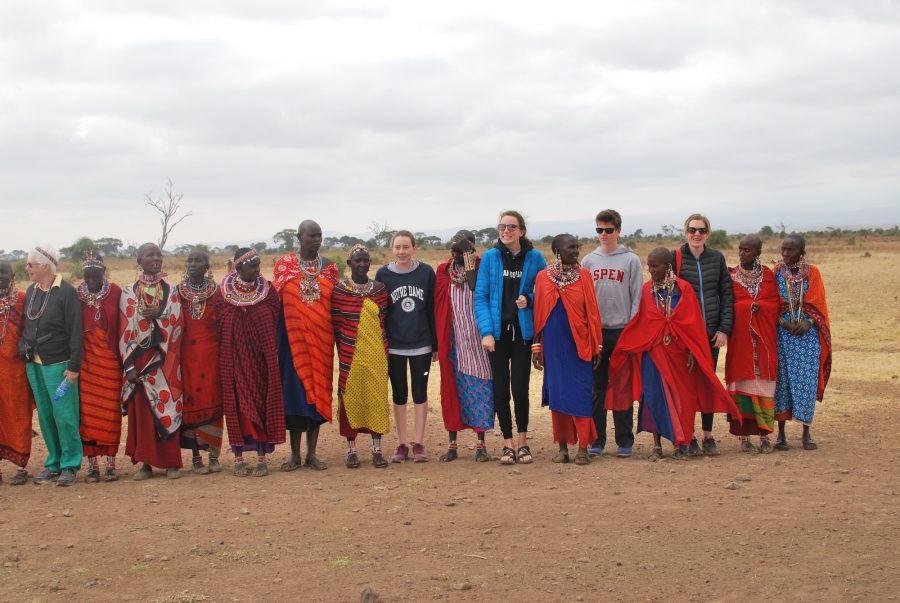 Knees pressed against the seat.

A metal restraint at my stomach.

A fluorescent light illuminated to my right with a constant line waiting below it.

And there were eight more hours. And then another eight hours of sitting in this chair that has now become my bed for sleeping, my table for eating and my chair for thinking.

When the flight attendant motioned that it was all right to grab our bags from the overhead compartment, I reached for what seemed like my life’s supply in a simple 9 inches x 14 inches x 22 inches bag.

And waiting for us as we got off the double-decker plane was the woman who was the reason for our travels, Margaret. She was a small African woman dressed in bright colors with a smile from cheek to cheek. Seeing her made me feel at ease. I knew she was going to look after us.

All eight of my family members packed ourselves in a van, and we headed towards a mission where we would spend just one night in preparation to go to Margaret’s home.

The mission’s home where we were housed at during our first night was originally founded by a Mennonite group. With luscious greenery and an old-fashioned room key, the simplicity was a refreshing find to my technology and materialist-filled lifestyle. The spotty internet connection and the desire to start a good book had me sitting in the 70 degree weather on a comfy chair with a milkshake waiting for the arrival of the next van that would haul us to Margaret’s home.

A two-hour drive later through horrendous traffic, terrible roads and the continuous fear that we were constantly driving on the wrong side of the road, we arrived at a home surrounded by what seemed like 20-foot tall yellow walls and a guardsman with a gun standing outside the gate and the same sweet woman waiting for us.

Her home was filled with Christian trinkets and African animal statues. It felt warm and welcoming as Margaret guided us each individually to our rooms where we would be sleeping under mosquito nets.

A week passed of doing volunteer work for the En Gedi children’s home and working at children’s schools.

It was our last day.

And what was soon going to be my favorite day.

Sitting five people across in the small Honda Civic with no air conditioning, slurping yogurt from a straw to keep us cool, we headed to the City of Carton Slums.

Blocked by this brick wall, we stretched our necks from the window to try and peek what was really within the walls, but we would soon find out for ourselves.

When the woman from the local woman empowerment program told us to exit the car, she explained our purpose and her mission: to teach.

Empty yogurt carton still in hand, I asked where the nearest trash was, only to be told that we are standing — and these people are living — in trash and for me to just throw it on the ground beneath me.

Dogs running rampant, children running around with clothes as clothes and homes that are literally made out of plastic cartons and trash.

Each home had its own story.

One was the story of rape.

Another a story of a broken family.

And one of a forbidden marriage.

She looked at me but no words were spoken. A 16-year-old girl and her new husband were driving home. She was pregnant with her first child and then crash.

Her life flashed before her eyes, her husband’s taken and she forever with a mental disability. Not being able to speak for herself, her mother in law was the only caregiver moving them to the slums. But with them not being able to work in the fields, there was no source of income.

The girl become the mother-in-law’s income.

Sending in men was the only option and the girl could say nothing.

Man after man. Child after child.

Until now when the empowerment program has taught the girl about contraceptives and how to help others. But she is not the only one.
A broken family.

Led into another home, my head hit the ceiling and my hair got stuck in plastic-bag wrapping that hung from the ceiling.

Holding her one of eight children, she explained her living situation. She didn’t see her husband until night, when he abused her physically and sexually with only a tattered bed sheet dividing them and the eight children. But he was the source of income.

It was a father who had been following our group since we had arrived at the slums. He continued to point at the school — the school where his daughter was attending that had classrooms smaller than my mother’s closet in America WHAT??? but she was also his wife and his bearer of his children. Shunned to no work, he walked around the slums looking for any person old or young that he could get pleasure from. But when we walked into his home, a baby lay crying in the sunlight with no food or water.

The reality of Africa was poignant in this visit.

This was the Africa everyone talked about. The Africa that was absorbed in poverty. But as I looked beyond the slums, just a couple miles to the left was new industrial apartments.

The constant question of whether these people’s homes will be taken over within weeks is not even prominent in their minds.