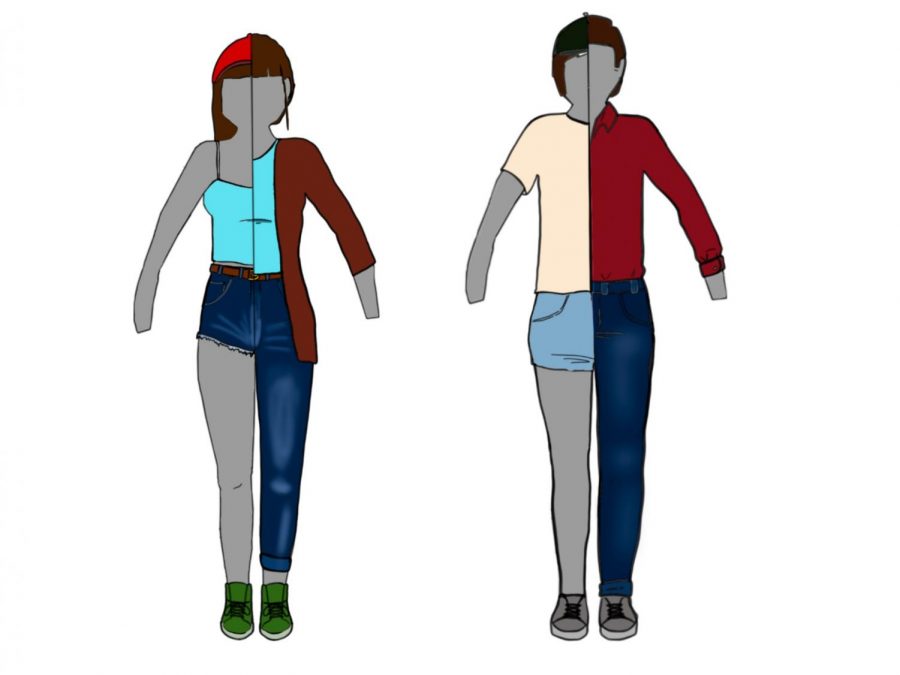 The dress code for school differs from casual clothes.

She waited for the fashion to change.

She tried to ignore the sight of them.

She couldn’t ignore the fact that nothing happened, she couldn’t help but voice her opinion on what seemed to her to be dreadful, almost sinful attire — leggings.

In late March, a concerned University of Notre Dame mother wrote to the student newspaper at the university, voicing her concern with women wearing leggings. “You couldn’t help but see those naked rear ends,” she wrote. “Could you think of the mothers of sons the next time you go shopping and consider choosing jeans instead?”

While a backlash of mockery most often met the mother’s request, her letter did point out the controversy that still exists about dress code: what is appropriate and what is inappropriate attire? Charleston County School District enforces a dress code created to ensure a learning environment free from distraction and, in many ways, according to Associate Principal Jeffrey Blankenship, will protect and prepare students.

“We follow the dress code administered by the District,” he said. “We need to make sure this is a learning environment, and although we do not have a uniform dress code, when moving forward with a professional career, it sets the stage for students when moving on from high school.”

A uniform dress code would hinder creativity according to sophomore Gavin Hewitt. In a school consisting of 4000 students, having the freedom to dress under the regulations of a casual dress code allows for students to create their own identity.

“Uniforms prevent students from expressing themselves through what they wear,” he said. “Even though we follow rules under a casual dress code, we’re still allowed to express ourselves. In a school as big as Wando, it’s easy to be seen as another face around the halls. Having a casual dress code lets us create a style of our own, while keeping the environment somewhat professional.”

While Blankenship believes the benefits of a dress code will continue through a professional career, some students believe it is implemented to restrict creativity or hinder expression. students often find ways to “push the envelope” when it comes to following the dress code.

“I understand why a dress code is necessary,” senior Ana White said. “Yes, it prevents a lot of inappropriate attire when coming to school, but the dress code has negative implications that are not necessary in a school environment. The dress code implies that the basic shape of a female body is distracting and something to be ashamed of.”

But according to senior April White, the dress code allows for students to express themselves, without restricting all creativity.

“I think that the administration does a good job at keeping the learning environment professional,” White said. “Although the dress code does limit our attire, it still allows freedom of expression for students, all the while not being too outrageous. We’re only here for seven hours out of the day, we might as well just adhere to the rules implemented by the administration.”

According to English teacher Cynthia Lawson, the dress code creates habits that can be used beyond high school.

“First impressions are lasting impressions,”she said. “I don’t believe that students should be clothed head [to] toe — students shouldn’t lose their personalities or identities when abiding by the dress code. I do believe that in our society, there is an expectation. A part of what we do at Wando is to prepare students for the next part of their lives.”

In a society dominated by social media and facades, rules and expectations regarding student attire can guard students from negative first impressions, Lawson said.

“In our society, people judge. The way one is attired could be a representation of people one chooses to ally themselves with,” she said. “When people judge, they might make a misjudgement. Messages are sent by the way we choose to dress, speak and people’s company we choose to keep. Dress codes exist because we are Wando, we are the largest high school in South Carolina. We have an amazing reputation. By holding our students to a higher standard, it brings our entire school together.”

Blankenship said the administration recognizes that manufactures may not produce clothing that always adheres to school dress codes.

“Students who don’t follow the dress code are doing it on purpose,” he said. “Today’s fashion is a lot different from when I grew up. When the people making the dress code decide what is appropriate and what is not, that may not agree with the style of students today. A few years ago, the dress code stated that females could not wear gym shorts. Gym shorts are very much in fashion today. When taking all factors into consideration, maybe manufacturers are not making them past fingertip length anymore. We have to be in tune with what students are able to buy, but at the same time, we need to get everyone focused on learning.”

“For the most part, I think you guys are wonderfully respectful,” science teacher Jason Sneed said. “There are always people who will take things too far. The minute things become too far on one end of the spectrum it becomes somewhat of a distraction. Whether it be male or female, if we let it go too far one way it really can become an issue.”

The urge to rebel against the rules of administration is the duty of a teenager, according to Sneed.

“It’s basic human nature, we always push things,” Sneed said. “It’s definitely one of those things where students feel administration is telling them what to wear, which is a viewpoint I completely understand. But on the other end of it, we are looking after you guys and trying to prepare you for the real world environment and also decrease the distractions in the classroom.”

“A part of being a teenager is learning who you are. It’s only natural to have somewhat of a rebellious streak,” Lawson said. “It’s always been there, it’s a part of growing up and learning where your place in the world is. Students who do not abide by the dress code are often students trying to make a point. I often wonder what it’s worth to prove and if it will matter a year from now.”

Having a dress code in place prevents a certain lack of effort when it comes to student attire, according to Lawson. Although the manufactured length of shorts may be out of the control of students, wearing pajamas or swimsuits to school could become the next trend without a dress code.

“I think it would be a free for all,” she said. “ I think it would give students the opportunity to bear more that needs to be beared. As a teenager, high school is your job. At any job there are expectations. We have suggestions and we have rules. As far as not having a dress code, I think anything would prevail. It’s scary to me because many individuals have their ideas of what is appropriate and what is not.”

The dress code is not only implemented in high school, but carries on throughout a professional career, according to Sneed.

“In most professional jobs or settings there is a dress code that goes along with that,” he said. “If you ask me, simply following the loose dress code we have, is truly better preparing students for what should be expected in the future.”