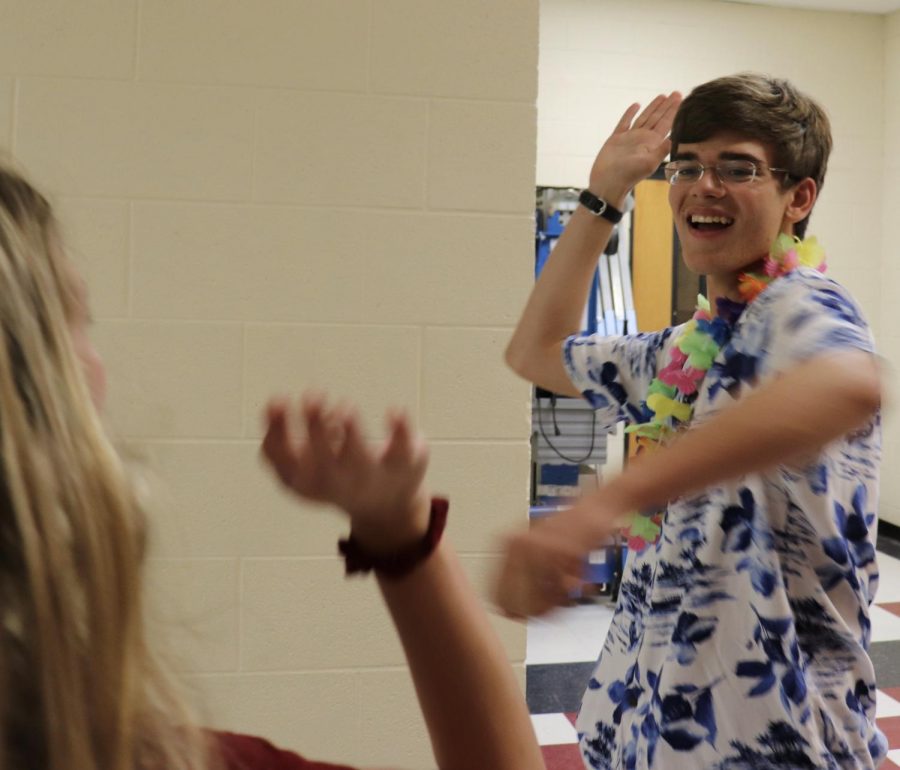 Davis Ginn greets another student in the hallway.

Music, tennis, travelling and Reese’s Pieces are just a few of the things that bring senior Davis Ginn happiness.
And of course, Batman.

But there’s something to Ginn that gives him a sense of fulfillment that sticks out from all of these — a simple high five.

Ginn’s love for music and high fives began when he first took piano lessons in the first grade. While those only lasted until the fourth grade, he found himself in music again when he was given the option of joining either chorus or band in Moultrie Middle School. Since he couldn’t sing, band it was.

“Because my dad already had a trumpet laying around, I just thought I’d go with that,” Ginn said. “And it seemed like the most epic instrument to me because I thought of Super Mario Galaxy. The whole game has great trumpet music.”

High fives eventually became a big part of Ginn’s time in band. What started with a daily high five with friend and fellow senior Jonathan Terry led to high fives in the trumpet section to high fiving everyone in band class.

And since then, Ginn’s passion for music as well as his positive attitude and number of high fives have grown.

Ginn has been selected to All-State several times, two of the times being First Chair, along with getting to go to Honor Band of America and making Principal Chair for the country.

Not only that, but Ginn has also been featured in the 2017 Macy’s Thanksgiving Day Parade with the Great American Marching Band. Ginn also is a member of his fusion band called Fusion Jones, who recently had their biggest gig in Columbia in front of 14,000 people.

“We just do a lot of gigs around town and we’ve played a couple albums,” Ginn said. “We’re like funk, rock and jazz all together.”
Spreading happiness has become something important to Ginn.

“I love heroes,” he said. “I love people who go out of their way to help those in need and inspire those around them. I hope to be that one day, you know, everything from hero films, everything from everyday heroes.”

In the fall, Ginn will attend Belmont University to major in Commercial Music Performance for the Trumpet.