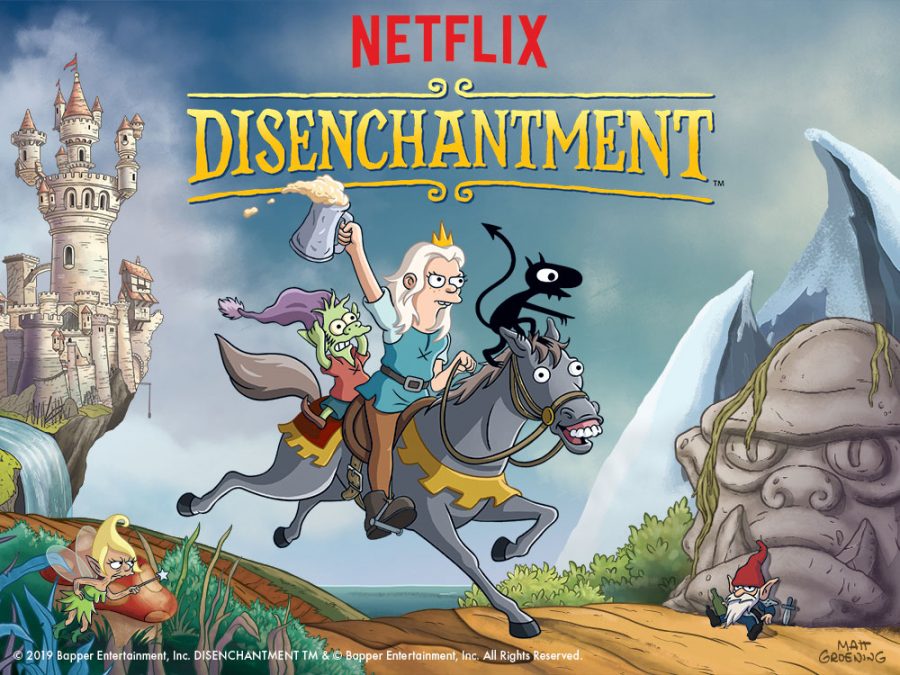 Netflix has no shortage of mediocre shows trying to be more than they are.  The classic dysfunctional family, with standalone episodes full of slapstick humor that consistently misses its mark.  Tired ideas from once popular shows, like The Simpsons or American Dad recycled into forgettable mediocrity.  The first episode was released on Aug. 17 of 2018, and the second season premiered on Sept. 20.  Now is the perfect time to watch the beginning as well as the new season.

Disenchantment brings a much needed breath of fresh air to the genre.  With a combination of interesting characters and a plot that develops over the course of the season, Disenchantment finds itself on par with some of Netflix’s best content.  It features Abbi Jacobson as the main character Bean, and a talented support cast with experienced voice actors such as Eric Andre and John DiMaggio.

The creator of the show, Matt Groening, is most well known for his other works, The Simpsons and Futurama.  Disenchantment is a massive change of pace from Groening’s other shows, with the comedy being more directed towards millennials in contrast to the mostly Baby Boomer fan base around The Simpsons.  The show also takes a turn from the generic white father main character seen in almost every animated comedy, and is all the better for it.  The main character, Bean, is a fun and interesting female lead.

Unlike practically every other sitcom to date, Disenchantment actually has a story to tell.  Each episode takes place right after the previous one, creating a more compelling story.  Due to this, Disenchantment does have a rather slow start.  The first few episodes lack the polish of those towards the end of the season, but are definitely worth watching to become familiar with the characters.

Disenchantment brings new life to the animated sitcom genre.  With an interesting plot, compelling characters and actual decent comedy, it’s a far cry from the countless other sitcoms being released.