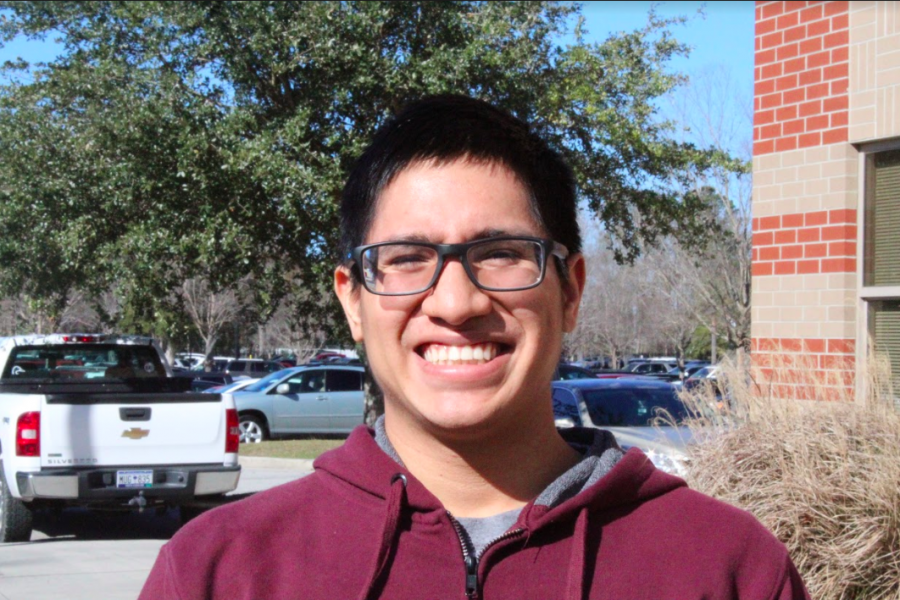 Moving is never easy, especially as a teenager. Andrei Armijos Elizalde knows this better than anyone, having lived on three different continents before his senior year of high school.

Born to Ecuadorian parents in Italy, Armijos moved to Machala, Ecuador at roughly five years old. He doesn’t remember much of his time in Italy, but he fondly remembers making fun of his father later on.

“My parents are from Ecuador, but they met in Italy…I told my father, ‘why didn’t you get an Italian girl?’” Armijos joked.

After he moved to Machala, Armijos enjoyed learning math and playing soccer with his friends. His love for math continued even through his move to a new country, where he now takes AP Calculus and AP Physics.

“You have to be exact, that’s why I like it,” Armijos said.

The education in South Carolina, however, differs from Armijos’ education back in Ecuador. While it could be difficult for some students to adjust to the different school styles, Armijos appreciates the opportunity to explore his own interests.

“I like it here,” Armijos said. “In Ecuador, you have to do everything, here you can choose what you want.”

Even with the expanded opportunities in school, Armijos still faces challenges along with his big move to a new continent. While many people here tend to exhibit Southern hospitality, there are still some who look down on people from Central and South America — people like Armijos and his family.

“I’m not Mexican. People think I’m Mexican, that’s kind of racist. I remember once, I don’t know who screamed to me, ‘Return to Mexico!’” Armijos said. “I don’t know anything about Mexico!”
Armijos has faced his fair share of adjustment through the move. Back in Ecuador, he played soccer and had a scholarship to a private school.

But when his mother and stepfather decided to move to the United States, he chose to go with them, rather than staying in Ecuador with his father.

“I just wanted to come here because…I wanted to learn English,” Armijos said. “My parents didn’t have enough money, that’s why they asked me if I wanted to move here…I had the choice, because my father still lives there.”

Improved English skills aren’t the only positive Armijos has experienced in the United States, though. He’s glad for the opportunities, but more importantly, he likes our climate.

“I like the weather here. In Ecuador it is so hot, always,” Armijos said. “Last winter was my first time seeing snow.”

Although his father still lives in Ecuador, Armijos brought with him a mother, stepfather and two younger siblings in middle school.

“They speak better English than me,” Armijos said. “My brother is always playing Fortnite, and screaming — in English!”

Although moving here was Armijos’ choice, he still experienced some hardships, as would be expected after moving nearly 2,500 miles. Armijos had no regrets about the move and approaches the transition in an optimistic manner, but there are a couple aspects he takes issue with — the sprawling metropolitan area being one of them.

“Here in Mt. Pleasant, you need a car to go everywhere. In my city, in Ecuador, I could just walk,” Armijos said. “[Machala] is kind of a small town.”

If there’s anything Armijos wants people to know about immigration, it’s that people are trying to come here for a better life, a chance at a new beginning.

“Their life is not easy. [There’s] corruption…that’s why they leave,” he said. “In Venezuela, they are killing people for their revolution. Some people want a better life.”

Armijos looks forward to his future in America and his potential visits back to Ecuador.

“I want to go to a college, but I don’t know where yet,” he said. “I would return to Ecuador…I want to make some money, but maybe after I’ll go back. I miss my friends.”