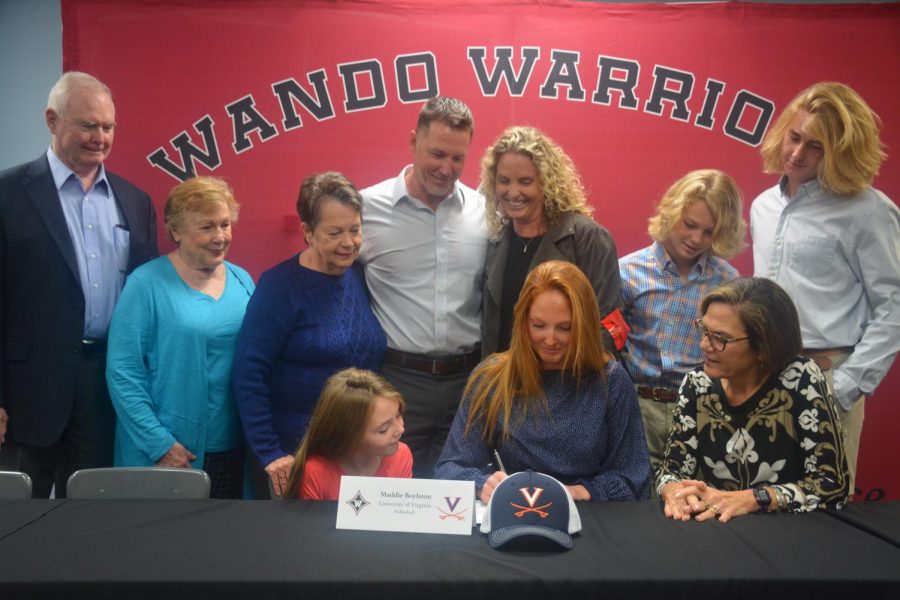 It’s all about power.

For senior Maddie Boylston, she has found her power and enthusiasm in volleyball.

“Being on the court is such a thrill. I’m not going to say I don’t get nervous, but that’s what makes me play the best. I thrive off of the pressure and the competition,” Maddie Boylston, the starting setter for Wando, said.

The UVA commit, who started playing volleyball when she was 12, said there is nothing in the world that compares to the feeling of a perfect set spiked down by a teammate. Boylston juggled both basketball and volleyball until she realized volleyball was her true passion. She got into the sport through her neighbor, ex-Wando player Meghan Kimbrell.

“My thing is, put in the work. I think the biggest thing is mental. I think you need to keep such a stable mentality because volleyball puts you through highs a lows. When you make a mistake, the whole gym sees you make a mistake. It’s normal for that to get to you and if you make a mistake it is so easy for you to make another mistake, because you know who’s watching you,” Boylston said.

Boylston comes from a family of athletes, a brother and father who both play and played football. She said she has always tried to set herself apart in athletics. Boylston was just named the state player of the year in S.C. for AAAAA.

“Seventh grade eighth, eighth grade, maybe even sixth grade, I worked out before school Monday, Wednesday, Friday like crossfit, lifting weights and stuff like that,” Boylston said. “I’ve always loved sweating and putting a lot of grit in.”

Boylston started getting a lot of attention as a sophomore on a Columbia club team coached by Adam Spade. Spade’s goal was to create the best team in the state.

“I basically got recruited because I was playing with really good players, so we had the top schools in the country watching our court every tournament,” Boylston said. “So it was really crazy, it was really fun.”

Boylston played alongside another very talented player from Ashley Hall, Maddison Matthews. UVA was scouting Matthews and found Boylston alongside her. The coach liked both of them and the idea of them at University of Virginia.

“He actually saw me while he was watching Maddison and was like, ‘I actually like this setter a lot,’” she said. “I went to this camp, he offered me [the scholarship].”

She has played under the wings of many coaches in her time, but in the fall Boylston plays for Wando under Coach Alexis Glover. Boylston praised Glover, who had her 1000th career win for Wando this year. Glover was also named National Coach of the Year last year.

“Coach Glover has always been there for me and she has always been really good to me, I know how passionate she is about the sport so It’s kind of created passion in me,” she said.
“She is so involved. She has not stopped playing, coaching, being involved with volleyball since fourteen years old…She knows the game and she obviously has to be passionate about it. I would say she is totally someone I look up to.”

Boylston started to feel the pressure under college eyes.

“When I switched to Columbia I literally went from this,” Boylston puts her hand down low to the ground, “to this,” she brings her hand well above her head. “Coach Adam really developed my skill,” she said.

One of the biggest aspects of volleyball is mental, Boylston said. Her sophomore season was a low time for her because she wasn’t starting for her high school team and felt helpless from the pressure of the upcoming club season and the uncertainty of commitment.

“I felt so much stress to perform that it created fear in my playing,” she said. “I have learned with a few more years of experience that the last thing I should do is play with fear.”

As a setter, Boylston is in charge of distributing the ball around the court for plays. She leads the state in assists. For Boylston, the best setter has eyes everywhere, great court vision and connects well with all of her teammates.

“Grae [Gosnell] and I have a great connection, this is my first playing on a team with her since 12. I honestly try to have a connection with every single player, like different connections, but connections,” she said.

Boylston has always strived to succeed. Boylston was awarded all-state, all-star, and an all-American honorable mention for the 2018 season. She has big plans at UVA for volleyball and beyond.

“I’m so excited, I know it’s gonna be really challenging. UVA has a lot of challenges, I’m looking forward to lots of study time. I’m actually looking to rush and be in a sorority,” she said. “It’s going to be a lot, but they don’t rush until the spring, which is basically our off season. I want to be as involved as possible.”