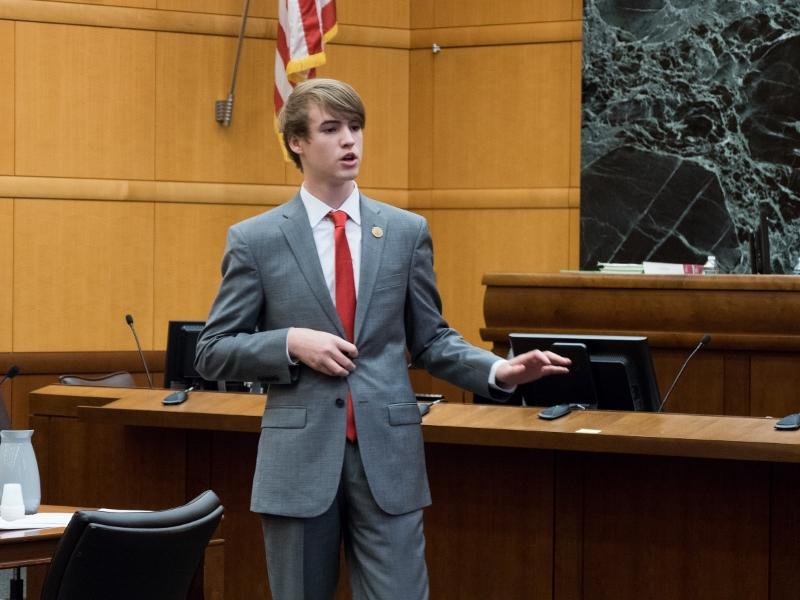 There’s a certain thrill in arguing to all kinds of different people for as many different reasons there may be. It can boost up your mood or lower your self esteem, depends on how your case goes.

Wando High School has done an excellent job in putting real life court cases for young and eager future attorneys, which is exactly what Mock Trial is.

Mock Trial is a stimulating, legal environment to train young adults to function like real life attorneys. The team is usually composed of 12 to 14 students, which makes it easy for it to become close knit.

Just like with real life attorneys, there is a lot of paperwork and no taking it easy on anything. It can definitely be stressful and a lot of late nights and early mornings, but when you’re presenting a case in front of the judge and jury, it all becomes worth it.

Definitely a lot of public speaking, keeping it calm and civil while arguing and trying to prove their point.

There are two different programs involving the Mock Trial: State and Empire.

Empire is the more international, independent, and includes harder cases and there is a fee to pay; there are three or more attorneys and witnesses which usually means it’s half the pressure.

State is more fair and limited, about half of the attorneys and witnesses of Empire. It is associated with the SCPBR. It’s not as hectic or nerve racking but it’s still a lot of hard work.

Mr. Beaudry has been a heavy working and functional Mock Trial coach for 4 years now.

“I like to argue and I like the law,” Beaudry said. “My favorite part of coaching would have to be the excitement of working with kids, teaching them present day laws and debating while working with all kinds of skills.”

While presenting their case, they are judged on not only their research and hard work but how well they present it — which is usually judged by a real jury and a real judge.

There is time for the team to scrutinize each case which usually takes about eight to 12 weeks to look through everything and double check their facts and reasonings.

Beaudry has influenced and helped a lot of his team, especially Coleman Wallace, a Mock Trial attorney.

Coleman started the attorney life when he was just a little kid, mainly because both of his parents are attorneys and his mother coached the Mock Trial team for years.

Freshman year he decided to follow in his family’s footsteps and join Mock Trial. Now he’s a senior and is still enjoying the thrill and excitement of being an attorney, three years later.

“I was raised on public speaking and I really enjoy making the argument,” Wallace said.

He has been involved with nine different competitions, two were in the region, three were international and have all been achievements for their hard and dedicated work.

“Everyone comes together with their different views on the law and arguments,” Wallace said. “Which made Mock Trial place 10th in the nation.”

The entire team has earned great accomplishments for their passion and dedication in their future in the legal environment.