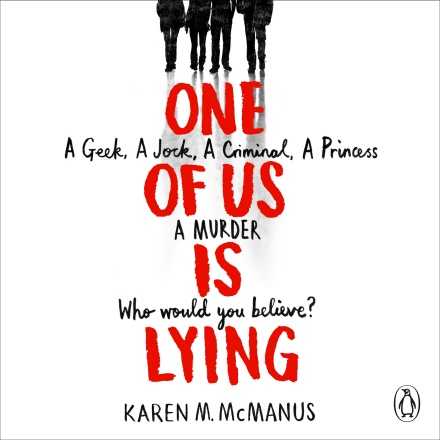 “One of Us is Lying” a thrilling young adult mystery novel

Five students walk into a classroom for detention. The teacher leaves the room, only to return and find that just four are still alive. All of the survivors have a motive: the dead student was planning to reveal the secrets of all four through his gossip app. Which of the four was it — or could it have been someone else entirely?

This is the basic premise of Karen M. McManus’s book, One of Us is Lying. But trust me, it’s the simple truth that this is one of the best books I’ve read in recent memory.

At first glance, it’s an intriguing but fairly typical mystery/suspense novel. This aspect of the book is everything it should be: I was kept guessing throughout virtually the entire story, questioning not only all four of the students in detention, but several other characters as well in my baffled speculations. Small details lead to new leads and twists, eventually painting a picture of what really happened that afternoon. The mystery is entirely flawless.

But even better, in my opinion, are the characters. That came as a pleasant surprise to me — the four main characters are described in the book’s inside cover as the brain, the beauty, the criminal and the athlete. When I saw words like these, I was concerned that the characterization in this book would be hopelessly bland and stereotypical. It was almost enough to keep me from reading it at all.

Thank goodness I opened it anyway because I couldn’t have been more wrong. The characters are complex, dynamic and real. These descriptions do seem applicable at the beginning of the book, which I grudgingly understood because they emphasize how the four are very different from each other. But by the end, their characters developed and changed, proving to be far more than their epithets. To me, this seemed to demonstrate that no person fits into a mold perfectly: nobody can be summed up with just one word.

Another thing that this categorization allowed for was the addressing of a wide range of circumstances. Through a switching-perspective narrative, the author reveals the characters’ flaws in a way that makes them relatable. Because they’re all so different, there’s a message for everyone. One of Us is Lying manages to encompass the highs and lows of being a teenager, touching upon anxiety, anger, and self esteem. There’s romance and heartbreak, frustration and triumph. And all in the context of a fast-paced mystery.