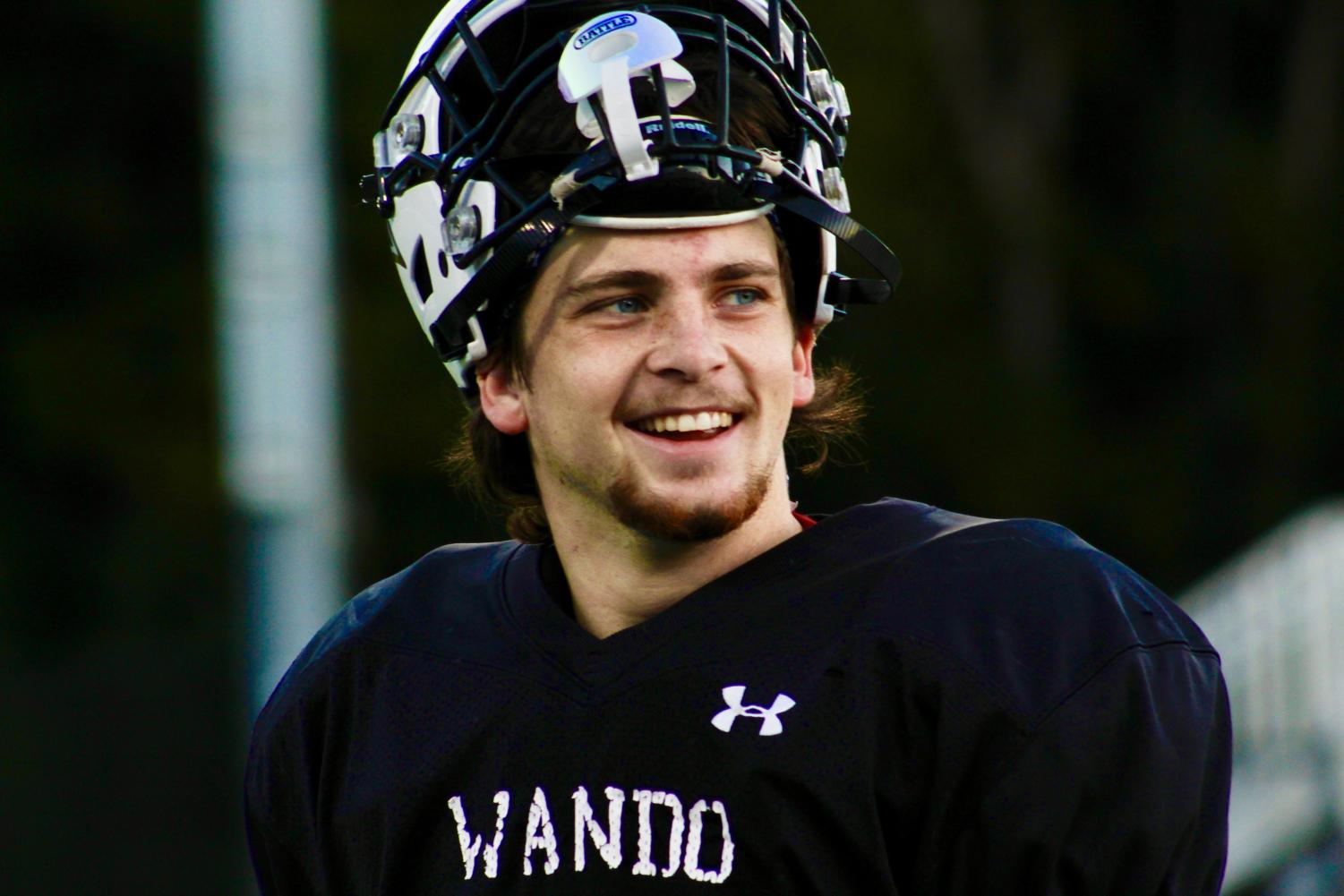 Quick smiles. pausing from the play.

The American game that fuels pride, joy, and even pain while also generating many memories. The pigskin, the gridiron, however you name it, the names are all synonymous to the game of football. For the majority of Americans, football takes over the later months of the year. The months full of Monday night games, Friday night lights, Saturdays at the rec center, and Sunday game day. The immense love for the game and competitiveness spreads around to all.

Every pro player, every high school standout, and every rec center star has a reason why they step out on the field. When Brady Quick stepped out on a football field for the first time at 5 years old, he was ready to play and dominate the field.

“Officially since I was five, I started on my first team,” Quick said.

His parents were sure to put him on many fields to enjoy different sports as a child, but his passion for the game of football kept him on one field. Quick had grown up with a football in his hands ever since he can remember, but unlike most young active little children he also was familiar with the inside of a hospital. Quick was born with a condition called fibular hemimelia where part of his fibula bone is missing.

“I basically don’t have a full fibula and that came with a bunch of other problems; I don’t have an ACL and I have a lot of things wrong with my knee,” Quick said.

He has had multiple surgeries throughout his life ever since he was a baby. The surgeries are all essential procedures to make Quick’s life as an athlete possible.

“I mean from what I can remember or as early as I can remember I knew that I did not have a leg that was exactly right, so I knew I had to get a bunch of surgeries.”, Quick said.

Having a leg that is significantly shorter than the other has been less of an adjustment for Quick and more of the way he has learned to work and play the sport he loves. Learning to step in the direction that benefits himself rather than follow others, has been a big part of his life.

“Because of my left leg being significantly smaller and weaker because of all the surgeries my right leg kind of compensated. If I have to cut with my left leg sometimes I will take an extra step and do it with my right leg, also when I jump or anything it’s all on my right leg,” Quick said.

He has made sure to put in the time and effort in every step of the process. Whether it is time for training, recovery or rest, he is putting in his all every time. Adapting and learning with each step no matter what, because giving up has never been an option for him. He has learned to push through the hard times, by always having a strong mindset and a consistent mantra.

“My family has a slogan that my mom came up with called “Quicks Don’t Quit”. She has been telling me that since I was little and going through surgeries and everything. So I just use that,” Quick laughs.

With recovery and surgery taking a toll on the body, physically and mentally; keeping training consistent is key. Quick’s training was always similar to his teammates, he stayed in the weight rooms and on the field as long as possible.

“I kind of just did everything normal. But then I had a problem with my knee and I had to get surgery in the offseason sophomore year, so I couldn’t do any leg workouts for a while after. But now I have to wear an ACL brace when I do squats and stuff because I don’t have an ACL,” Quick said.

Having the support of his family, teachers, and his teammates who have become family over the past 4 years playing for Wando football program has been a blessing for Quick. The significant connections that his condition has created for him helps guide him to have a stronger come back each time.

“I missed two weeks of my sophomore year and it was kind of difficult to get all my work done, but I just had to get with a teacher and get extra help. In middle school, when I had to get surgery and I had to get a tutor. I had to stay after school for like an hour. ”

He made sure to emphasize that the core of his solid support system, were his parents which he couldn’t be more grateful for. The time, patience, and love that they continuously give him through the joyous and tough times. His mom is the ultimate supporter through his 1 years of his life.

“My biggest supporter would be my mom, she’s always there. All my surgeries as a kid… I got all my surgeries in Baltimore, so we roadtripped all the time. Back when I was born MUSC said that they couldn’t do my surgeries, so we had to find this hospital in Baltimore that specializes in it. So we have gone up there my entire life, so all the roadtrips have been mostly with her,” Quick said.

With the guidance of his dad’s love for football and overall his family being such a big sports family, Brady’s decision to stick with football was pretty easy when it came time to get serious about the sport in middle school.

“Well my dad played football and was pretty good, and he kind of just asked me if I wanted to try it… and I kind of just stopped with football.  In middle school, I became real serious about it and now it’s my passion.”, Quick said

Football for Quick has become a growing passion.

Now as his senior season comes to an end, the sport means more to him after putting in so much time to be his best. For all the work he put into the sport he loves, he has learned lessons that he will carry into his future.

“You’ve got to work hard for everything, not even just in football but in life. And when you have a team around you it makes it a lot easier,” Quick said, ”I mean I think it has made me a tougher person, cause I don’t feel like I am any different from anyone else, but I have gone through alot more than most people so it has made me stronger and tougher in everyday things.”

The hard work that Quick put in to earn a spot on Wando’s Varsity football team has paid off as he finished his senior season and 4th straight year representing Wando.

“I would say it is definitely worth it all the hard work and everything. It means a lot to me because it kind of gave me a purpose; whenever I was mad about my leg or whatever and through surgeries I had a reason to get back to the best I could get for football and I am thankful for that. It is kind of bittersweet with my senior season about to end,” Quick said.