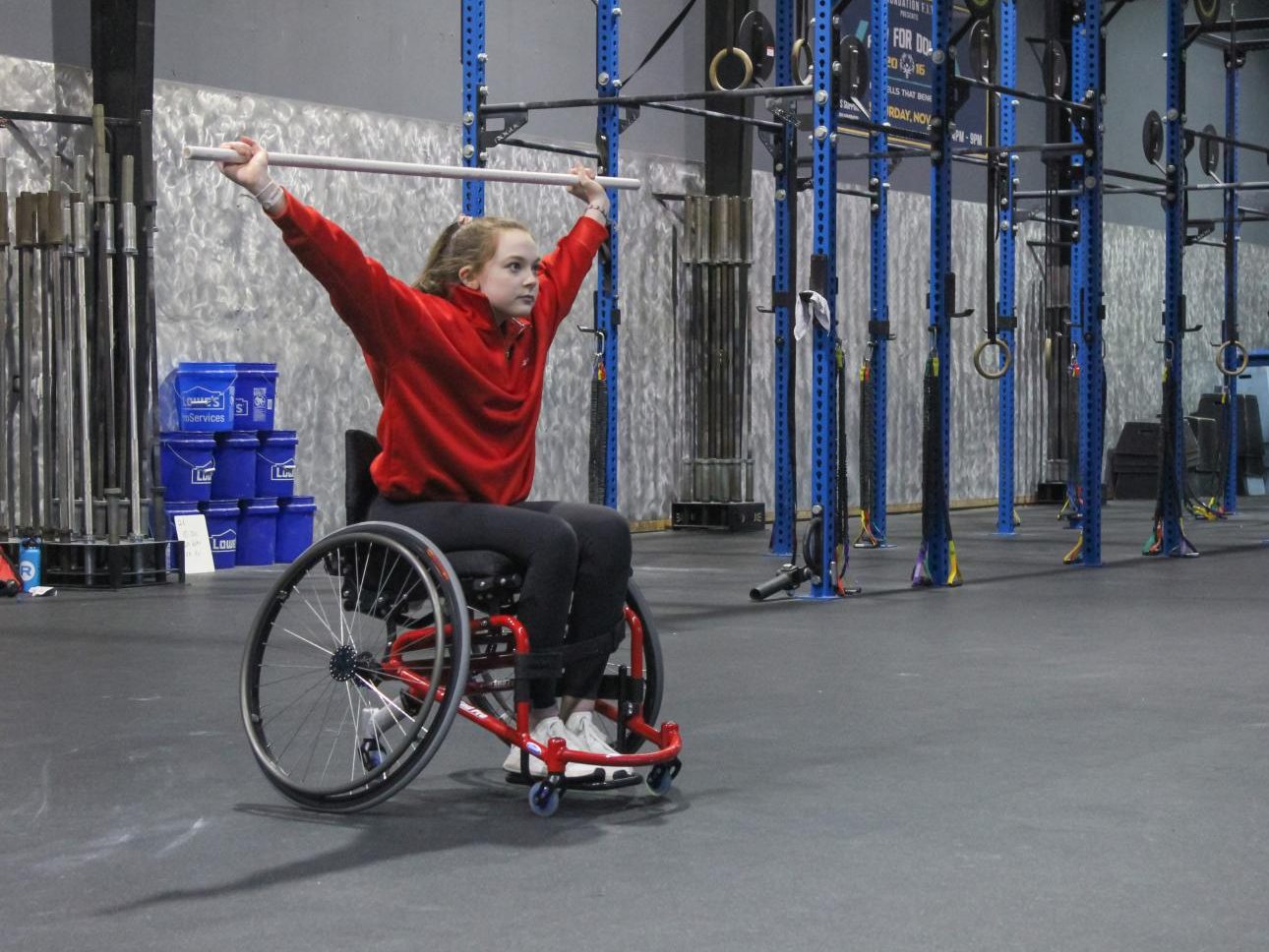 Freshman Sydney Fowler lifts a barbell above her head in an overhead press. (Emma Martin)

Freshman Sydney Fowler lifts a barbell above her head in an overhead press.

Rising above a spinal cord injury

“Live your life to the fullest.”

A cliche passing inspiration to some — but for her, she knows.

Sydney Fowler’s life was simple, just as any seventh grader’s was.

A simple routine, taken for granted by so many.

But it all changed that day. Those days are carved into her brain, so vividly remembered, almost like it was yesterday. Some things aren’t easily forgotten, and those days, probably never will be.

Fowler spent her Sunday at volleyball practice and that night at a sleepover. She took a nap that day, but still succumbed to her unusual tiredness and went to bed around 8 o’clock.

She hadn’t eaten in two days and still didn’t have any desire to.

When Monday rolled around, Fowler woke up feeling normal and headed to school. But it was during second block that she started experiencing odd pains and what she thought was heartburn.

After struggling to talk and move and sleeping in her teacher’s classroom during recess, Fowler’s dad picked her up from school.

The pain only got worse. Fowler barely slept due to the fact that the only way to avoid excruciating pain was to sit up straight on the couch. She decided not to go to school the following day.

Instead, Fowler and her mother went to Health First, anxious to do anything to stop the pain. They arrived 30 minutes before it even opened.

That diagnosis didn’t sit well with Fowler. It didn’t make any sense, but she was happy just to have some kind of answer.

That was, until the pain got 10 times worse and she spent her time, unable to walk, screaming in pain on the couch.

This time she went to the emergency room.

Fowler was excited to finally have an answer, until her treatment turned out to just be more pain medication. Already on so many that weren’t doing their job, Fowler was once again discouraged.

Then Fowler started to lose control of her legs. Uncontrollable spasms rocked through her and caused her to stumble, until her legs buckled underneath her and she was forced to go back to MUSC.

Fowler sat in a wheelchair for the first time that night. She sat in the waiting room, uncomfortable, but when she tried to move from her seat, she found that she couldn’t stand.

Her dad carried her to the exam room and doctors swarmed all around her from various medical fields.

No one knew what was wrong. An MRI was called for, but wouldn’t be available for another seven hours. Seven hours spent waiting for the diagnosis that would change the course of Sydney Fowler’s life forever.

Adjusting to a new normal

After the two hour head to toe MRI scan, which involved a painful backboard, Fowler spent the next few hours struggling to sleep, listening to weird country music, when a neurosurgeon came in.

Still unaware of what was wrong, surgery was decided to be the best course of action and Fowler was rushed off to remove the unknown mass which was pushing on her spinal cord. The next day, Christmas Eve, she was once again brought into surgery to remove what was left of the mass, and the diagnosis was finally made.

Fowler was diagnosed with staph infection (which is what the mass turned out to be), but the doctors have been unable to identify where it came from. One day she was fine, and the next — paralyzed.

“We don’t really know where it came from, it’s a mystery. One day it was fine, then I just fell,” Fowler said.

And it’s not our fault, but in our minds it’s like, ‘why didn’t I think of that?”

The days began to run together after that. Twenty-one days went by while Fowler was paralyzed in the pediatric hospital.

The next step was rehab. Atlanta was the best facility that had the rehab therapy Fowler needed, so they relocated to Georgia for the next few months for her inpatient rehab.

Jan. 7, 2019 marked the day outpatient rehab began. Fowler and her family lived in the Ronald McDonald house and Fowler spent her days adapting to her new reality. She learned how to sit up, roll over, do wheelies and ultimately regain as much strength as possible.

Next was robotics, where she learned how to move her toes, build her abs, balance and where she discovered her passion of waterskiing.

When August rolled around, it was time for Fowler to return to school as a freshman. She was not only returning to school for the first time after the incident, but she was also starting an entire new school at Wando.

“It’s been really good, I’ve made a bunch of friends,” Fowler said.  “It’s easier than I thought honestly, cause I was really nervous about how kids would react and I definitely do get stares and looks, but you just kinda learn to deal with that. I think when I see people stare at me I’m just like, ‘I probably would’ve stared at someone else before too’ like that’s just second nature. You’re interested, you want to know what happened to them — why are they in a wheelchair? I get it. So, just relating is helpful. They’re just curious.”

Living life to the fullest

Her life was simple, until it wasn’t.

Fowler’s life changed in a way she never imagined possible.

“And at the time I think you’re so naive that you’re just like, ‘oh it’ll be fine, they’ll figure it out,’ you know,” Fowler said. “You don’t think like, ‘In 24 hours I’m gonna be paralyzed.’ That’s just not what you’re thinking about, especially being a healthy, volleyball playing teenager.”

She’s just sort of tackling this with so much… hope.”

Wake up, go to school, leave at 2, go to therapy and then go to cross fit and then come home, and then homework, lots of homework.

“She’s pretty amazing,” Sydney’s mom, Christi Fowler, said. “She’s just sort of tackling this with so much… hope. She’s just patient with her body and she’s so hopeful and she’s not discouraged by what happened, which is amazing. I think I have moments of sadness probably much more than she does. She’s just like ‘well, this is what happened and this is what God has for me and I can choose to be positive or I can choose to crawl up in a ball’ and she said, ‘what’s that gonna get me? I curl up in a ball and that’s not gonna get me recovery, it’s not gonna get me a happy life.’ She’s really choosing joy throughout the process which is pretty amazing from a child who was 13 when this happened.”

Despite every wrong diagnosis, every day of excruciating pain, and every bad thing being thrown her way, Fowler never lost her positivity, her will to push through, stay strong and fight against all odds.

Maybe she’ll walk again one day, but until then, Fowler intends to live every day to its fullest.

“There is a chance. But it’s definitely gonna be hard,” Fowler said.

“My biggest hope is that she gains full recovery,” Christi Fowler said. “I mean that’s my selfish hope for her as a mom, is that she gets full function back and that I can see her again, playing volleyball and walking upright at prom and those things. I don’t know if that’s how her story is gonna end. I pray for a happy ending, but I don’t know. But that would be amazing. If she could continue to work hard and…right now there is no cure, but maybe one day in her lifetime she can be a part of a clinical trial or some groundbreaking science that would help her walk again.”

Having already made so much progress — learning to scuba dive, playing wheelchair rugby, swimming, completing in a small triathlon, all with just her upper body — Fowler also now waterskis and hopes to one day compete in the paralympics. In the meantime, Fowler and her family work together to fundraise and have even been able to provide an exoskeleton machine for Roper Saint Francis Hospital.

“I mean it was scary, but like, I just knew that everything was gonna be okay,” Fowler said. “Like it in the moment it was obviously scary, but…again you just have to stay positive and just keep going and I feel like it happened to me for a reason and so might as well just live my life to the fullest.”