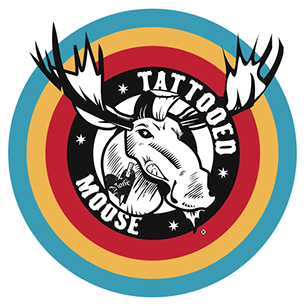 I saw the Tattooed Moose on Guy Fieri’s Drive-ins, Diners, and Dives. From the outside and the inside, it is most definitely a dive.
It’s far from the main, gentrified streets of downtown Charleston, down Morrison Drive. Every inch of permanent space inside has Sharpie-d graffiti: from the bathroom to the window blinds. Animal heads and framed posters hang on the walls, with the frames all painted with scribbles from past patrons.
Despite being kind of atmospherically intimidating, the Tattooed Moose has a spunky attitude about it that matches its food.
The menu is as unique as every marking that clothes the walls, with their staples being duck fat fries and Mike’s Famous Duck Club, which includes duck confit, garlic aioli, bacon and hickory smoked cheddar. While it doesn’t seem like frying fries in a different fat would make that much of a difference, they were fantastic (and the garlic aioli dipping sauce also helped). My mom had the Duck Club and said it was fantastic.
I myself had the Tattooed Moose Burger, which had a special sauce and a welcome return of that garlic aioli. It was huge and it was great. While its size goes to its detriment (since it was delicious and I couldn’t physically finish it), everything else about it was stellar. Whatever is in the sauce gave it a kick, but not to a sweat-inducing degree, and it was by far one of the best burgers I’ve had in Charleston. Sandwiches range from $6.50 to $15.
The restaurant itself takes a little getting used to, but it has a distinct atmosphere compared to other restaurants downtown. Adding to that is its spectacular and unique menu that has something different for everyone. All that considered, the Tattooed Moose is a place definitely worth checking out.