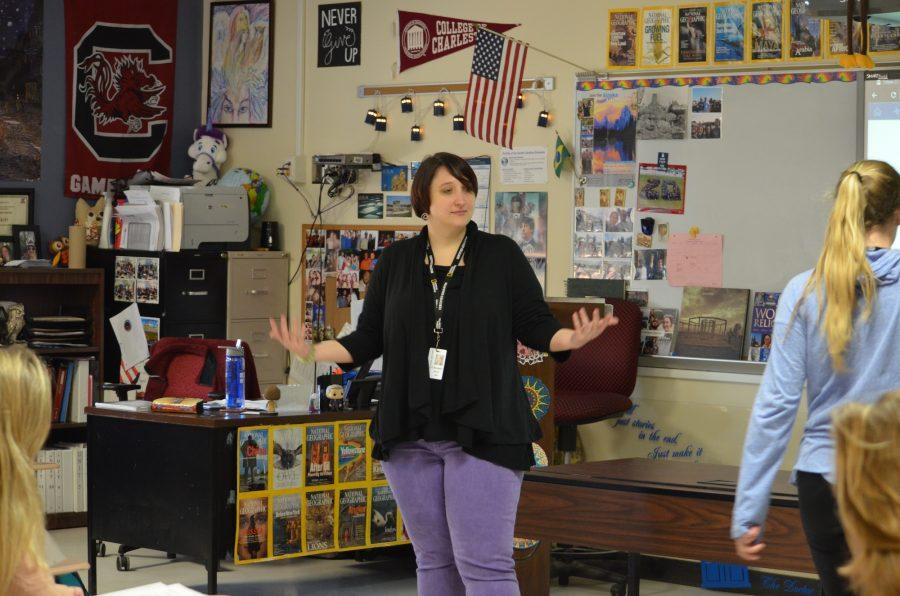 Nestled into the back of Freshman Academy is World Geography teacher Christa Simpson. She sits quietly, seemingly waiting for someone to open the door. She keeps a bin of old letters, cards and photos from her old students to remind herself why she teaches — and she may or may not have kept an emo picture of yours truly.

When the door to room E-216 is opened, it’s her world. The room is flooded with items of her interests. Harry Potter drapes over the door. Doctor Who memorabilia spills across her desk. Though there is one theme that isn’t a show, film or activity

Her room oozes with the world.

“[My husband and I] went to Europe in 2015 for six and a half weeks. We visited eight different countries and it was absolutely amazing,” Simpson said. “I cannot wait to go back.Prague is our favorite. It is spectacular, Hitler loved the city so he didn’t bomb it. It’s like walking into the middle ages.”

She daily teaches over 100 students about the rest of the world — their culture, architecture and way of life. Her passion — her students say — is unmatched, and it is obvious how much she loves to learn about others. Enough of the United States. Enough of Charleston. Christa Simpson wants the world.

Though, Simpson doesn’t just visit Europe. She doesn’t want to get a taste of life outside the borders.

Simpson wants to live in Europe.

“I have family in Europe, so it’s a little easier to travel. In the grand scheme of things and of life, we want to live in Europe when [my husband] finishes school,” Simpson said. “He’s in school for electrical engineering. He’s really linking at the green side of things. So, we’re either going to have to move out west or we’re going to have to move [to Europe].”

The culture difference to Simpson is striking. “Instead of suburbs, you have villages, and the villages are very tight-knit communities. When they sprawl out of their cities they have these villages with, you know, one restaurant, and everyone knows each other,” she said. “It’s 30 houses or something. There’s fields all around, it was really cool just seeing it.
“The Netherlands was really neat because we took a train all the way from Germany to Amsterdam, just seeing the countryside was really cool… I like it over there a lot,” she added.