The Nutcracker is disappointing rendition of its original ballet 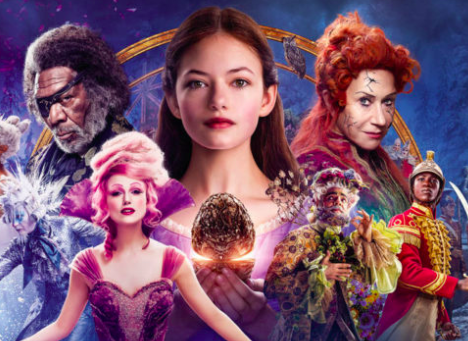 I’ve never been more disappointed in my life. And that is coming from an Italian who was recently diagnosed lactose intolerant.

Disney’s new movie The Nutcracker and the Four Realms, directed by Joe Johnston and Lasse Hallstrom and staring Mackenzie Foy as Clara and Keira Knightley as the Sugar Plum Fairy, seemed to be a beautiful remake of a loved classic.

In reality, the only award they should be getting is “how to make a movie look good by piecing together all the somewhat interesting parts into the trailer.”

The first couple minutes were promising, but once I saw Morgan Freeman trying to channel his inner pirate with an awful eyepatch that is supposed to make his character seem “mysterious,” I couldn’t help but sigh.

Every single scene in the obnoxiously long movie was so underwhelming I saw the seven year old two rows back from me with glazed eyes. The supposed “climax” of the story didn’t make me worried for the characters’ fates, and I am very dramatic, so to make me feel nothing is very impressive.

Maybe I am giving the movie a hard time because I had high hopes to relive one of my favorite stories from my childhood. Like most teenagers my age, I am having an identity crisis and am trying to cling to my youth for as long as I can, even if only for an hour and 40 minutes. Surprise! That didn’t happen.

Also, what in God’s name is with every British child in movies saying “mother” and “father” every two seconds when talking about literally anything? We get it, you’re proper and privileged.

The scene I was most excited for, Misty Copeland’s dance sequence, was the most tragic of all, even more so than Keira Knightley’s autotuned voice. No goosebumps, no staring in awe, nothing at all from me. I gave up at that point because if Misty Copeland couldn’t save this movie, nothing could.

The only — and I mean only saving grace for the film were the visuals. I could pick from multiple scenes if I wanted a mystical background for my phone lock screen, but that doesn’t mean I actually have to watch the movie to do so.

The plot twist is predictable, the antagonist is strangely attractive and my mother who was beside me fell asleep.

Then again, this is a movie for 12 year olds, but it didn’t have to be. They could have turned a true classic into something people of all ages could have enjoyed in a new era. Instead, the gave us a dull piece of garbage that quite honestly ruined the rest of the christmas season for me.

If you have a little sibling or even children of your own and you want some good old fashioned family time, sure, go ahead but you’d be better of with Barbie in the Nutcracker.

That right there is a true gem.