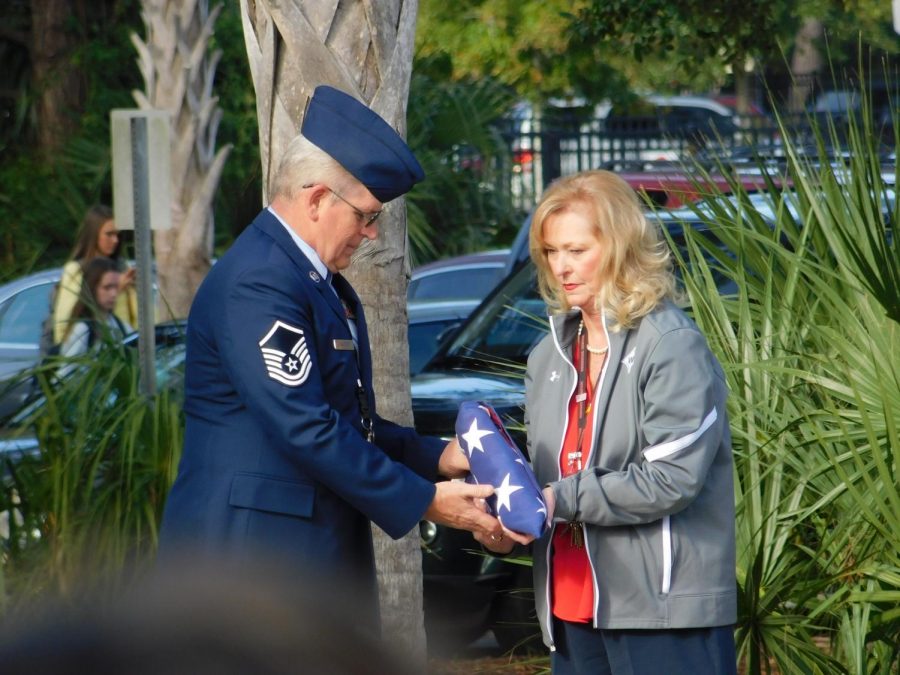 The November weather was brisk and chilly at 44 degrees when the Wando Air Force JROTC conducted their Veterans Day flag ceremony in front of the main building Nov. 11.

This day marks the 100th observance of Veterans’ Day in the United States, first observed in 1919 to commemorate the anniversary of the end of World War One and observed annually since.

Students let out of their first block classes crowded on the sidelines to watch and pay their respects.

The flights of cadets were lined up in columns standing at attention, facing towards the flagpole across the pickup lane where cadet officers were lined up to speak.

At 9 a.m., the crowd hushed up and choir student Connor Leary gave a performance of the Star-Spangled Banner.

“I just wanted to come out here and honor the veterans. I mean, I feel like if anyone should get any support from anyone, it should be the people who have fought… they should get praise from the people around them for enlisting and helping to serve our country.” Connor said was his reason for volunteering for the ceremony.

After the song, the United States flag was brought out by the JROTC color guard, unfurled and raised to full mast, then brought back down to half mast in remembrance of those who gave their lives for this country serving in the armed forces. A prayer was given for those in service both past and present, alive and fallen

Following that, the names of those Wando alumni who had been killed in action were read out, and the bugle call “Taps” was played in solemnity.

Dr. Sherry Eppelshiemer, principal of Wando, was called to the podium to give a few words for the occasion as JROTC cadets were called to parade rest. She commended US servicemen for their qualities of “courage, pride, determination, and selflessness”

Members of the Wando faculty who are former servicemen of the Air Force, Army, and Navy were called up by Dr. Eppelsheimer to be recognized and receive a medal – a token of the school’s appreciation. She concluded with a reminder to “honor and appreciate those who served”

Finally, a wreath was laid in front of the flagpole, a universal symbol of the circle of life given in thanks.

“It’s really, really easy for people not to see the impact of wars…  especially like today, when we mentioned that we had two Wando alumni that had lost their lives in military service. The kids, unless they’re associated with a military family, they, they don’t know it, they don’t see it. They don’t feel it. And so we want to keep alive the memories of the people and the sacrifices of all the veterans.” Staff Sergeant Michael J. Gardener, who helped organize the event, had to say.