This conventional method and cycle of learning stands true in many classes. But with its peer-guided docent system that brings the student into the shoes of the teacher, and its ambitiously detailed set of displays for students to explore, the Anne Frank House exhibit strives to redefine the modern expectations of learning as it arrives in the Wando media center during the month of October.

The Anne Frank House, located in Amsterdam, works with the University of South Carolina Education Department to educate the public on the Holocaust on a deeper level, preserving the hiding place of Anne Frank and her family as they attempted to escape the Nazis but also branching into a educational mission to inform youth about Anne Frank’s story and the Holocaust in general through a traveling exhibition in various high school.

Honors English Teacher Patrick Martin helped bring of the Anne Frank House exhibit to Wando. The addition of a Holocaust unit to freshman English classes inspired him to give the kids an opportunity for further education on the subject.

“The exhibition it will be in the media center, so it’ll be up and on display most days, and when a class or group from outside wants to come in for a tour, they will have to come in and schedule it through me or another teacher,” Martin said. “They will find a student who is available for that period to take the tour guide through the exhibit and each of the panels.”

One of the most unique aspects of the Anne Frank House exhibit is the manner in which tours are administered: students will be given tours by their own peers. Student volunteers are trained to become docents over a two-day period, and then proceed to educate their fellow classmates on the many different stories and themes they learned about Anne Frank and the Holocaust.

Martin said he was excited by the idea of students being able to teach each other about the actions and issues presented by the Holocaust as a way for students to think more deeply.

“I know when I was younger I learned so much from my three older brothers, and I feel like I learned from my peers on a really deep level. I’m such a big believer in one-to-one instruction,” Martin said, “and one of the things I think is so beautiful about student-to-student instruction and peer-to-peer work like that is that when you are in a classroom, there is only one teacher and sometimes as many as 27-30 students, so you are limited with how much direct instruction you can give one to one, but students at any point can be giving one to one instruction to one another. I think that’s really awesome.”

This peer-guided system provides an opportunity for students to talk with each other on the heavy subject of the Holocaust, according to S.C. Project Director Morgan Bailey. She said the program, which moves from school to school, focuses on students becoming docents and having an instrumental part in the process.

“We feel like young people get a lot of valuable learning from other young people. There’s only so much sitting and lecturing that you’re going to learn from, and there’s a time and place for that, but there’s a major value in learning from people of your own age, who are going to bring it all down to you on the same level,” Bailey said.
The peer program also acts as a catalyst for students to find their voices on a difficult subject and to give young people an opportunity to have a say in the world around them — an opportunity Anne Frank as a young girl was not even considered.

“At the end of the war, to take it back to the history for a second, Otto Frank (Anne Frank’s father, and the only survivor of the Frank family after being found by the Nazis) read Anne Frank’s diary and said he was struck by how mature she was for her age, and we are talking about a time in history where young people weren’t necessarily given an opportunity to speak up on issues facing the world today, meant to be seen but not heard from,” Bailey said.

“Otto realized [Anne] was highly intelligent, and that she was a wise girl with many opinions on the things around her, and as Otto oversaw the Anne Frank House coming into existence, he thought that young people should have a say and an opportunity to use their voice and speak on societal issues around them, even hard issues on things such as prejudice and discrimination,” she continued. “There’s no reason young people shouldn’t have a say in that. That’s kind of the brains behind the whole operation and why we are so committed to this peer guided approach, or at least that’s one facet of it.”

These issues of discrimination, prejudice and hatred among people that the Holocaust presents — while obviously not to the same horrifying extent — are issues that still need to be very important focuses of discussion today among the youth, Bailey said.

“So one of the activities during the peer guide training is looking at pictures of Nazi Germany before and after the war and the Holocaust, and we have a conversation on what we see in those pictures, what we think is happening in these pictures, what messages these pictures are sending, and do we think maybe there is some propoganda going on in these photos,” Bailey said.

“Having those conversations from a historical lens, I think, is very powerful for kids or for anyone for that matter, but especially for young people to look back and say ‘yes this was propaganda’ or if it was a purpose to convince people of something. I really think these are skills we can apply today with as much information we have at our fingertips, and us always asking, ‘is this authentic? Is this legitimate? Is this the whole story? Has this photo been cropped? Has this story been told with only one audience in mind?”

The experience should not simply be for learning about the Holocaust and its story, but also should act as a way to develop students’ abilities to think critically about the issues of both the past and the present, according to Bailey.

“In reality not only is that superficial, but it’s also just not true. People have been hating the Jews for years and years and years and there was never a Holocaust. Some people say ‘Well the economy was bad so Hitler was able to capitalize off of that and create a Holocaust,’ but other countries have had bad economies and that didn’t create a Holocaust, so that’s definitely not the whole answer either,” Bailey continued. “It’s more complicated than just saying a quick little statement, and I think that’s a lesson that can be applied in other areas as well. The systems and all of the problems we see today in society aren’t so easy to just give a simple solution because the problems aren’t simple, and so being able to think through whatever the topic is in general in a more complex way and simply recognizing that it’s more complex I think is an important first step to actually accomplishing anything.”

In this way the Holocaust is a prime example of a situation known but not understood — generalized but not elaborated on. It stands as a time that will never be forgotten, but will always be misunderstood. The Anne Frank House looks to change that.

Students will not only learn about this time in history, but have the opportunity to truly own the information presented to them.

“I think any time you can become a docent, tour guide, or purveyor of information like that you become an owner of it…” Martin said. “These are students who want to take their knowledge of the Holocaust to a deeper level, and so once you own something like that, all of a sudden I think its with you for life. It’s certainly been true for me.” 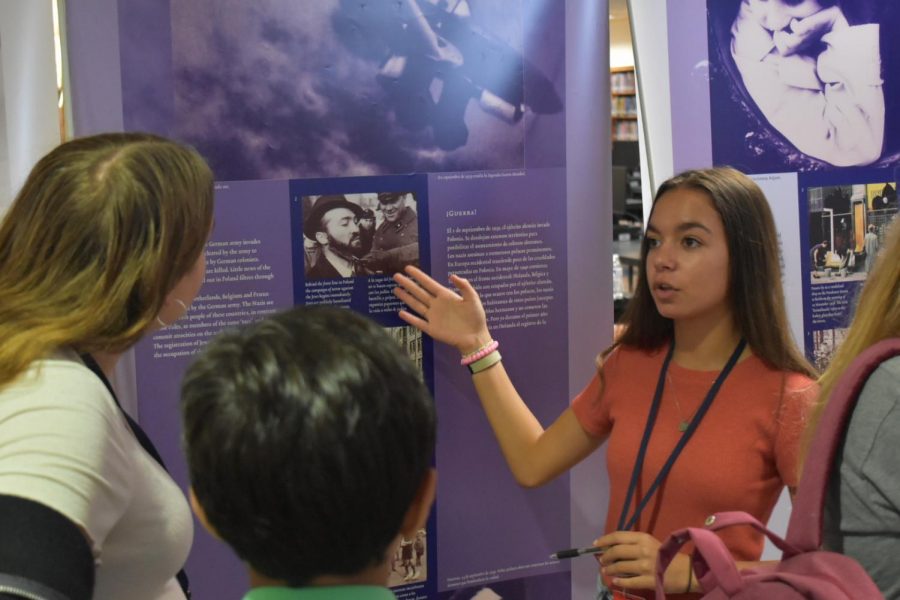