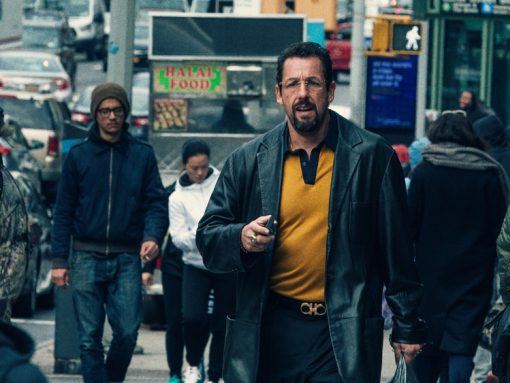 “Everything I do is not going right.”

So whines Adam Sandler, adorned in gold and diamond rings, sparkling with the reflection of a stark red trail of blood oozing from his nostrils. This is no Happy Gilmore.

In Uncut Gems, Sandler rises to the role of Howard Ratner, a compulsive gambler and a diamond dealer who comes to own a rare Ethiopian black opal: a glittering, uncut, beast of a rock not unlike Ratner’s skewed vision of his own life as it continues to crumble.

The movie opens with a journey through the inside of the opal, its lustrous pathways as the hues of red and gold turn to deep blue, a heap of navy spiderwebbing through Howard’s innards as we witness him suffering through a colonoscopy. This transition is a paragon of a metaphor for what the opal truly represents: Howard’s gold sickness, the essence of all of his problems, of Howard as a whole.

That very opal spends the rest of the film out of reach. As Ratner never ceases to stop on his quest to recover the opal, neither does the action. It’s exhausting yet thrilling. In debt to his sketchy brother-in-law Arno, Howard continues to promise to rebuild burnt bridges caused by his careless bets with more, riskier bets that verge almost into mania.

As Arno brings in muscle in the form of two thugs, Howard stays alive despite multiple instances of chaos, one of which left him naked in the back of his own car at his teenage daughter’s school play, by promising to make the deal of his life by selling the opal at auction for a million dollars.

Arno and his thugs aside, Howard’s greatest enemy is himself. As he throws away his family in the suburbs for a young girl who works at his store (and doubles as a groupie for uprising pop star The Weeknd) who is connected to him mostly because of their shared greed, one can still feel compassion for Howard that must only come from Sandler’s undeniable warmth and magnetism, even in such a role.

Uncut Gems shows the cyclical nature and intoxicating coupling of addiction and self-delusion, splayed against a background of diamonds, gold and most importantly the opal. And this is what makes the film so riveting: Ratner’s submission to the sacred gleam of the opal gives us the portrait of a man on the edge. A man unable to stop, unable to juggle all the balls he’s thrown in the air. It’s excruciating, yet exhilarating to witness how they fall.