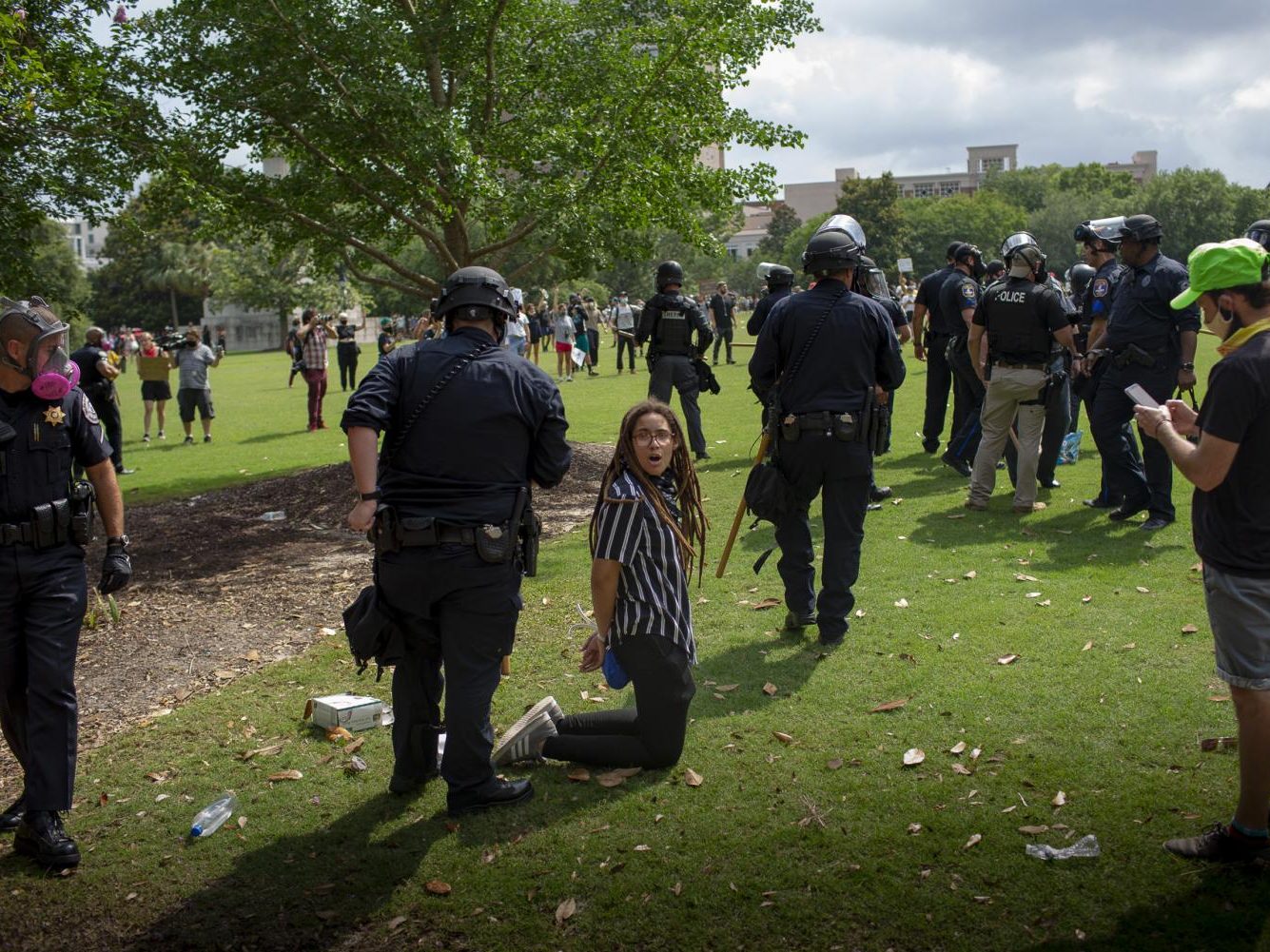 Senior Barinwa Wiwugh leads chants at a Black Lives Matter protest on May 31. Shortly after the photo was taken, she was detained by the police presence at the protest. “There were so many different people of so many ages, of so many races over there. That just makes me so happy,” Wiwugh said. “I led some of the chants with ‘no peace’ and others said ‘no justice.’ ‘Black lives matter,’ ‘hands up’ then ‘don’t shoot.'” (Hunter Musi)

Senior Barinwa Wiwugh leads chants at a Black Lives Matter protest on May 31. Shortly after the photo was taken, she was detained by the police presence at the protest. “There were so many different people of so many ages, of so many races over there. That just makes me so happy,” Wiwugh said. “I led some of the chants with ‘no peace’ and others said ‘no justice.’ ‘Black lives matter,’ ‘hands up’ then ‘don’t shoot.'”

Not all police officers are bad, senior Barinwa Wiwugh kept reminding herself as the three officers advanced to arrest and detain her at a Black Lives Matter protest May 31.

Not all police officers are bad, she reminds herself as she ducks and tries to escape the sound of rubber bullets.

Not all police officers are bad, she reminds herself picturing the video of George Floyd pinned down by a Minneapolis police officer.

Wiwugh was one of the 35 individuals arrested at the protest May 31 for “unlawful assembly.” She was late to the protest — arriving at 3:45 p.m. to Marion Square, she said. She started coming to these protests to pass out water to the protestors.

“I just see this row of police,” Wiwugh said, while protesters were laying down on the grass conducting a eight-minute moment of silence for George Floyd. Officers at the scene were shouting that in 10 minutes, protesters would have to disperse because it was an “unlawful assembly.”

“How is this an unlawful assembly?”

She got close to the police line. She led the chants:

“No justice,” the crowd then echoed “No peace.”

The police advanced forward, she said.

“They pinpointed me for being the girl that yelled,” Wiwugh said. “So when they pointed at me, I was like ‘I’m not even going to try to run right now,’ so I just kind of complied with what they said.”

The officer that detained her “didn’t want things to go down like this,” she said. “It sucked that both of us were in that situation.”

She, along with G and the other detainees, waited for the next van to arrive at the scene, where they were loaded into a “girls’ side” and a “boys’ side” for an hour-long ride to an arrest station she didn’t know the location of.

Because she is a minor, they let her call her parents to pick her up at around “six-ish,” which was the last time she asked for the time while detained. The others had to be processed and post jail, she said.

Wiwugh’s story is one of many of the people protesting in the worldwide Black Lives Matter movement, ignited even brighter after the death of George Floyd to the Minneapolis police department. Protests in Charleston started May 30 and have continued since then on a daily basis.

Senior member of the Charleston chapter of Black Lives Matter Marcus McDonald planned the original May 31 march, where protesters were blocked off at their original starting point — the Ravenel bridge — their planned protest spot — the Mother Emanuel AME church — but finally were able to take a moment of silence at Marion Square, he said.

The Charleston Black Lives Matter organization aims to plan safe and meaningful protests for the community to get engaged in civil discourse and peaceful assembly for racial equity and justice, McDonald said. For subsequent protests in Charleston, the chapter provided masks, snacks and water for protestors to keep everyone safe.

“We are trying to work with the police, but also let them know like ‘you have to change. This is not optional,’” McDonald said. “We don’t want to have just protests and not have action behind it.”

Some of the changes Black Lives Matter would like to see in the community is getting rid of arrest and pull over quotas and more involved racial police audits.

“As a black man, you just have that preconceived notion — you have to be more careful than everybody else because everybody else thinks that you’re guilty before you do anything,” McDonald said.

The police seemed to be playing the offensive at the May 31 protest, he said, because the protest the night before — “they just saw destruction… businesses got destroyed.”

Wiwugh saw the events of May 30 occur, when she showed up to the protest again after her shift ended. She didn’t want to be anywhere near the violence or looting, so in her Black Lives Matter sweater and bandana around her nose and mouth, she walked home, she said.

“We [at Black Lives Matter] don’t condone violence. We promote peace,” McDonald said. “It sucks that some people are taking advantage of it.”

As a black man, you just have that preconceived notion — you have to be more careful than everybody else because everybody else thinks that you’re guilty before you do anything.”

During their moment of silence, police started telling people to disperse, and before the eight minutes were up, “there were several people still laying down — [police] were shooting them [with rubber bullets] on the ground. It was horrific,” McDonald said.

He was also hit with a rubber bullet and tear gassed that day, along with some of the other protesters, he said.

McDonald and Wiwugh have dedicated their lives to the sentiments and fight of the Black Lives Matter movement. Wiwugh was inspired after the death of Philando Castile to start fighting this cause, she said.

“My career has to fall into something that can help minorities… I can’t just do nothing,” she said. “We need change right now. Even if it gets real nasty, real quick, we need to use it to change something. We need to use it to make a point. We can’t just sit back anymore because that’s what everyone has been doing… We can slow the process of it getting really [violent], if the police join us.”

McDonald is also in charge of coordinating the @chs_blm social media outreach, which has been a main funnel of information surrounding the protests, ways to get involved and promoting black-owned business in the area, he said. The main focus is to keep the community engaged and “build the community and rebuild the city,” he said.

Following the protests, “We are moving into the second stage, walking across the aisle and shaking hands,” McDonald said.

Voted and approved on the evening of June 9, the Commission on Equity and Racial Conciliation is becoming that bridge between the community and city council and mayor. Co-chair of the commission, City Councilman Jason Sakran outlines this program as a “community effort” in creating the recommendations the city council will give to Mayor Tecklenburg at the end of a 90-day period, he said.

“The big objective is to basically look at every practice, every policy that the city of Charleston and to determine how it either helps or detracts from our overarching goal which is to ensure racial equity and justice within our city,” Sakran said. “The first step is to appoint folks from the public to participate in the commission… It’s really looking at the whole system. So as I said, if you are looking into the whole system, that includes our housing policy, our HR practices, of course our policing practices.”

There have been increasing calls for city councils, like the one in Minneapolis who unanimously voted to replace their city policing model, to “defund the police.” While he has received emails and calls about a reallocation of funds or defunding the police department in Charleston completely, this decision is “really up to the community” once the commission is up and running, Sakran said.

The subcommittees that Sakran wants to establish within the commission are ones looking at housing and zoning practices, community policing, economic opportunity of black business owners and increasing involvement of the city in education.

But the protests… have just amplified the need to really look deeper and have tougher conversations with folks and speed up our progress.”

“I’ve been on the council since January… We have done a racial bias audit with our police department, and that is something that we have done previous to [the protests] and have been in the works for the past year or two,” he said. “The city has taken some steps forward… But the protests… have just amplified the need to really look deeper and have tougher conversations with folks and speed up our progress.”

These protests have sparked international interest in police brutality and have caused local governments to reevaluate the interactions between police and the community.