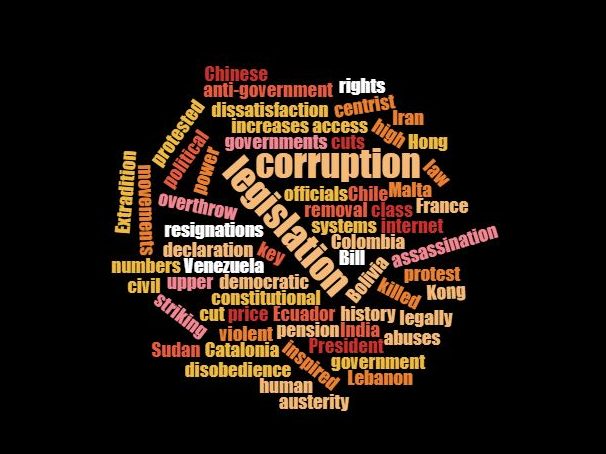 2019 protests in a nutshell

2019 saw unusually high numbers of protest movements against governments in countries around the world. These were over issues such as austerity, corruption, abuses of human rights and others, and saw high levels of support and success at inciting change. Here we look back at some of the year’s most significant movements.

Hong Kong: These protests are ongoing actions against recent government legislation that introduced the Extradition Bill. This bill would allow the government to legally try Hong Kong citizens or residents for crimes committed in Hong Kong according to Chinese law. The protests began in March 2019 when a sit-in was conducted. This action inspired many more citizens to protest and in October of the same year, the Extradition Bill was withdrawn. Hong Kongers continue to protest for continued and expanded autonomy.

Latin America: For the better part of the last decade, popular discontent with government corruption, poverty and austerity caused by economic conditions has grown in Latin American countries. Chile, Ecuador, Colombia, Venezuela and Bolivia all experienced mass protests last year, some resulting in the overthrow of governments or resignations from key officials.

Lebanon: Protests against new taxes by the Lebanese government spiraled into mass civil disobedience over government inefficiency and neglect of public welfare, causing the resignation of Prime Minister Saad Hariri and calls for the formation of a new government.

Sudan: The protests began after Sudanese President Omar al-Bashir made cuts to food and bread subsidies in December 2018. The citizens called for the removal of the president and in April 2019 he was replaced with a council of generals. Sudanese citizens did not feel this change was sufficient and continued to press for more democratic systems. The two sides came to an agreement in August, signing a constitutional declaration that would slowly permit citizens more political power.

Iran: Wide-scale protests in Iran began as outrage towards increased fuel prices, but have grown to encompass dissatisfaction with Iran’s theocratic government that has been in place since 1979. Many protests have turned violent and over 1,500 citizens have been killed since they began. To disrupt the planning of protests on social media, the Iranian government cut internet access to much of the country for six days, the largest internet outage in history.

France: The Gilet Jaunes (Yellow vests) protests from 2018 spilled over into last year. They are over price increases and pension cuts proposed by the centrist government of President Emmanuel Macron but have grown into a much larger movement against government austerity and policies favoring the French upper class. A recent tactic used by electricity workers striking as part of the protests is to cut power to wealthy areas and power poorer neighborhoods at no expense in an act of solidarity.

India: In December 2019, Indian parliament passed a law that restricted the path to citizenship for Muslim immigrants from neighboring countries, pushed through by Prime Minister Narendra Modi and his Hindu nationalist BJP party. Hindus and Muslims both in India have protested against its enaction, decrying it as a form of discrimination against Muslims.

Catalonia: In the wake of the failed 2017 Catalonian independence referendum, which saw the Catalonian government briefly declare independence over its disputed results, nine leaders were tried in the Supreme Court of Spain and are at risk of nine to 12 years in prison. Protests began with blockading of the Barcelona’s international airport and have continued with a general strike called by pro-independence trade unions.

Malta: Daphne Caruana Galizia was a well-known anti-government corruption journalist who was killed in a car bombing near her home in 2017. Many Maltese citizens saw the assassination as proof of government corruption and sought the resignation of the sitting Prime Minister. After months of protester activity, Prime Minister Joseph Muscat announced plans to step down in mid-January 2020.