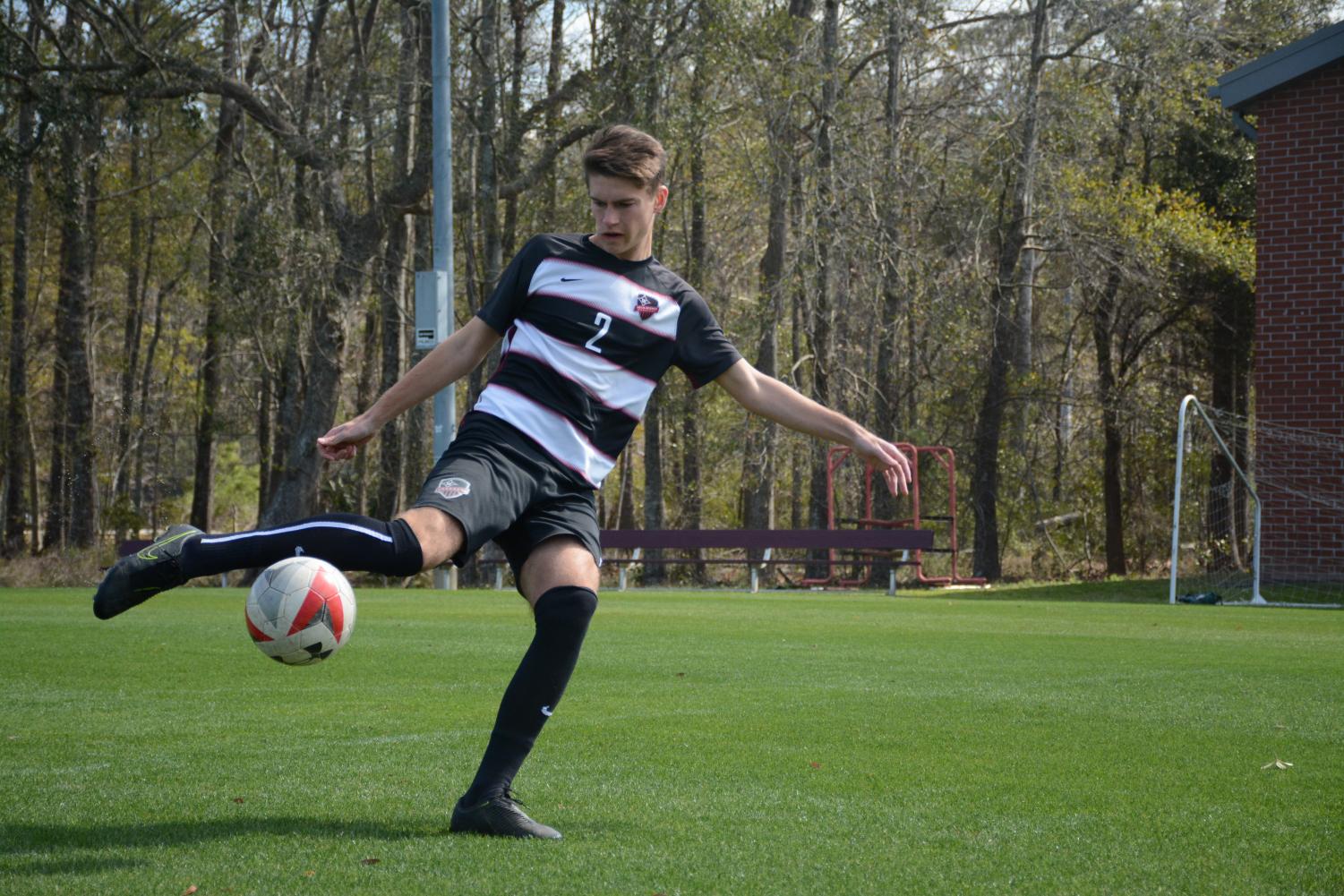 Posnanski has soccer in his blood; Jamie Posnanski, his father, played in the college national championship and for the USL’s Charleston Battery. He has been an integral piece in Evan’s soccer career. (Graham McAlister)

Posnanski has soccer in his blood; Jamie Posnanski, his father, played in the college national championship and for the USL’s Charleston Battery. He has been an integral piece in Evan’s soccer career.

A different kind of goal

A light tug on his ankle jolts him awake. Eyes barely open, he changes in his gear. The sun hasn’t even breached the horizon, but the garage is already hot. Just another school day.

He warms up by juggling the soccer ball on his feet.

It smacks off the passing wall that runs the length of the garage.

Then 11-year-old Evan Posnanski trained in the garage for an hour and 10 minutes every other day with his dad Jamie. He went to club practice three or four times a week. He spent extra hours in the gym. Did anything to get touches on the ball.

“My dad had the entire garage turfed. From like sixth grade, maybe fifth grade up until like almost my freshman year, I’d wake up before school at like five o’clock, five-thirty, and we’d go in the garage and we’d train, and that obviously helped me a lot,” Posnanski said. “Obviously I’d have training after school. So it’d be two trainings per day, and I’m talking when I was twelve years old, eleven years old.”

He fell in love with soccer more than a decade before verbally committing to Brown University, which he did at the end of January. He signed commitment papers Feb. 5.

“Definitely I owe all of my interest in soccer to my dad. If I didn’t play from a young age because of him, I wouldn’t be here right now… He’s the one who’s always taken me out to the fields, trained me, woke me up early in the morning, he’s sort of been there throughout the entire process,” Posnanski said. “And he definitely pushed me to enjoy it, and I owe him that.”

For Posnanski, soccer was more than a high school sport. He signed an amateur contract with The Charleston Battery in September. In an amateur contract, the player may not receive any compensation or resources from the club in order to preserve eligibility. He trained with the club during the fall.

Before Christmas, Posnanski said he wasn’t even sure he’d play college soccer. By the end of the month, he was being courted by Michigan State, Georgetown (Division 1 National Champions) and Brown. He attended the Disney Showcase in Orlando. There were about 30 colleges in the stands that night. After an impressive showing, Posnanski was surprised when the coach of the opposing team in the game came up to him. Trevor Banks, the assistant coach at Brown University, was watching Evan play from the sidelines, not the stands. He gave Posnanski lots of praise on how he played and asked Evan to come up to Providence to see the program.

“Showcase happened Dec. 27-29. January came around. First weekend flew to Michigan State. Second weekend flew to Brown. Third weekend, I had games in Charleston, Michigan State flew down to watch those games. Fourth weekend, went to Georgetown,” Posnanski said. “It was probably the most stressful month of my life. It was like all right, these are definitely your top three choices, and you have to narrow it down within the next three weeks.”

The senior embraced dedication years before he signed an amatuer contract with the Charleston Battery back in September of 2019.

“I wasn’t technically allowed to be on a rec team at that young, but my dad signed me up and lied about my age in front of the people that were signing me up. They said, ‘Is he four years old?’ my dad said, ‘Yes’, and I played on my older brother’s soccer team. Since then, I’ve just been continuing to play the sport more and more, whether it’s been underneath my dad or underneath a different coach,” Posnanski said.

Soccer beats through the Posnanski blood. Jamie Posnanski went to a college national championship with South Carolina and spent time with both the USMNT U-21’s and the Charleston Battery. He has played countless hours of soccer with his son.

“More than anything, [I feel] just incredibly proud. And I think for us what was most rewarding was for him to have the experience of putting in so much work, and there were times when we had questions,” Mr. Posnanski said. “Just to finally see all that effort and hard work that he had put in to be rewarded was the most amazing thing for his mom and me.”

Mr. Posnanski made sure not to push Evan too hard. He wanted him to take to the game on his own will.

“There are times where you realize, oh I’m pushing a little too hard, and you sort of feel that out. And naturally overtime it wasn’t me bringing him into the garage and having him work, it was him recognizing and doing it on his own,” he said. “It was good because it also allowed me to start stepping back a little bit and be more dad, less coach. And ultimately it becomes much more rewarding to see him putting in the time and doing the things on his own.”

In late April 2018, Posnanski was invited to go on trial Sporting FC to try out to their youth academy. In his first training session, a USL player slide tackled Posnanski from behind after he stole the ball from him. Posnaski broke his foot 45 minutes into the session. He couldn’t play for Wando in the playoffs. He couldn’t attend ID camps in the summer. He was nervous.

“That sort of put a complete halt on all recruiting… Breaking my foot was one of the most difficult things in the process…” he said. “In the end, it all sort of worked out. I wish it was a little less stressful.”

“He’s got probably the best work ethic of any soccer player I’ve known from the past 12 years I’ve played soccer. He’s definitely the most committed to soccer of anyone I know, probably has put most hours in if anyone I know,” Sprott said.

Posnanski traveled with the Battery to both Canada and Nashville to compete. He anticipates signing another amateur contract with the Battery for the upcoming spring season. “It will last until I go to Brown. Depending on what time I end up leaving to go to Brown, ‘cause preseason starts earlier obviously than regular school, throughout the summer, I’ll be playing with the Battery a lot more,” he said. “Just because I want to be able to get ready for college soccer, and that’s the best way to do it.”

“He’s very disciplined. He has sort of a long term goal for himself, and that’s to play at the highest level,” Tisdale said. “He’s one of the few that is understanding, you have to make sacrifices right now if you want to reach that goal. By way of socially what you’re doing, and also the extra you have to put in… he’s very detail oriented.”

From a goal against Ashley Ridge in Posnanski’s breakout sophomore year, Tisdale could see the potential in Evan.

“We were at Ashley Ridge, and as a sophomore he turned and hit a goal from about 35 out from a difficult angle. That sort of just set the tone so where this kid is going to be something special, and something that’s going to make good things happen for the next couple of years,” he said.

After a stressful month for the striker, Evan said he is completely focused on the upcoming high school season

“Right now my primary focus is on Wando, ‘cause you know I’m a fourth year senior. I want to get a fourth ring…” he said. “Me, Jackson [Stebbins] and Trevor [Leithausser] have a really good opportunity. I already told Coach [Tisdale] I’d dedicate myself to Wando, so that’s priority.”