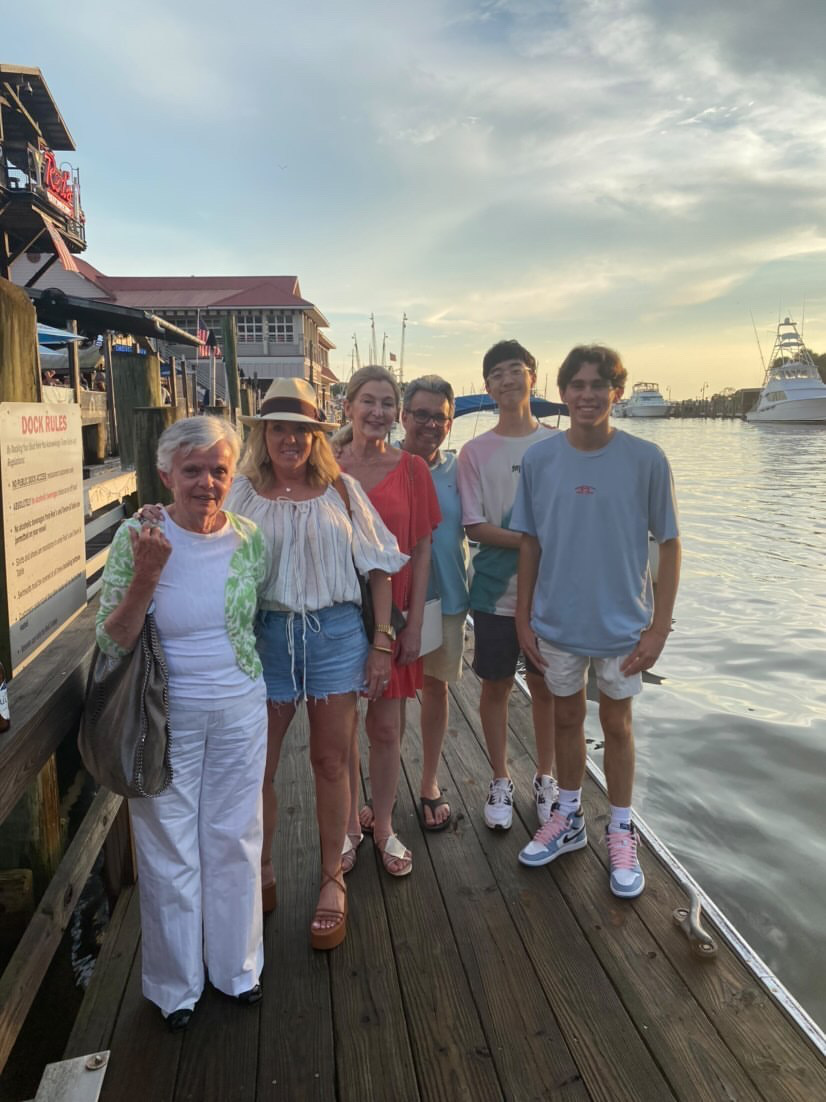 Kim and his family pose on Shem Creek in Charleston. (Provided)

Kim and his family pose on Shem Creek in Charleston.

Mundane things that the average American might take for granted. But for sophomore Jinyoung Kim, these were the things that surprised him the most.

Kim jumped at the opportunity to join a foreign exchange program when it was offered at his school back home. A home 7,271 miles away from the shores of Charleston.

Though he didn’t get to pick the city where  he would spend a year of his high school career, Kim felt lucky when he stepped foot in Charleston for the first time.

“I think I’m pretty lucky,” Kim said. “Charleston is a good place to live in and chill. I think Charleston is very good.”

Despite leaving home, his parents and his brother, and starting a new school in a foreign country, Kim was more excited than nervous.

“At the beginning, yeah, [I was] nervous, but actually when I arrived here, my host family was so nice so I could adjust to America. It was good,” Kim said. “[My parents] were really sad, but they are thankful that I’m doing great in America–not having any problems.”

Kim ventured thousands of miles for a few reasons, the main ones being to improve his English, and to experience high school through a different lens; to experience American culture and learn about the world outside of his home country.

“The most important thing, I think, is improving my English still. Before I came here, my English was not that good…even now. So I keep learning how to speak English,” Kim said.

And in the time he’s been here–arriving 13 hours by plane a few days before the first day of school–he’s noticed many things that differ from South Korea. Especially in the way the average high school student lives day to day.

[My parents] were really sad, but they are thankful that I’m doing great in America–not having any problems”

“The big difference is, in Korea, we have to learn the standard subjects and fixed ones and every student learns the same, but in Wando we can choose our courses, what we want, ” Kim said. “Maybe it can be just like for the future or something [you’re] interested in. I think that’s really important–a good thing, which is different from Korea.”

Kim was able to choose his courses at Wando, and because he loves math and science, chose to take challenging courses in those subjects. Kim is taking Honors Physics, AP Computer Science Principles and Honor Calculus. Despite the challenge, Kim enjoys the classes very much.

He also takes Honors English II and Honors US History, and though Kim finds them slightly more difficult because they are completely new to him and he is not used to learning US History or English in English, he is looking forward to continuing the classes in order to improve his language skills.

Aside from the courses, the general school day is also significantly shorter in America than in Korea. Approximately 16 hours are dedicated to in school learning as well as required after school study sessions–longer on weekends and vacations.

“There’s a lot of difference. Korea, we have after school called ‘Academy’. So the entire time, including school time, we study for 16 hours every day, even including weekends or vacations,” Kim said. “But in America it is…lesser than Korea. When I finish, I can have more time. I can play or talk with my friends, or whatever–killing time.”

Adjusting to his new way of life was made easier because of his friends and his host family, but he still noticed differences, even in the way people interacted.

As well as the fact that in Korea, age 19 is the age when most activities are made legal. Learning that someone could receive their drivers’ license at age 16 came as a shock to Kim.

“That is really insane, like in the view of Korea, because almost everything is 19,” Kim said. “The alcohol is 19 and driver’s license is 19 and all of that, and in America the alcohol is 21. A higher age than Korea….It was amazing. I was surprised.”

Kim still has many more months in America, but he already sees an impact in the way he views the world.

“My mind changed,” Kim said. “I was just whipping myself because I have to study really hard in Korea, so I had to just do all this hurry. It’s almost like torturing myself…but I think I came here and I have my time, so [I’m] relaxing a little.”

And he already knows that that impact will continue to spread to all aspects of his life. Ten months is a long time, and Kim is looking forward to spending them exploring Charleston and continuing to experience American culture.

“I think, maybe there will be two feelings,” Kim said. “One is: I will miss America because it’s ten months. So it’s a whole year. So I think I’ll do a lot of things in America and keep them in my memories. So I will miss America. And another one is: I get to go back to Korea. So, you know, that home feeling.”

And Kim hopes that his time spent in America will help inspire other students to do the same. Get out into the world and see what other people, cultures and experiences have to offer.

Mundane things the average American might take for granted, but for Kim, they are the things he has come to enjoy the most.