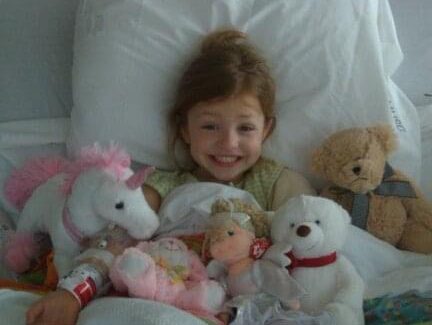 Emory sits in her bed as a young child surrounded by her stuffed animals. (Provided)

Emory sits in her bed as a young child surrounded by her stuffed animals.

A fall to remember

I can’t fully remember what happened after I fell, but the details from before are as vivid as ever.

It was a Saturday, the one day I had off from the grueling work that is kindergarten, and I was sitting on my sister Berkeley’s window sill watching her play her pink Nintendo DS on her bed. I complained that I was hungry and she agreed, so she went to go get some popcorn. When she came back from getting snacks, I was gone, completely disappeared from her room, even with the promise of food coming.

It’s funny to me, looking back, that it could have been a cheesy transition in a 90’s sitcom, the entire first episode would be my family finding me in the closet of a different room after sucking up 30 minutes of people’s day, but that’s not what happened.

I had fallen from my sister’s two story window into my backyard, breaking my arm and lacerating my liver and spleen. It is safe to say a little more than 30 minutes of someone’s day got taken up.

I can remember the ambulance coming to get me off of my couch, and a paramedic telling my dad that it was really stupid to move me from my place in the backyard, just feet away from the swing set I wouldn’t be allowed on for four months.

I woke up to a nurse coming to get me for a CT scan, telling me to sit very still despite that being one of the hardest things for a five year old to do, and getting an IV that the nurse lied to me about, saying it wouldn’t hurt.

I ended up being in the hospital for four days, and almost had to get surgery, but I didn’t care much. I was five and couldn’t understand why I was getting so many cards from people at church, but looking back on it now, ten years later, it is clear that this accident was a much bigger deal than I thought.

I can’t remember much from afterwards, after all I was on a lot of meds (and I was five), but weird little details remain — like the little boy I met in the MUSC playroom finger painting or the two waffles and side of bacon my grandparents brought me from Waffle House when they came to visit.

I can, however, identify the lasting results of the incident on my life. The inability to watch any medical shows without panicking, the sensory processing disorder diagnosis and the many people who remember me specifically because of that incident, all come to mind.

I can remember many other injuries that I have had much more vividly, but none of them have been as severe as my, admittedly very dramatic, fall. The positive side effects can also count for something, now me and my sister have something to make fun of no matter the time of day.

Honestly, the injuries from my fall that affected me the least, but the experience itself was a quintessential part of my childhood.