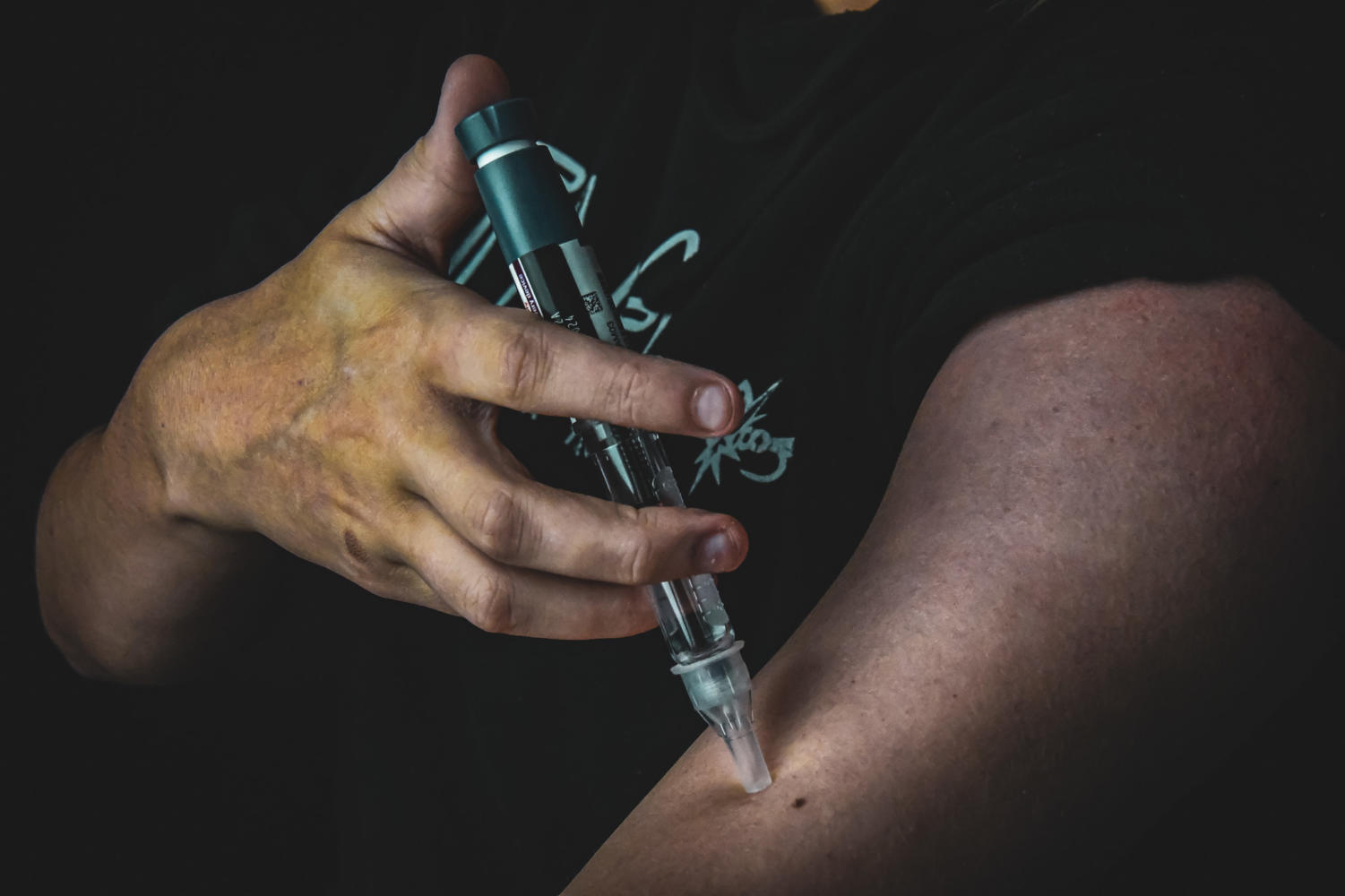 A steep price on survival

Rhonda Douty didn’t think much of when her daughter, Ashton Douty, had only gained a pound in 2018, neither did the pediatrician. They both knew her daughter and knew she never got sick.They both agreed they would both just keep an eye on her.

A couple months later, Douty took her daughter in again to check out a sore throat. She had only lost more weight.

Douty decided to take her to a pediatrician, it was then when Ashton was diagnosed with Type 1 Diabetes.

It was a little over a year after when her other daughter and Ashton’s twin, Ansley Douty, was diagnosed with Type 1 as well.

“You want your kid to be healthy and not have any issues and you find out all of a sudden this healthy kid that’s rarely sick has a chronic illness that they’re gonna have to deal with their whole life,” Douty said.“I was relieved, unhappy, but relieved. It was something that was treatable, but still very heartbroken that our girls have to deal with this on a daily basis.”

After being diagnosed, the Douty’s family lives changed. The daily routine they were used to was now something entirely different. They had to adjust to a new way of living to deal with this illness, from the medicine they took and how to track it.

“They then have to inject themselves with a needle to give themselves insulin, they probably take six or seven shots a day of Basaglar. And then a long lasting insulin so it’s in their system for the 24 hours and just kind of helps regulate the blood sugar.”

Douty has noticed how it has changed their lives, how it messed up the normal rhythm they were so used to and set them apart from others. She feels as if normal teens don’t have to worry about the things they do.

“[Their lives] definitely have changed because they’re constantly on and on alert, so they’re not able to be like normal teenagers in a sense,” Douty said.

“They kind of wanna pretend they don’t have it at times, which is not a great thing… I think it’s just hard for them to, a lot of times it’s like, ‘why me?, why us?’, they don’t really know anybody else with it and it is becoming more common, but, there’s very few kids that we know that have it.”

Normal daily tasks are altered. Almost nothing can be done without planning ahead, without worrying about their bodies constantly.

“Just more than anything, just having to be on at all times. So much prep goes into anything. They don’t get to just walk on a soccer field and play soccer, they have to monitor their numbers. They have to eat the right thing and try not to have the blood sugar too high where their performance is poor,” Douty said.

“Same thing while taking a test. If their blood sugars are super high, you’re not thinking straight, so they can do poorly on assignments. So it really affects every minute of the day,.”

Even though they feel that taking medicine is so difficult and frustrating at times, not taking it is not an option for them.

“If they didn’t have it, they wouldn’t survive basically.  They have to have insulin in order to survive. It’s very important because their pancreas doesn’t work anymore,” Douty said.

While the Douty’s have insurance to help cover a lot of the medicine, Douty can’t imagine what paying for it would be like without the coverage

That being said, the way insurance covers the medicine isn’t always consistent.

“The biggest thing is sometimes the way the doctors write the prescriptions. Recently I had asked if we could get more insulin because we would get down to like the last pin, it’s basically a needle and filled with insulin, and it’s just nerve wracking,” Douty said

“[The doctor]  was nice enough to rewrite the prescription and so now we’re getting twice as much insulin for the same price. I think it’s crazy how insurance companies work because it’s all based on.. the way the prescriptions are written and more so than the amount.”

The insurance can decide to stop covering certain medicines and in response the families, like the Douty’s, must shift from medicine to medicine .

“They just dropped Ashton’s long acting insulin and so we just switched over to Babar because they were no longer covering that insulin. We have had some things where they won’t cover it anymore, but we just have to switch to a different medication,” Douty said

Senior Braden Cook started taking medicine for his ADHD when he was 10 years old, after his parents took him to get tested. He now takes Vyvanse every morning when he wakes up.

“I’ve tried two types of ADHD medicine, Adderall, and Vyvanse.I found that Vyvanse is more helpful to keep me more aware and focused, because without my medicine, I get very sick. Not anxious, but I’m very fidgety, and I can’t stay focused,” Cook said.

Medicine is very important for Cook, despite the fact that his body systems can continue to function without this medication, his day to day life is made easier because of it.

“I feel that I would be able to work around not having ADHD medicine. I feel like I could walk around in school, but I feel like it’d be much more difficult. Especially when I was younger, to not have my medicine because of how much focus I would need doing school,” Cook said.

Cook’s family covers his medicine through insurance and copays, but Cook still feels as if the price on medicine is unfair.

“Knowing about how pharmaceutical companies are jacking up the prices of medicine just for profit and nothing else because of how easily cheap certain medicines can be made and how expensive they’re being shipped out to everyone for,” Cook said. “I feel like it’s a very big problem. And I feel like there are people and companies out there trying to fix it, but I feel like it’s a very slow process.”

Nurse Elizabeth Bumgarner and the other nurses help people finish their school with the medicine and their care.

Bumgarner has students come in daily for prescribed medicine, and she thinks it has become a part of their daily routine by now.

“They know when to come. So it’s programmed into their schedule, and they need it. So it  hasn’t interrupted them. Most of them have been on it for a certain amount of time already. So it’s something that helps them focus better, and get through the day,” Bumgarner said.

Bumgarner thinks sometimes medical costs can be a lot for families, however she thinks there are ways for families to get help, and that the school clinic can take some heat from it.

“I’m sure it is difficult for some families, depending on the seriousness of what the medicine is for. I mean, obviously, health care can be expensive. I’m sure for some of our families, it is difficult, but I think there’s programs out there that social workers could help with if they needed it,” Bumgarner said. “The school system provides those basic over the counter meds that are basically free of charge. So if you need a Tylenol or Ibuprofen or a Tums or cough drops, we can provide those so parents don’t have to worry about the cost of that while they’re in school. The stuff prescribed by a doctor, that’s a different story.”

Bumgarner feels that there might be families that feel scared to seek help because of the medical prices.

“I’m sure there’s families that feel that way. Absolutely. But hopefully there’s programs to help them and somebody is there to help that family recognize that it’s a needed med, we usually don’t come across that we’re not involved in that process. I mean, if we can help in any way we can, we will,” Bumgarner said.

With changes in insurance and medical expenses, AP Micro and Macroeconomics teacher, Tamie Betsill,  feels as the medical expense can affect the spending of households, especially those of lower income.

“In terms of household budgets, if you’re spending the majority of your income on medical care or medication, that’s going to decrease how much you’re able to spend on other goods and services. We know that one of the primary reasons why people file for personal bankruptcy is due to medical issues,” Betsill said.

However, lowering the cost of medicine is a long difficult process that is not as easy as suspected.

“[If cost were to decrease] it would be challenging, and there’s a lot of economists and people in the healthcare profession who’ve considered how to make that happen. That’s something that a lot of people are interested in doing. I just don’t think that there’s a consensus on a way for everyone to agree on how to make that work,” Betsill said

If the medical cost were lowered, Betsill thinks it would be a lot easier for people to access help as well as try to find it

“If it were to decrease, then what I said before, would kind of be the opposite to where households would have more income. they probably wouldn’t be as stressed, paying for medical care,” Betsill said.  “Some people don’t seek medical care because they can’t afford it. So we don’t want people doing that. If you were to lower the price of it, then more people would probably seek out medical care and catch health issues before they got too bad.”