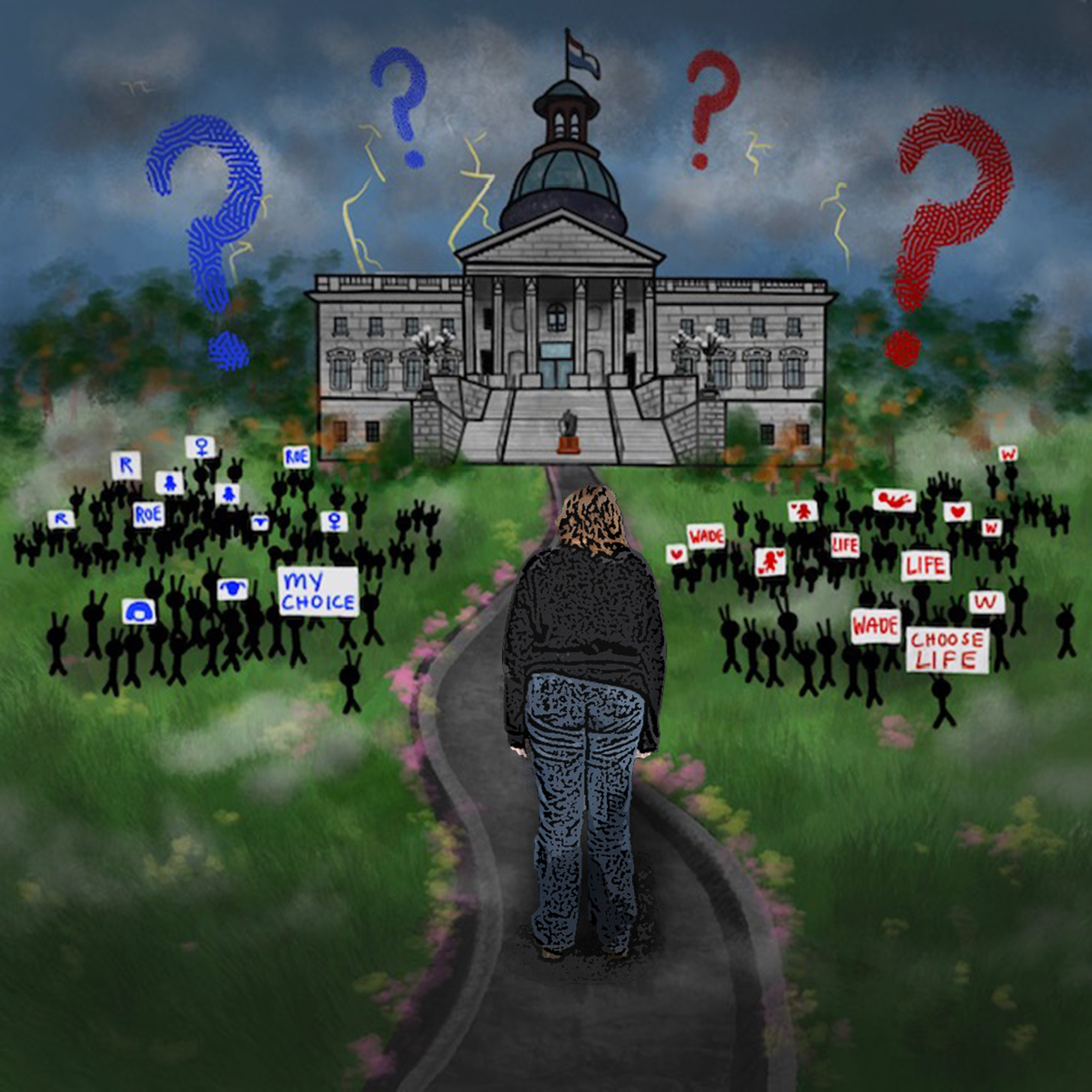 Natalie Gregory told her children that she may have to go to jail to protect her patients.

Gregory, an OB-GYN doctor in Mount Pleasant, said she may have to make this difficult decision after the overturning of Roe v. Wade and the proposed legislation in South Carolina that could potentially ban abortions in the future.

Pro-choice versus Pro-life. An ongoing universal argument, has once again been rekindled in 2022, dividing America into two sides.

In June, the U.S. Supreme Court overturned the 1973 case of Roe vs Wade, eliminated federal abortion protections and left the decision up to individual state governments. Since then, several states have pushed to restrict access to abortions, including efforts to introduce a complete ban in South Carolina.

Jared Tyler, an AP U.S. Government teacher, teaches the principles of the Constitution, which are the basis of both sides of the arguments.

“One of the things you have to do from the perspective we are looking at is to try your best to deforce the emotional side of it from the legal side of it, and that’s very difficult,” Tyler said.

Since the overturning of Roe v. Wade, the long-contested issue has once again moved to the forefront of debate in the U.S. Since then, thousands of protests have been held across the U.S. as both men and women fight for what they each believe in.

“I personally have had a lot of patients come in voicing concerns about their current contraception methods, and people not on a reliable form of birth control coming in to get on one,” Gregory said. “I’ve seen quite a few people come in requesting permanent sterilization, and a lot of men have gone and gotten vasectomies as well.”

Citizens have begun taking matters into their own hands, by making decisions in order to avoid any unwanted pregnancies that could cause unwanted physical, mental, or financial implications on the parents, according to Gregory. Some are so desperate they spend thousands of dollars in order to prevent future predicaments they may find themselves in.

“I think it is a very desperate place to be, but women are going to harm their selves to try and have an abortion, and that desperate people will do desperate things, and I think we will definitely see suicide rates go up,” Gregory said.

Roe v Wade originated in Texas and was brought to the federal courts in 1973. This case ruled that the right to decide whether or not to continue a pregnancy is included in the right of liberty in the Constitution, a right that protects one’s personal privacy.

“When we look at Roe v. Wade the two big things that the arguments are based on are the 14th Amendment and the Ninth Amendment,” Tyler said.

The 14th Amendment was ratified immediately following the Civil War, and establishes due process and equal protection under the law for all citizens. It instates that all free citizens have the same protections regardless of their former status, as it pertained to former slaves who had now been freed by the 13th amendment. The idea of equal protection for individuals on both federal and state levels under the 14th amendment led to cases of the right to privacy in the 1960s and 70s under this amendment. However, as the word “privacy” is not specifically stated in the amendment, it has resulted in another feud regarding how strictly the Constitution is supposed to be interpreted.

However, Tyler said, it could be argued that the Ninth Amendment takes back that argument by stating that just because a right is not enumerated in the Constitution, does not mean that individuals do not have that right. Therefore the argument of the 14th Amendment not covering the right to privacy is refuted as the Ninth Amendment claims that the word “privacy” does not need to be stated for that right to be given.

Several South Carolina politicians have already taken measures to work toward a complete abortion ban, but a complete ban bill failed in the state senate after Republican Sen. Tom Davis threatened to filibuster the legislation. Had the bill passed, it would have outlawed abortions with no exceptions for rape or incest 12 weeks after conception. Previously, the state had passed a “fetal heartbeat” bill that banned abortions after six weeks. The S.C. Supreme Court blocked the bill in August but the bill has since gone into effect.

Kansas voters decided recently to reject a state constitutional amendment that would have banned abortions, a surprising decision for a typically conservative state.

“We’ve had to spend hours and hours on the phone with lawyers and meanwhile delaying the care for the woman who is in tears learning that she’s just lost a desired pregnancy,” Gregory said.

Because of these bills, doctors and physicians are afraid to put their jobs on the line, Gregory said. In case of an infraction with the law, it would be the physician putting his or her career on the line, ruining his or her medical license, and going to jail as a result.

“It really sucks to live in a state where I can’t reassure you because I don’t know what they’re going to do tomorrow,” Gregory said. “I told my kids that mommy may have to go to jail to take care of her patients.”

One of the biggest arguments under this debate stems down to religion and personal belief systems.

“I know they’re all very different value systems in this country and all different faiths in this country, and while Christianity is definitely the overwhelming faith represented with our elected officials I think it’s inappropriate for us to have a Christianity-based law that applies to everyone regardless of whether or not it’s their faith system,” Gregory said. “That is my personal faith system, and I don’t have a problem reconciling those things because I believe that I’m charged to help each woman that’s in front of me in the best way that I know how, but I don’t personally have a feeling that I’m doing anything morally or ethically wrong because what I’m doing is giving patients autonomy.”

Jacob Pelbath, a senior and a member of the Fellowship of Christian Athletes, maintains a pro-life view due to his religious beliefs.

Pelbath, however, said he doesn’t believe in a complete ban as previously proposed in the South Carolina legislature.

Pelbath said he doesn’t believe in imposing his religious beliefs on others but instead says the decision comes down to the rights of the fetus.

“I don’t think its fair necessarily, but I think it’s right to have those laws because my beliefs say it’s murder,” Pelbath said. “What we need to do as pro-lifers is be more sympathetic to people who are pro-choice because we have to be able to put ourselves in their shoes, like ‘hey, they don’t have the same beliefs as us and they do have to carry this burden of having a child’, so do I think it’s fair? No, but I think it’s right and it’s justified because it’s murder in terms of my belief.”

About 25 percent of American women will have an abortion in their life time, all for varying reasons, whether it be financial, social, family issues, health problems, or it was just an accidental unwanted pregnancy, according to the Guttmacher Institute, a reproductive health research group that supports abortion rights.

“[The legislature] is trying to mandate what women do, and how they make this decisions without fully understanding what each person’s background and moral and ethical beliefs or what their faith is, what their family situation, or social situation is,” Gregory said.“Quite frankly to me it makes not one bit of difference if you’re terminating a pregnancy because you have breast cancer and you need to start your chemotherapy, or if your baby is expected to die, or if you just had a condom break and found yourself pregnant your senior year of high school and you had other plans that did not involve stopping your education to raise a baby. To me your decision, and your ability as a human being to make your own decisions and have bodily autonomy, that’s a decision that only you can make.”

With many states already implementing or taking steps to institute stricter abortion legislation and further splitting Americans over their opinions on the issue, Pelbath said both parties need to find common ground going forward.

“We are ostracizing ourselves from each argument, instead of trying to work together as a nation, try to work together as people, and as communities, and as families to make this scenario easier because this isn’t an easy topic to tackle,” Pelbath said. “If we want to be the United States of America, then how are we supposed to do that if we are tearing each other’s throats apart over this?”