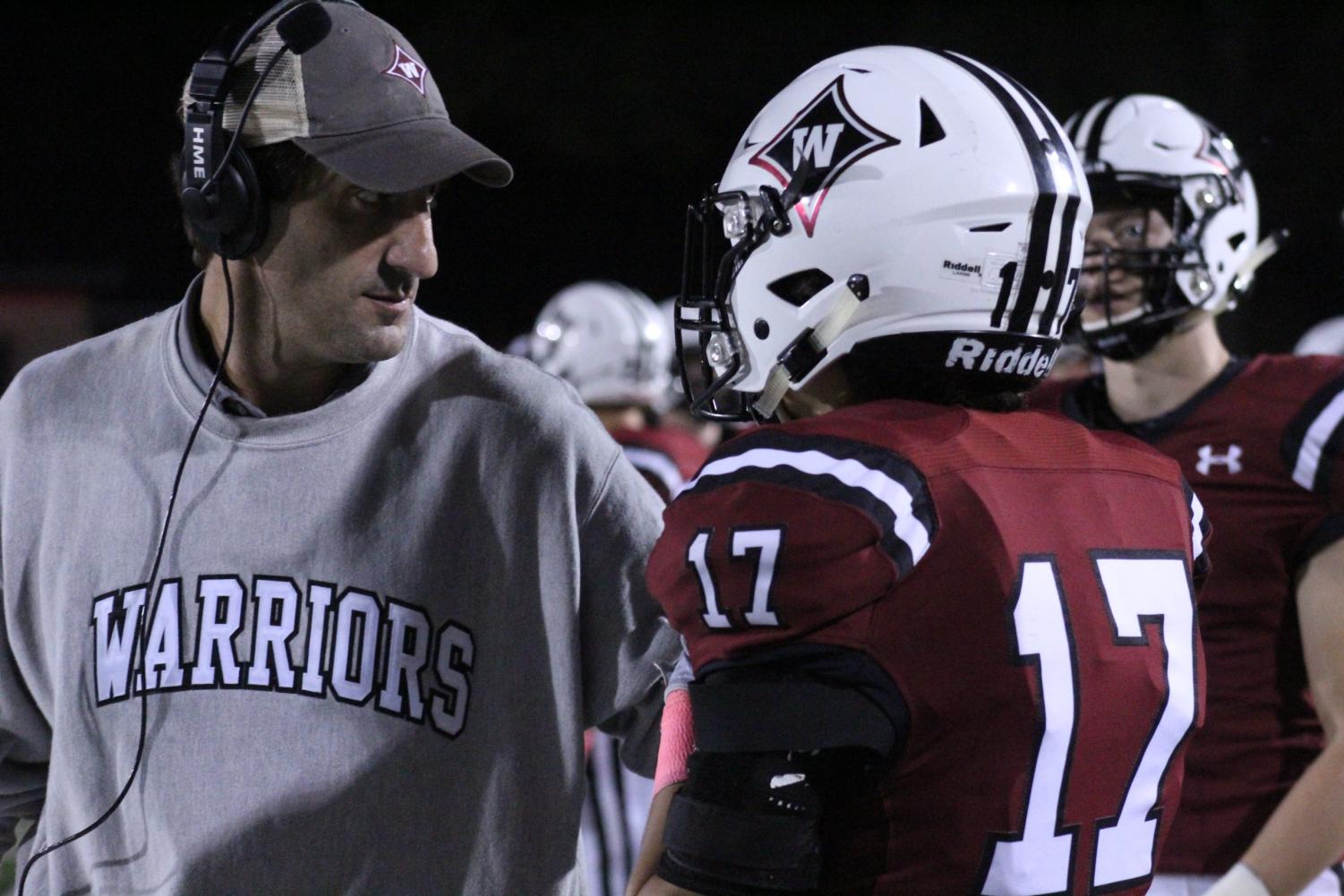 As football is a way of life for many around Wando’s campus, what many are not used to is the changing of the guard. After a very unexpected resignation by previous head football coach, Jimmy Noonan, Wando was left with a big hole to fill at the head coach position.
The man to fill that role is newly appointed Wando head football coach, Rocco Adrian, who has had lots of time in different football environments.

“I started coaching in 1999, at Christ Church Apiscabal Church…” Coach Adrian said.
“I coached college football for a couple of years: three at Furman…, North Greenwood for a year, and coached a couple of years at Gardner Webb and then got here at Wando.”

Coach Adrian looks to use his extensive knowledge as a football coach and will use it to develop the football players at Wando.

“We have to make sure we have fun and at the same time we are teaching the values that we want young men to learn,” he said in a telephone interview.

For Coach Adrian, football was instilled into his life at a very early age.

“My dad was a college football coach for 40 years, so I spent a lot of time either Saturdays or Friday nights on a football field,” Coach Adrian said.

With several years of experience in the football atmosphere, Coach Adrian looks to lead the Warriors’ football team in a new path. He believes football to be a family atmosphere and that your family is a big part of being able to coach.

“If you’re married you have to have a great wife and I’m fortunate enough that I do because there is a lot that is thrown on them because of how much time you spend on them doing football or away from home,” Coach Adrian said. “You always want to make football a family atmosphere.”

Even with the recurring problems of the COVID-19 pandemic, Coach Adrian is ready to start training for next year’s football season as soon as possible.

Before Wando, I worked at a rental company called EventWorks, where they did all the tents, weddings, all that kind of stuff. Corporate events for Boeing and stuff like that. We rented all the chairs, tables, dishes, all that kind of stuff. I did that for a few years. Prior to that I coached college football at Gardner Webb University, North Greenville University, and Furman University. Prior to that I taught elementary school PE and coached football and was the head wrestling coach.

What hobbies do you have outside of your occupation?

What’s the most intense memory that you have?

The death of my brother is the most intense memory I have. Like in a bad way. Birth of my children, in a happy way. When my children come out, like you won’t understand until you’re a parent and that sounds so terrible, but once you see your child for the first time and know that life has changed and you could never love anything more than that. At least that was my experience, and I think that’s what a lot of parents experience.

Watching the life leave my brother from cancer was probably one of the hardest things I’ve ever done in my life. When you see your little brother take his last breath, it will change you. I’m different now after that happened than what I was before. I was a lot more intense and for lack of a better term, edgier. Just trying to make your way in the world and all that other stuff, but now I’m a little more laid back, and I don’t take things as serious, which I think is a better way.

What’s your family like? What’s one of your favorite moments with them?

I have a good family. My dad coached college football for a bunch of years. I spent life kinda growing up on the sidelines, and doing that kind of stuff. My mom was a nurse. She was loving. They were fantastic. They were strict, but in a really good way. I’m still very close to both of them right now, and I’m trying to run my immediate family like that now. We’re strict but not strict. We’re just trying to do it in the right way. Just trying to have a lot of fun.

If you could describe your childhood in three moments, what would you say?

Very little, like before third grade, my memories were mostly of being on the sidelines holding my dad’s cord to his headset for the University of Rhode Island football games. Most of my memories of that time were centered around those kinds of things. I remember being in Maine for the University of Rhode Island versus Maine and the six overtime game and we’re running around, but it was like I could still remember that. I remember the bus rides with the team.

As I get into middle school, my memories were a lot of enjoying small town life. There wasn’t a whole lot to do around there, but I really liked how the community was. I really liked just the feel of everything. You know you knew everybody and everybody knew you and sometimes that was good but sometimes it was bad. When we moved in the middle of high school that sucked. I hated that. I still to this day hate Florida and have no desire to go back other than to see my parents.

And then my experience at Furman was a lot of fun and I loved that. The chance to play college football and do that experience was cool. And after that it’s really just been my family getting to meet my wife and being married to her for 13 years and our two just awesome little girls. Really my memories just center around that and what I do teaching wise and coaching wise. The ability to help others the best I can.

If you could reconnect with one person from your childhood, who would you choose to see again? Why?

I think I’d like to see the crew, or the gang I should put it from Danville. We had cool cliques in the sense that the kind of group of friends that we all played sports with. We all played basketball together. We all played football together. We all did that kind of stuff. There was also a group of girls that were like with us too in that same sense. We were just all really good friends and it made just one kind of big clique from all different walks of life. It would be neat to go back and maybe reconnect with some of those people that I don’t really speak to anymore. Just to say hello.

When I was little we lived in Pennsylvania, and we had a golden retriever. I love golden retrievers. He was named Blitz. And I remember we went to this golf course and hole number nine was a giant hill. That’s where we would sled ride whenever it snowed, and we would take him out and we would ride the inner tubes down and he would just run across and literally demolish us. Like paws out and chest out. A perfect form football tackle and just wreck us going down those hills. I remember he hit my dad one time and my dad went flying. I mean face was cut up. All that kind of stuff, and he just laughed like he couldn’t believe it.