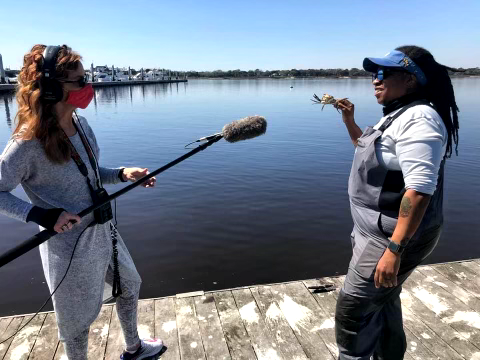 Victoria Hansen interviewing a local crabber Tia Clark for a story that aired nationally on NPR.

Whether it be printed in a paper, broadcasted on TV, or spoken through the radio, news is an essential part of a democratic society.

Women’s role in media has increased drastically in the past fifty year, becoming an important part in both broadcast media and print media.

Victoria Hansen is a  reporter and a Lowcountry Connection for the South Carolina Public Radio. She has been in broadcast journalism for over twenty years and has not only been awarded several Emmys, but a Community Service award from the South Carolina Broadcaster’s association. She has worked as a journalist for a newspaper, a TV anchor and currently as a Radio reporter.

Journalism has been in her blood since a young age. Hansen’s father served as a combat photographer in Vietnam during the Vietnamese war and then later worked in the local paper in Gainesville, Florida.

“There was lots of days where they didn’t have daycare so I would’ve had to go to work with one of them. So I went to work with my dad,” Hansen said.

“I grew up smelling ink of newspapers and [hearing] guys on typewriters-it was mostly guys back then- smoking cigarettes and cigars and cursing and saying things that  you know that an eight-year-old didn’t need to be around but I loved it,” Hansen said.

Deeply impacted by her youth, Hansen’s love for journalism grew. At nineteen, Hansen got a job in a Philadelphia paper writing obituaries.

“I literally called funeral homes everyday and asked ‘Hey, anything going on?’ It was horrible but it was just your basic, basic, basic information. If you couldn’t get the basics of that right, how could anyone else trust anything that’s in the paper. So, everybody was just scrutinized there,” Hansen said.

While obituaries might not have been Hansen’s life commitment, her experience there just continued to grow her interest.

Later, Hansen would become a TV Anchor in Nashville for several years. The biggest issue she faced there was not about her as a reporter though, it was about her appearance and her gender.

“[It] was brutal for women. I just kind of disappeared from the air and my [male] co-anchor who I love dearly got to retire. The women, especially on TV, we kinda  just disappeared… and they didn’t give  us a real reason,” Hansen said.

“I think age discrimination is the biggest thing women face  and this business somehow,we have a shelf life. And I’m a better reporter now than I ever was when I was more attractive,” Hansen said.

Hansen admits that being a woman has added struggles to all her experiences.

“TV, it was all men and most of my bosses are still men. I have female bosses coaching the TV station at Charleston but they are still ruled by men and are still carrying out men’s orders. So we gotta look out for each other. We got to work with each other. And have each other’s backs,” Hansen said.

Hansen has never seen her gender as something to negatively affect her reporting though, instead she thinks it adds to it instead.

After leaving the world of TV broadcasting behind, Hansen moved to Charleston, and  quickly fell in love with Radio reporting.

Over the years with the South Carolina Public Radio, Hansen has covered a wide berth of stories in the lowcountry. More than anything, stories about social justice fascinated her. Especially after the protest of George Floyd’s death in 2022, Hansen has reported many stories on black history and the Black Lives Matter movement.

“I like telling stories that educate people about black history and there is so much of it in the lowcountry, I mean it’s everywhere. And so that’s one of my favorite topics,” Hansen said.

To Hansen, her proudest moments as a reporter are  when she impacts people’s lives. As a radio reporter, she was able to help a man whom she did a story about that had Breast Cancer but could not afford health care. Unable  to wait for legislation to pass, Hansen and others helped the man find a loophole in the legislation instead.

“That’s like a profound way that journalism can change things. When you’re able to shape it,” Hansen said.

The few years she’s lived here, Victoria Hansen has made a huge impact on the Lowcountry and different communities in Charleston. She strongly believes in the power of journalism and stresses the importance of news.

“Information is powerful and you can get information from telling people stories, and I think shared experience. Journalism is a great way to share experiences and share what we are all going through and make connections,” Hansen said

Wando student Brooke Voakes also has a passion for broadcasting journalism. She is a part of the East Cooper Student News crew, which is a news broadcast for both Lucy Beckham and Wando.

Her passion didn’t start in high school though,

Voakes discovered in those years what she loves so much about broadcasting.

“I found that I really loved it. I loved being in front of the camera and I also loved the technical side of it such as editing and just making it more personal and just being able to be super creative, but also my personality being expressed as being an anchor and an on camera presence”

Her sophomore year, Voakes decided to continue to pursue her interest by joining what was at the time, Tribe Talk and now is East Cooper Student News. There, she learned more about the skills and details needed for Broadcast news.

“There’s just so many different intricate details that go into every production that I did not know in middle school and years prior so learning those different details and this is how much that goes into a news show was something that I didn’t really expect and that I’ve learned over the years.” Voakes said

The ECSN has experienced many changes over the past few years. From shifting to different teachers, and shifting from covering one school to two schools. However, Voakes thinks they are doing better than ever.

“I just love how we’ve progressed over the years. I’ve been a part of the news since sophomore year and we’ve been through a lot of challenges.” Voakes said

I just love how we’ve progressed over the years. I’ve been a part of the news since sophomore year and we’ve been through a lot of challenges.”

Voakes especially enjoys allowing her creativity to flow into her work and help create the news.

“I think that my favorite part of it  is getting to use your creative side and make differences that overall are going to impact the whole production as a whole and what students watch every two weeks.” Voakes said.

News is an important part to people of all ages and backgrounds. No matter how big or small, local or not, news can impact anybody’s life.