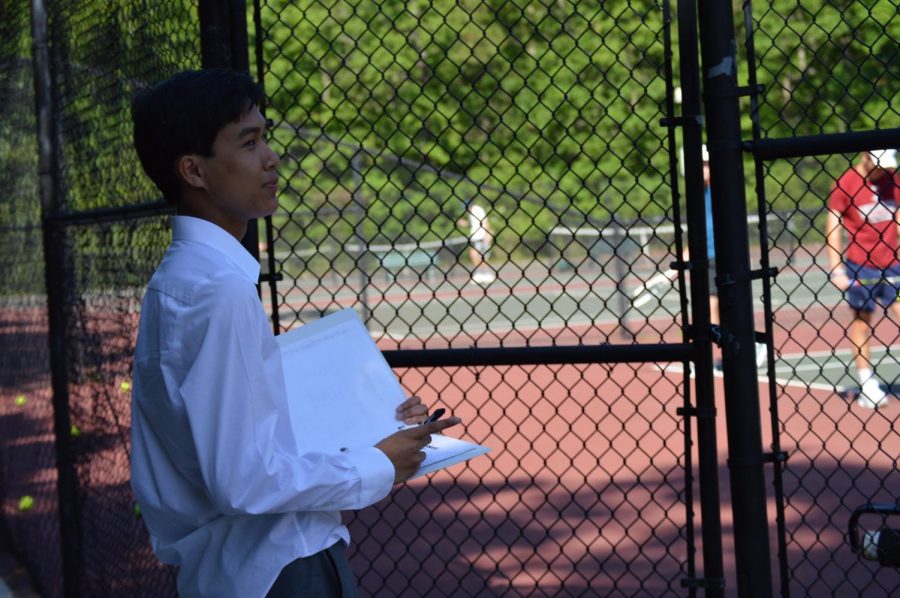 Andrew Nguyen watches over the tennis team as they perform.

Whether they’re a boys tennis team or girls volleyball — it doesn’t matter. Andrew Nguyen is there. Sitting. Watching. Feeling his indescribable Wando pride and appreciating the players and their sport.

He used to be one of those players — on the tennis court. But when he developed a pain in his hamstring that was connected to a slipped disc in his back, he could no longer play.

“It’s the first sport I kind of took seriously and started playing a lot,” Nguyen said. “And I guess… the team my freshman year was a big deal to me because I felt accomplished. I just didn’t want to let go of it too soon.”

The next year when his friends were scrimaging, he was there on the sidelines writing score reports and managing.

Other than involving himself with Wando sports, Nguyen divides his time between Ping Pong Club, honors societies and acting as Senior Class President — a job that entails many responsibilities.

“Being senior class president makes me responsible for communication with the class,” he said. “Whether it be school events, graduation updates, schedule changes etc… and frequently posting on my social media.”

Despite practically living at school by involving himself in leadership positions, it is the source of his happiness which he contagiously spreads to others.

“Showing up to school every day with a smile on my face and being genuinely excited about games and events that are going on at school are good ways to get people excited,” he said.

In the next chapter of his life, Nguyen plans on going to the University of South Carolina to study medicine in order to become a pharmacist — a profession fitting for someone who enjoys meeting and helping people.