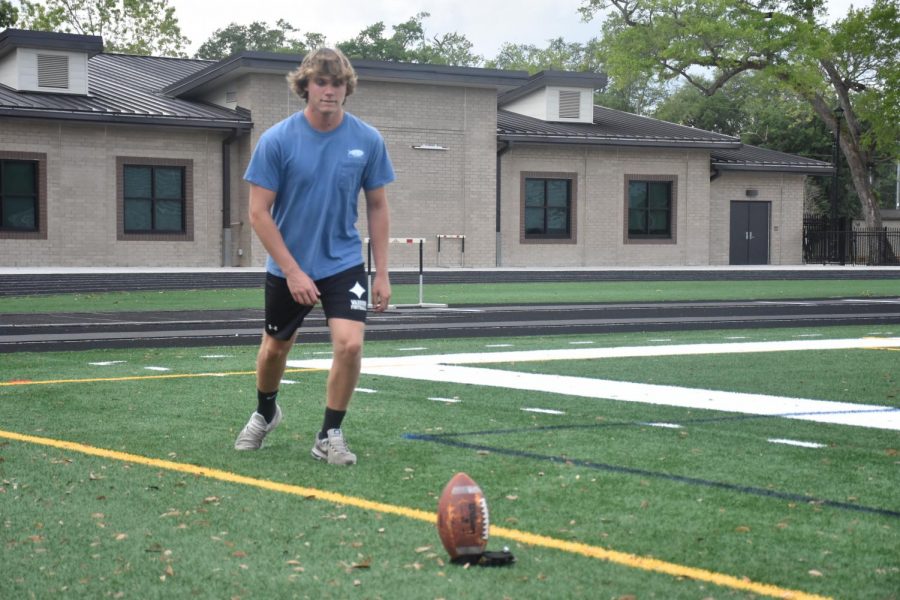 Andre Weil prepares to kick a football through the uprights of a field goal.

He looks down into the black leather on his feet. They have given him so much, given the Warriors 161 career points. And he notices the big tear that runs from his toe to the middle of his cleats. Andrew Weil decides that there is only one thing to do for his team.

In triple overtime, he yanks on his coach’s cleats, two sizes too small. And of course, he kicks a field goal to keep his boys in the game. They beat Summerville later that night after two more overtime periods.

Two years after his game-winning field goal, Weil has committed to N.C. State as a preferred walk-on — meaning he has a guaranteed spot on the team, without a scholarship. He has played football since he was in middle school.

“[Taking a winning kick] is scary. You don’t know if you’re going to make it or not, but you have to have the mindset that you will,” Weil said. “So when you do make it, it’s great… I’m not someone to brag about it. You just stay humble, but it’s great to feel inside. To know I helped the team out.”

Weil said football has not only kept him out of trouble but also kept him in shape.

“Football has taught me to be more responsible than I am, having to be somewhere on time. So when I get to college, I’ll be able to get their on time,” Weil said. “[in life and football] if you are responsible you’re going to be great, and if you’re not you’re not.”

Ecstatic to get on the field and experience the environment at N.C. State, Weil said he is ready to be in front of all those fans. Not only was football Weil’s favorite part of being at school, he made lots of friends throughout the program.

“Knowing that NC State is a great school and I’m going to get a great education. If I do make it to a higher level of football that’s great, but if I don’t I have that school and knowledge,” Weil said.

He was quick to praise all of his coaches.

“[The coaches motivate us] by being loud. Coach [Jamel] Smith gets everybody hyped up. Coach [Jimmy] Noonan has a pregame speech that gets us all hyped up,” Weil said. “Some people might see it as ‘oh they’re mean’, but they are just trying to keep you on track.”