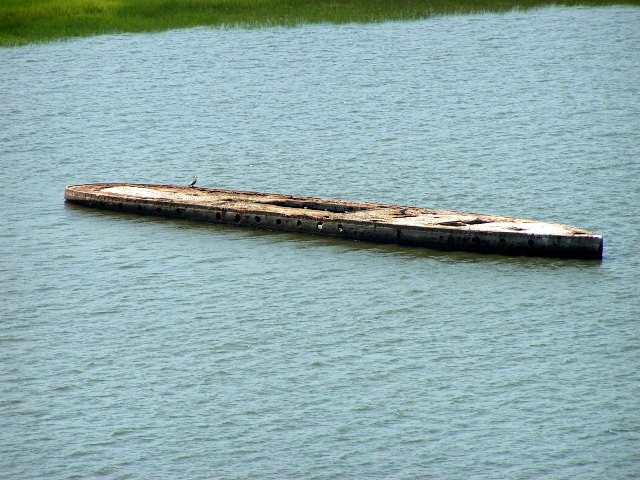 The old sunken hull as seen from the Ravenel Bridge. (Provided by Mount Pleasant historical society)

The old sunken hull as seen from the Ravenel Bridge.

A lonely platform floats in the Charleston Harbor beneath the Ravenel Bridge. Cars drive over it everyday. Runners notice it when they’re crossing the bridge. Boats big and small constantly fly past it. But no one really knows that this “platform” is actually the Old Sunken Hull.

“I would say not many people do know about it [the Old Sunken Hull]. We put up an Instagram post about it maybe like a couple months ago, and we got a post back that said, ‘You know I run by this everyday and I was always wondering what it was. Thanks for putting something up about it,’ said Kate Dolan, Mount Pleasant’s town planner.  “I would say that most people figure it’s just something out there in the water and don’t even know it’s history.”

According to Dolan, the Old Sunken Hull was originally commissioned in 1919 as one of the only concrete passenger vessels made in the country. It was roughly 130 feet long and could carry up to 500 people. In the early 1900s, it was known as the Army Quartermaster River Steamer Col. J.E. Sawyer, commonly referred to as Sawyer.

When Sawyer was decommissioned, it eventually sank in 1926 in Adger’s Wharf. This created problems for all of the shipping ports in the area, and Sawyer was soon nicknamed the “Old Sunken Hull.”

After six years, on June 22, 1929, the Old Sunken Hull was removed from the wharf and towed to the Charleston Harbor where it still resides today.

“[The Old Sunken Hull is] just really being a presence showing the military here. Mount Pleasant did see some military action, you know in Civil War, Revolutionary War all that, and so we could really see that as a physical thing, a physical reminder of the past,” Dolan said.