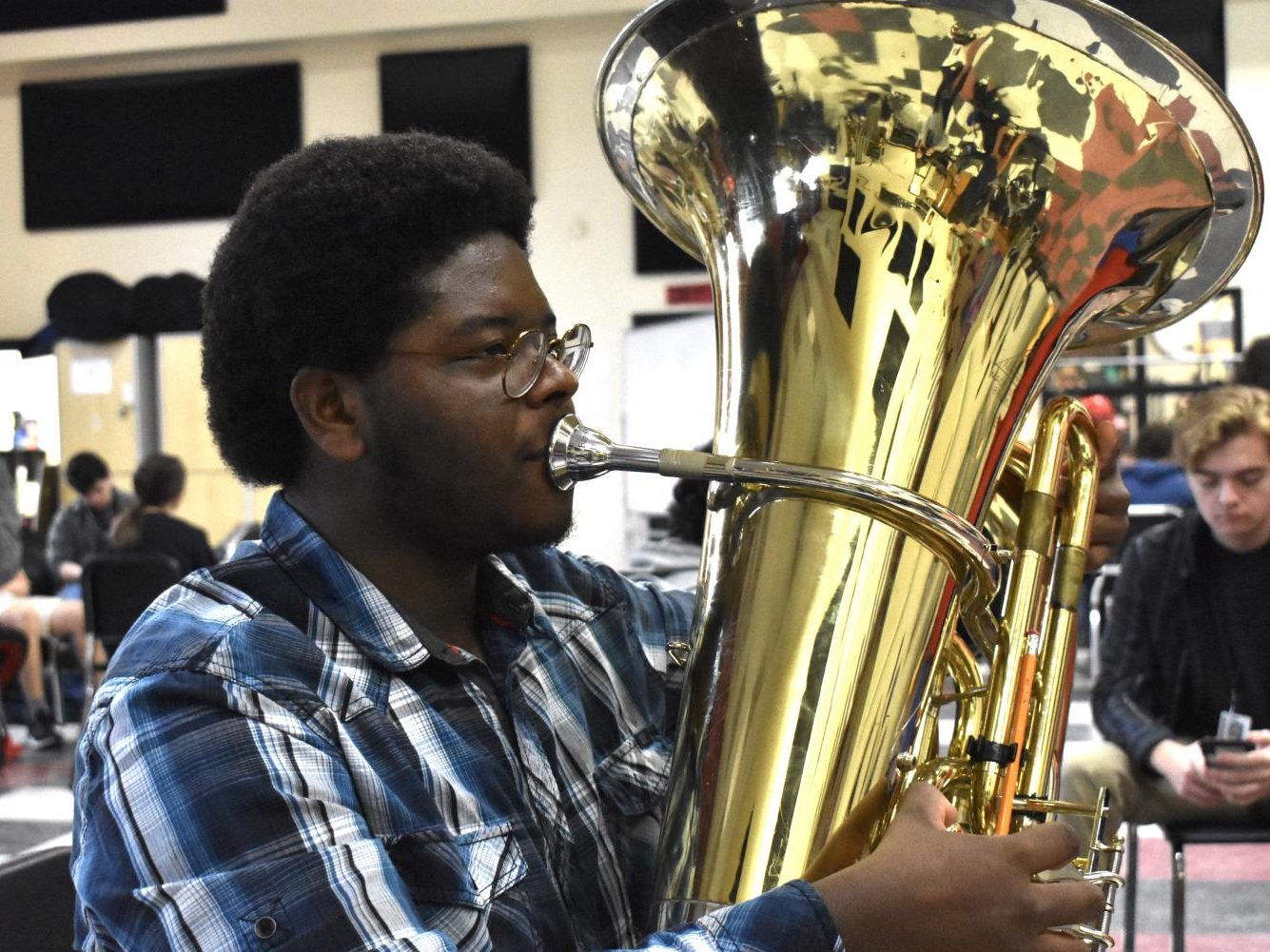 Edward Smalls plays both the tuba and the bass for the Wando Band. He has been playing for 7 years and practices about 7 hours a week. On the tuba, his favorite song to play is “Sweet Veronica” and on the bass he loves to play “The Chicken” by Jaco Pastorius. (Hannah Flint)

Edward Smalls plays both the tuba and the bass for the Wando Band. He has been playing for 7 years and practices about 7 hours a week. On the tuba, his favorite song to play is “Sweet Veronica” and on the bass he loves to play “The Chicken” by Jaco Pastorius.

Artist Spotlight is a story that features a talented artist, musician or creator around each month. This time, we highlight senior Edward “Alex” Smalls, who has become well known for his expertise in playing the bass, the bass guitar and the tuba. His inspiration behind all these instruments is quite interesting.

“A lot of gospel music got me into liking really upbeat music. A lot of more jazzy music,” he said.

He first got started with the bass.

Then in the sixth grade, Smalls got interested in the band.

“I was introduced to band music. I’m like, ‘Yeah, I’ll mess with it. I’ll go do it.’ So, I go in, I’m like, ‘You know what? What are the three instruments that I want to play?’ My first choice was percussion, my second choice was trombone and my third choice was trumpet? I think? So, we started doing the little playing test for percussion. He’s like, ‘Do this beat,’” said Smalls, proceeding to do a percussion beat. “I’m like, ‘All right, all right.’”

Smalls performs a faster percussion beat. “I was trying to impress her, in my mental state, and so we do a couple more exercises. We get back. ‘Edward, uh, on the little 16-note thing? Yeah, you did 32nd-notes.’ I’m like, ‘But did I look cool?’ So then we went to the trombone testing. I’m like, ‘BRRR,’ did all that. She’s like, “You have a very nice sound. Let’s try euphonium.’ Do that again. ‘You sound a bit better. Now let’s try tuba.’ Get on that. Boom, done for,” he said. “I was amazing on that thing, even though I sounded like garbage, I sounded amazing. So that’s what really got me into playing instruments like that.”

While he became immersed in the music in middle school, he actually started a little earlier. “My church had a piano and an organ, and I played on it sometimes. I wasn’t supposed to play one  the organ, but I did,” he said.

He also considers his talent to be his passion. “It was like, you know how you first doing something, and you’re like, ‘It’s cool.’ But overtime you start to get better at it, you start to find more reasons to enjoy it, and bringing stuff into it,” Smalls said. “That’s what happened to me. It just started snowballing down into a passion of mine, and I just wanted to keep doing it.”

It’s also something he wants to major/pursue later in life. “I’m going to major in Tuba Performance and Jazz/Bass Performance, a double major for it,” he said.

Smalls got inspiration for his love of playing these instruments from two things: his mom, and the movie Drumline.

“My mom, when I was still in her womb, she would just play, like classical music, all the time. So I was just there, just vibing,” Smalls said. “But you know the movie Drumline? I don’t know why, but when I was a small child I loved that movie. If it came on, and you were just flipping through the channels, I was like, ‘N-N-N-No, we’re stopping right here, and we’re gonna watch this till the end.’ no matter where it was, it could be 10 minutes, or at the beginning of the movie, I was gonna watch it till the end.”

Smalls also has a large list of favorite artists he enjoys listening to.

“My favorite artists right now is Anderson .Paak, Kendrick Lamar, I like Aretha Franklin — she a queen. I just have a bunch of music I like to listen to,” Smalls said. “Also, Jacob Collier, that guy, that’s peak jazz right there.”