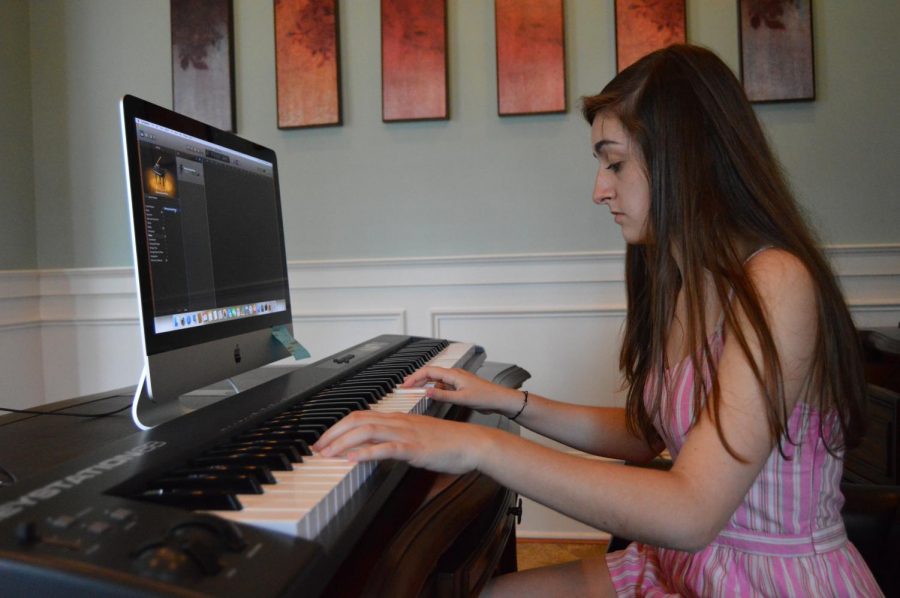 Ashley Stewart expresses her passion for music on the piano.

From her steady hand, a perfectly sharpened pencil glides smoothly across a blank piece of staff paper. Passion flows steadily from her brain and onto the page, forming a whole new creation in the form of a song.

Ashley Stewart is an avid music lover with a passionate drive to create music of her own. With a talent for musical composition, Stewart´s love for music stems from her childhood.

¨I’ve just always liked to sing. At my preschool I was voted most likely to be a singer, but I´ve always just loved listening to music, singing music, and musicals,¨ she said.

Although music has always been a part of her life, it was only last year that Stewart discovered her interest in composition.

¨Originally I wanted to be a chorus teacher for high school or college…but then I took AP music theory and we had to do this composition project and I was like wow, this is really cool,” she said. “I think I’m just amazed that something so simple can sound so cool.¨

According to Stewart, the process of writing a song is long but worth the pride she feels by hearing her original creation come to life.

¨It takes time just because you have to know the theory…you get better as you learn, you learn what works and you learn what doesn´t work,¨ she said. ¨I’ve written a four-part choral piece, I did my composition project, which is a four part orchestral piece, and then I’ve written a lot of two hand piano pieces… Right now I’m writing a mock up for the silent film Phantom of the Opera and Im scoring scenes of that right now.¨

With her passion showing no signs of slowing, Stewart has big plans for her musical future.

¨I was talking to Mrs. [Elizabeth] Keene [chorus teacher] about how there are no female composers and I was like, it would be awesome to be the first female Bach,” she said. “But ever since then I’ve actually been more into the next female John Williams, I´ve been thinking about film scoring.¨

Stewart wants to thank those who have influenced her on the start of her musical journey.

¨I wanna thank Mr. [Derek] Deakins because he’s the real OG out here, he teaches us some music theory and he really introduced me to composition…and obviously [Eric] Wilks, Keene and [Matt] Taylor for helping me grow musically in general…and then my piano teacher because he’s incredible,¨ she said.

Stewart is going to be a music composition major at the University of South Carolina next fall.