Aspiring actors reach for the stars 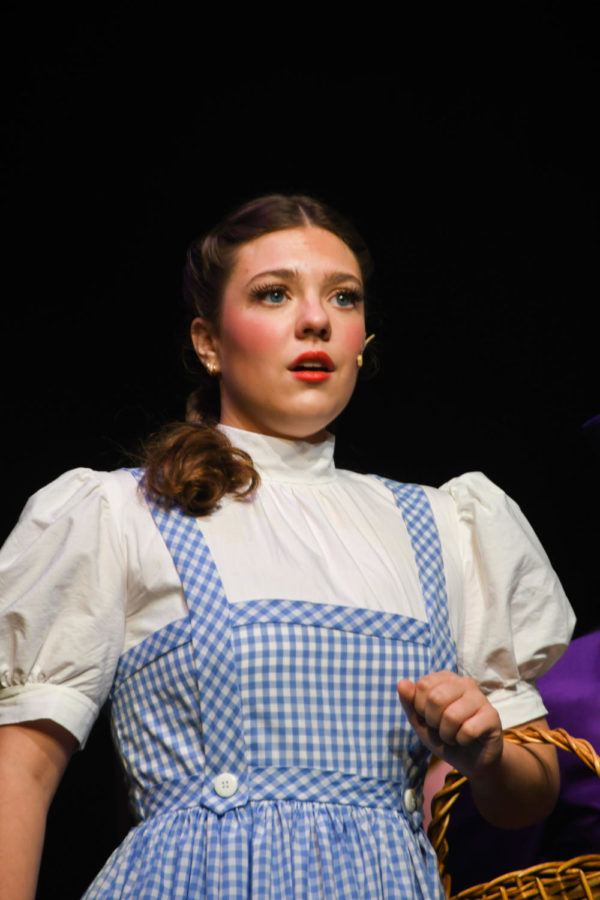 Ella Martin, playing the roll of Dorothy from the Wizard of Oz. When asked “How do you feel when your on stage with lots of people? Ella answers, “I just feel excited and greatful because I get to do what I love and share it with others. As far as nerves go, I’ve been on stage pretty much my whole life so every preformance just gets a bit easier!”

Curtains open. Spotlights on. All eyes on the performer. The crowd anticipating the first line of the show to be spoken. Main character steps on stage, and the show has now begun.

Theater, for senior Ella Martin, is an escape from reality. The chance to play the part of an unfamiliar character brings all kinds of joy to her.

“I had a huge imagination as a kid and I think I just wanted to explore that even more and pretend to do things that I couldn’t do in real life and be something and somebody else just for the fun of it,” Martin said.

For many students this passion starts at a very young age. For Martin, her love for performing started at the age of 7.

“I work with the Queen Street Playhouse and I started working with them about six years ago when I first moved here to South Carolina … [My] old company was called Theaterpalooza and I worked there for probably five or six years when I was younger before I moved,” Martin said.

Similar to Martin, senior Izzy Swyt, also started performing very young. She grew up admiring her Grandmother, who also had a passion for performing

“I was in my first show when I was 7 years old,” Swyt said. “I’ve always been a very talkative person and … my grandmother was a Rockette and I have watched videos of her when I was little and I think that’s really what sparked my interest in performing and she flies in for all of my shows and she’s one of my biggest fans.”

During rehearsal days, cast members spend a great deal of time together. For Martin, she was able to meet some of her closest friends in theater and the cast became a second family to her.

Career wise, acting has always been something Martin has wanted to do. Junior, George Minister, strives to do the same.

“It’s something that I really want to do, ” Minister said. “[Theater has] given me a lot more confidence in my day to day life and in school …  it’s easier to communicate with people and I’m not as nervous.”

Martin explains that one of her favorite parts of performing is being able to connect to the audiences and the effects she hopes to have on people.

“Whatever struggles my character is going through, I’m sure someone in the audience is feeling that and they could take away some joy from that or some relatability and find some sort of comfort in it,” Martin said.

Along with performing at the theater, Swyt and Martin also work at the Charleston Academy of Musical Theater company by helping with the younger kids.

“The first class I ever taught, when they did their performance I got to watch it … it was a very maternal feeling and it wasn’t just something that I like to do but I was helping give my love of theater to the next generation of little theater kids,” Swyt said.

Not only does Swyt get to perform on stage with her best friends, she also gets to help build the careers of the younger generation.

Martin is very passionate about the arts and makes clear how important supporting the arts is.

“Supporting the arts is a really big thing I want to do and make sure everybody knows that it is important. it’s something a lot of people do and it’s more common than you think in highschool and outside of it. There are so many programs out there that people don’t know about,” Martin said.

In her most recent performance, Martin was able to lead her fellow cast members in a very memorable performance.

“I got to play Dorothy in the Wizard of Oz and I’m a senior so it was really sentimental because it talks about home and the aspects of home when I’m about to leave home. It really touched my heart and I was a mess at the end of the show … It was a really cool experience that not a lot of people get and I’m really happy I got it before I left,” Martin said.