“Bombshell” an emotional roller coaster, but just an okay movie 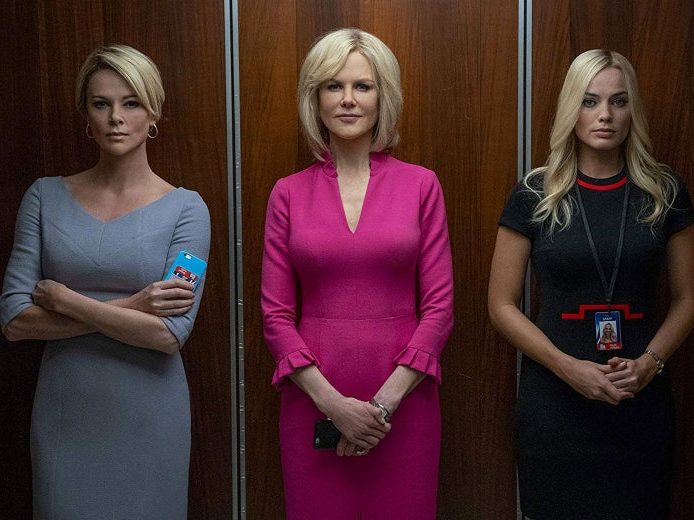 I tried to watch this movie I can’t even tell you how many times. The day it came out. The day after that. A few days later. Then I was out of town. All these stupid problems kept coming up one after another. This movie had better be good for all this.

One time I actually made it to the theater only to discover that — by the gracious hand of God Himself — the power was out. The person I was with and I thought that they might play the movie because the electricity came back when we walked in, but nooo. We sat in the theater for an hour and a half waiting for the movie to come on because we were told it would, while the speakers played samples of “Under the Sea” approximately 300 billion times like we didn’t already know that the song existed. “That was ‘Under the Sea’ from the Disney movie ‘The Little Mermaid.'” Yeah, we get it. The screen turned on for a minute but then it went off again, leaving us in the empty theater with popcorn and a giant Coke (American size). At some point we ran around the room and timed each other until we finally realized that the staff was not, in fact, waiting for all the systems to reboot, but weren’t planning on playing the movie at all. Note that other movies got to be played but not ours.

By the end of all of this it was about two or three weeks after the movie came out that I finally got to see what it was all about. I’m talking about, of course, “Bombshell.”

Directed by Jay Roach, a man of some classics like the “Austin Powers” movies and some disappointments like “The Hitchhiker’s Guide to the Galaxy,” “Bombshell” is a movie about an exceedingly creepy man who sexually harassed multiple employees of Fox News. A group of women band together to take him down and in the end (spoiler alert, in case you didn’t know this was a real event) finally do. It stars Charlize Theron, Nicole Kidman, Margot Robbie, John Lithgow and Kate McKinnon, among others. What I thought was really interesting about the cast was the high number of LGBTQ people it features. There’s at least two non-binary members, so yeah. Kinda cool to see that. I don’t know why, just cool. Also, the cast is mostly women, which fits in with the plot, obviously.

Right off the bat, my favorite part of the movie was how many old people were in the theater with me. That surprised me, to be honest, considering this was a movie criticizing Fox News. I sat down uncomfortably after coming in 20 minutes late and squeezing past a couple that looked disgusted that I was even in their presence. The commercials were still playing. They didn’t stop playing until at least 10 more minutes. Capitalism, am I right?

Then the movie starts immediately with narration. Narration. Now, I get that it’s supposed to give context to the situation, and it helped a lot, but any movie with narration at the beginning gets docked a few points simply for being too annoying and giving me the lack of willpower to pay attention to what’s being said. All I got out of that was something about the Fox News building floors. Like floor two was important, I think. And floor eight. But that’s all I understood.

And then the lady looked directly at the camera and talked to me for a solid 15 seconds. Like, what? Why? And then the narration stops and the movie picks up without it ever being spoken about again until the end, where there’s a little more talking to the audience about some motivational note. Kinda weird, if you ask me.

The film then goes into the story. But first it’s introduced by some plot about Trump because this all happened during an election year. I feel like some people thought it was unnecessary, but I think it was a good way to introduce the way Fox operates and give us some context of the character Whatsherface. (I will be referring to all characters this way because I missed when names were said and have no desire to learn them because I will forget immediately.)

After all this, the story kinda starts to get going. It takes a little bit but soon you start to see this 70-something guy Roger Ailes is a little more than interested in women. At the end of all of this, this guy sexually harassed some 23 known victims. And those are just the ones that came out. So it’s okay to attack this dude. Also he’s dead now, so what’s he gonna do about it? Him and some other guy got under fire. Maybe someone else, too, but I don’t remember. Again, the plot was a little hard to follow at times.

But the main message was that this dude is a total pervert that needed a good punch in the face. In the end he gets it (metaphorically speaking), but I can’t really tell if it’s a happy ending or a sad one, because some other guy gets to be in charge of the company, and everyone is upset. But then one victim just straight up quits, and it seems like it’s supposed to be a positive ending. I think part of the confusion was that I wasn’t paying attention to the character’s names and only remembered what the important ones did.

The camera work in this movie is pretty interesting. Sometimes it tries to act like a movie with choreographed, still shots, and then the next shot is so shaky it looks like someone was trying to film a sasquatch. And then it zooms in on someone’s face like it’s trying to be “Parks and Rec.” I guess it ties in with the fact that it’s a film about real events, which is kinda cool if you think about it, but I wish it would just pick one or the other. It wasn’t too bad to watch.

Now, I don’t know much about acting. I’m not planning on starring on Broadway or anything, so I don’t feel like I really need to, but in my opinion the acting was really good. It’s emotional, it’s powerful, it’s even funny at times. Yeah, funny. Like comedy ha ha type funny. It blended together pretty well and made the characters feel like real people, which it should.

Overall, I liked this movie. Not my favorite, but good. Better than people are giving it credit for, in fact. I’ll be the first to admit that I’m not exactly a film junkie, so I don’t really have anything to compare this movie to. It’s not usually what I would watch, but I’m glad I did. It uses deep emotion to really give the viewer the same feeling that people who go through this kind of stuff actually feel, if just a fraction of it.

And it delves into themes beyond just sexual harassment, mostly just stuff dealing with Fox and other corporations, but themes that I think were essential in describing the complex relationship between all the characters. Some were good, some bad, some in a kind of gray area either because they didn’t speak up or because they spoke for the company so that they wouldn’t lose their jobs.

There you have it. “Bombshell.” Kind of a bomb at the box office, but one that I would recommend watching.