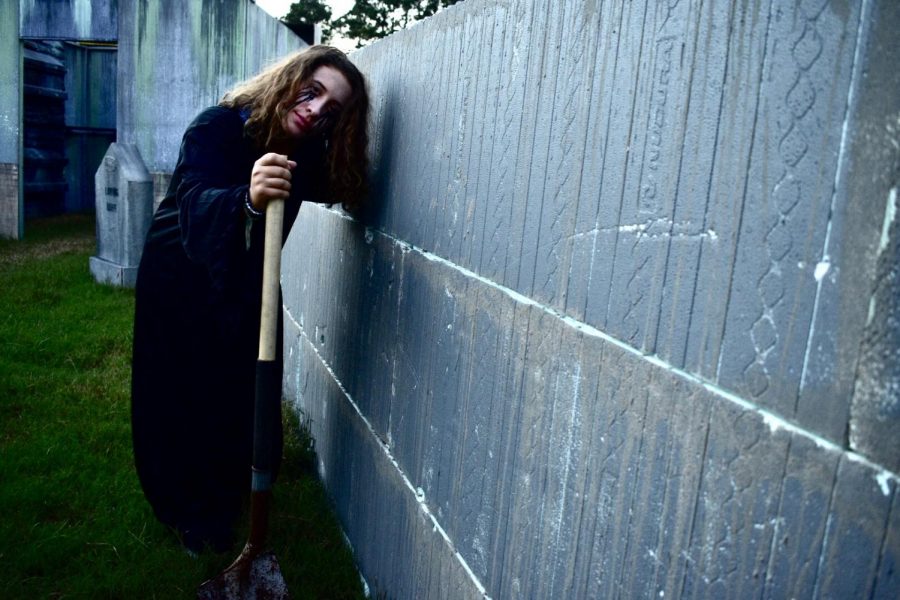 Ever since she was a little kid, senior Brooke Mackenzie has been dreaming of working at Fright Night.

“[Working at Fright Night is] not like any other job,” Mackenzie said. “You get to dress up and overall just act a certain way and scaring people is a lot of fun.”

Mackenzie plays a “Weeping Widow” who cries and screams over her late husband.

“I tell people that they are walking on my husband’s grave,” Mackenzie said. “A lot of the time I say that he is going to come after them next.”

Although some Fright Night workers want to pursue acting in the future, Mackenzie chooses otherwise.

“I just really love the ocean and scuba diving and I would love to learn more about it and try to help save it somehow,” she said.

Even though Mackenzie does not want to go into acting, she still makes the most of her time working at Fright Night and have fun with it.

“Honestly my favorite part is just scaring the kids,” Mackenzie said. “I think it’s fun because all of their adrenaline gets going and they start running so you know you’ve done a good job.”

“This one time I started crawling towards this couple and the guy screamed and grabbed the girl and started running,” Mackenzie said. “It makes you feel like you’re doing your job correctly.”

Mackenzie believes that people like the feeling of accomplishment after completing everything at Fright Night. “A lot of people love scary movies because it increases their adrenaline and keeps people on their toes,” Mackenzie said.

“To actually experience that in real life and knowing that you won’t get hurt during it it something a lot of people love to experience.”

For those who are contemplating over working at Fright Night in the future, Mackenzie said to go in with full force.
“Start doing your thing and they’ll put you in good places.” Mackenzie said. “You’ll have such a fun time with it.
Get ready to scream a lot and lose your voice.”