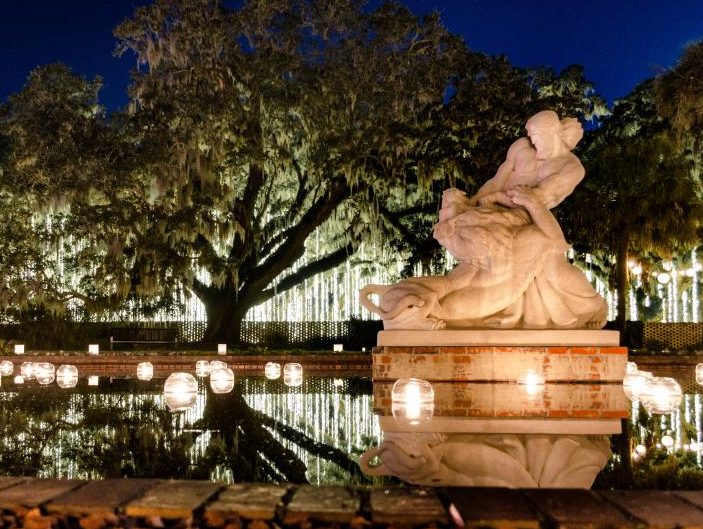 Brookgreen Gardens serves as a serene escape from reality

As a certifiably obsessed Percy Jackson fan, when my mother told me about a garden an hour away from us that is flourishing with Greek mythology sculptures, you can imagine my elation.

The place is called Brookgreen Gardens, located around Pawley’s Island, and every year all of December they have “Nights of a Thousand Candles” where they hand light over 2,700 candles and place them around the gardens, accentuating the sculptures of various gods and creatures.

I walked into the the big gates that welcome all visitors and immediately was encapsulated.

It was dusk when we arrived, making the glimmering lights that hung in the trees seem even more magical, and at that point I was done for. I went full “art girl” mode and took pictures of everything I could see — Aphrodite covered in gold, griffons pouncing in the air, and my personal favorite, Artemis with her bow, surrounded by the glow of sunset.

To put it this way, this was my personal heaven. If I die and the afterlife doesn’t have ponds full of floating cranberries with Zeus in the middle of it, I will be thoroughly disappointed.

As the sun drifted away under the trees and the moon drifted its way into the sky, the garden came alive. I felt as if I was living out my dream of being a fairy living in a mystical forbidden forest who is friends with little gnomes. Heaven.

Depending on where you are, the lights differ. Some hang from the branches of old Charleston oaks, a couple float in mason jars in the water, and the rest are simply scattered around the pathways, guiding you to the next creation on display.

I was entranced to say the least — and in 30 minutes I decided that this was my favorite place to ever exist, and jotted it down as the location for my senior pictures. I barely even talked to my family the entire time I was there, and if you know me, that’s saying a lot.

The Night of a Thousand Lights is, of course, for Christmas, and so they had tiny little hot cocoa stations along the trails to keep all the children warm, as well as a gigantic Christmas tree that they light every night. And when I say gigantic, I’m talking about the same size as the tree in The Polar Express, which, if you remember, was the size of a tiny city.

It was truly one of the best nights of my life. During the tree lighting, all the people in the garden comes together and circle around it like some Christian sacrifice, but in a warm, home-like way. We all sang along to Michael Buble as the entire sky lit up with the tree, and we just looked up in awe at this symbol of love and family.

That is the feeling that surrounds you at Brookgreen. Content. You stroll along in peace while you look at some of the most serene pieces of art, and you’ve escaped reality for a moment.

Personally, I’m surprised that they don’t leave the candles year round. It completes the sensation they want to give off — magic and timelessness. But maybe that’s the point. Something so entrancing can’t just be there constantly, or else it loses its significance. So during December, you need to make it a priority to see this place while you can.

It will never leave your mind.