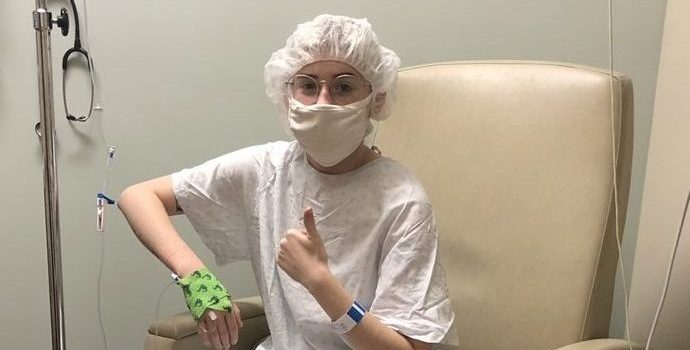 Senior Audrey Kelly prepares for her Lymphoma biopsy, sporting a dinosaur wrap for her iv, a hair net, and a gown. (Provided)

Senior Audrey Kelly prepares for her Lymphoma biopsy, sporting a dinosaur wrap for her iv, a hair net, and a gown.

No, you are not reading the vocabulary for your next Medical Terminology quiz. You’re reading the list of diseases or life threatening problems I believed I have had over the last couple of months. While I may not have had the things I just listed, I do have one diagnosis — hypochondria. Hypochondria is when you believe you have health issues with no real reason to think so — basically I could feel a pain in my chest and end up convincing myself I have lung failure.

My issue is not a small one — it gets so bad that I can spend at least five hours a day on WebMD looking at symptoms and feeling every inch of my body for lumps.

I’ve been to the doctor at least 20 times in the past year — they don’t even call me to confirm my appointment because they know I’ll show up.

I spent the day before my 18th birthday at Urgent Care because I thought my heart was decaying.

I’ve even had two surgeries in the past six months because I decided that I had two different types of cancer.

Why was I cursed with this never ending disease? Couldn’t tell you.  But what I can tell you is my own personal rankings of each reason I believed I was about to die. It’ll be fun!

5 – Coming in at last place is my liver tumor situation. Nothing really came from this one because I thought I had lymphoma at the same time and that one felt more important. Basically I can feel something poking out of place directly under my right ribcage and it’s not on the other side of my body so obviously something is wrong. It doesn’t hurt, but sometimes it pokes out more than at other times, so it’s a bit concerning. It kind of feels like a rib, but deadly. It’s still there, but I’m going to refrain from going to my doctor for at least another three months. Until then I will be checking it daily.

4 – In fourth place we have sepsis — the infection of the blood. My reasoning for this one was completely valid for multiple reasons. I had just found out that during my wisdom teeth removal they had left a part of my tooth in the socket, so they had to go back in and fix it. But they didn’t notice for 2 weeks, meaning the infection had time to spread. Spreading is bad. I was having night sweats, fatigue, issues breathing — all symptoms of sepsis. So I took my dying self to Urgent Care and demanded they give me a blood test. I did not indeed have an infection of the blood.

3 – Third place is hard, because my last three are my most traumatic and dramatic hypochondria moments, but I will be giving this slot to my heart failure. This happened at the same time as sepsis, because sepsis causes heart failure — do you see where I’m coming from? It makes sense. I had major chest pains, my heart rate was up — and by up I mean 127 beats per minute (which is not good) — and trouble breathing again. WebMD told me that I most likely was a victim of the blood infection spreading to my heart, so basically I was about to die. The day before I turned eighteen I was hooked up to an EKG and got a chest X-ray just to be sure. Turns out my extreme anxiety was causing my high heart rate and chest pains, not heart failure.

2 – This one is special to me. This is the one that started my downfall many months ago. My hypochondria was at a low for the past few years — almost gone, really. Until my girlfriend told me that a mole on my neck looked different. At first I ignored it, then I saw a picture — a mole I’d had all my life was growing a black raised bump inside of it. Now, you do not have to be a doctor to put two and two together and realize, “huh, maybe that’s not good.” I immediately started sobbing and started planning my funeral. I rushed home, looked at pictures over the last few months and realized you could see how it changed. My mother usually doesn’t believe me when it comes to this stuff, but even she was scared. Cancer runs in my family, and only in the women. Sexist, I know, but what can you do? Anyways, I had a biopsy days later where they literally held a ten inch needle in my neck for 30 seconds, which was disturbing, and then I had to wait. After ten days they confirmed I did not in fact have skin cancer, just a wacked out mole. Yay!

1 – Oh lord here we go. Number one. The real star of the show and cause for the increase in the dosage of my Zoloft prescription. Lymphoma, the cancer of the lymph nodes. I noticed my swollen lymph nodes in my neck about a week after my wisdom teeth removal. I did not freak out yet because I knew this was normal. The issue was — they never went away even after three months. One grew so big I could see it move around under my skin if I touched it. I got antibiotics — they did not help. This was a bad sign because they are not supposed to be swollen for so long and not respond to medicine. Regardless, I took myself to my doctor and demanded an ultrasound. Ultrasound came back fine but could not rule out anything yet. My anxiety then increased. So then I demanded a biopsy. But not an easy needle in my neck biopsy — actual surgery. My mother, the saint that she is, agreed. Most likely to shut me up but I didn’t really care about the reason if it meant I got an answer. The bad thing about hypochondria is that even if a doctor tells you you’re fine, you won’t believe them unless you’ve had every test possible to confirm that you’re okay. So I had my surgery. I went under the knife, woke up drinking apple juice and crying to my nurse about that apple juice. The recovery was tough because it was right under my jaw and I could barely move, but it was worth it. A week later I found out I did not have lymphoma; my lymph nodes are just annoying and don’t want to be a normal size.

While it has been exhausting, after my lymph node removal, my hypochondria has been very low. I’ve been working on coping mechanisms thanks to my therapist, and I had my girlfriend block WebMD from my phone. I still subconsciously check my body here and there but I’m not obsessing like I used to. Will it ever go away? Probably not, but maybe then I can gift you with another one of these lists. Until then, remember to check your lymph nodes, kids.