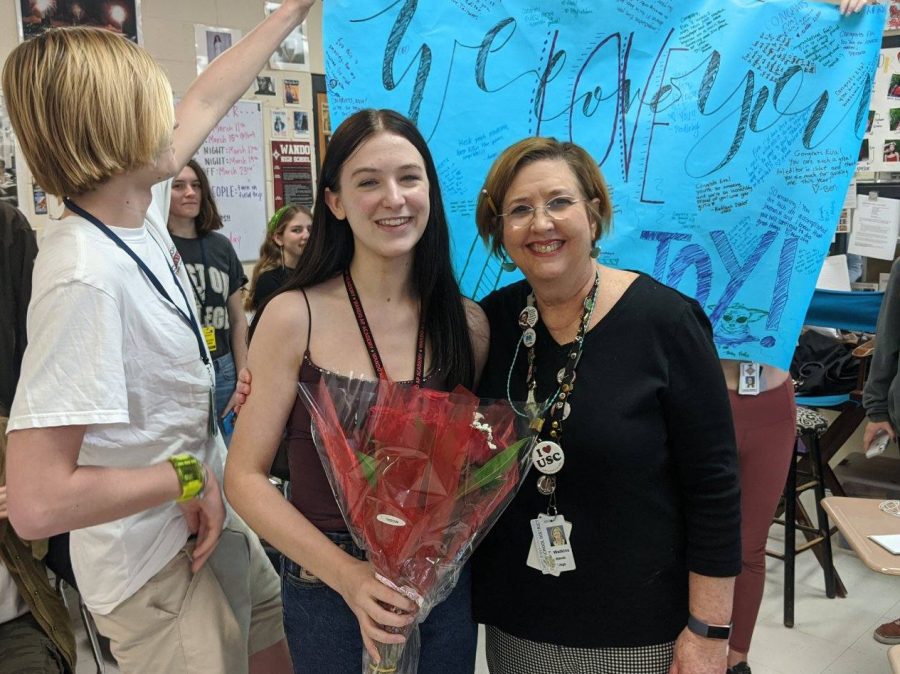 Co-Editor in Chief Eva Chillura and Adviser Tamela Watkins smile next to a congratulatory banner made by Tribal Tribune staff.

If the Tribal Tribune newspaper classroom is the girl, Riley, from the movie Inside Out, senior Eva Chillura is Joy: she helps everybody, she never runs out of energy, and the whole darn place falls apart when she isn’t there. No newspaper class goes longer than five minutes before somebody’s asking, “where’s Eva?”

Chillura is the heartbeat of the staff, and the whole paper is better for her being there. Her exceptional talent and passion for journalism have earned her respect, the position of Co-Editor in Chief and the recently announced award of Journalist of the Year from South Carolina Scholastic Press Association.

She’s a senior now, but her love for journalism began before she even knew what it was. In middle school, she had a journalist’s notebook in which she took notes on the world around her.

“I told my mom that I wanted to get it because I was like, ‘oh it’s really cute, it’s really cool.’ And she was like, ‘so are you interested in journalism?’ And I was like ‘I don’t know, maybe. I don’t know much about it,’” Chillura said. “I carried this notebook around with me everywhere, just in case something happened and I needed to write it down.”

The journal gradually filled with notes and thoughts, including a compilation of classmates’ complaints about a club and several lists of interview questions.

On the very first page, she had a pro-con list for what it would be like to be a journalist.

So when she entered high school, she decided to find out for herself. She took Journalism 1 her freshman year — and she immediately thrived there.

“Right off the bat, when I had her, I could tell that she was a cut above most freshmen,” said Phillip Caston, Journalism 1 teacher and yearbook advisor. “Very intelligent, very poised, very much had her finger on the pulse of the world. Just knew what was going on. And when you get students like that in the class, it just makes the whole class experience better. The rest of the class kind of feeds off kids like that.”

Caston noticed how the rest of the class followed Chillura’s example and tried to be better students themselves. She had such a strong impact because she didn’t just work hard — she was truly happy doing it.

“I always liked getting out and talking to people I didn’t know. That was a reason I liked it at first,” she said. “And I also liked it because I was good at it. I got a lot of praise in that class, and I had never really found something that I was spectacular at… I wanted to be the best at something, or good at something at least.”

She was good at it… but not only that. As if her energy and enthusiasm weren’t enough, Chillura’s character came through in a time far more stressful than deadlines or interviews. It was during the last month of the class, when they were all working on the final project.

“What happened during that time, was when Faith [Dutton] died,” Caston said. “I was useless as a teacher after her death, I couldn’t function or pretty much do anything, and I just remember Eva, she just realized that. And she just took over. She was a lot like Faith in that sense, I guess… And I even remember the Monday after Faith passed away, all the yearbook kids were in my class. We’re all a wreck, but we still gotta have class. And they’re putting the paper together, and at one moment I just looked, and I kind of watched Eva, and she’s just kind of taking care of us… She was just sorta going around the room and you know, picking up things and moving stuff for us and checking off people. It was nothing that she was required to do, but she took it upon herself while still, at the same moment, doing her project.”

Seeing all of this, Caston introduced Chillura to Tamela Watkins, the Tribal Tribune’s adviser, and pushed her to join the newspaper staff.

“Caston told me that I should go and meet the editor in chief that year of the school paper because he wanted me joining the paper, and I met Fran [Mathewes] when she was one of the editors that year, and I met Mrs. Watkins,” Chillura said. “And just talking with them and seeing their process and talking about what the paper meant to the school — that was the moment where I was like ‘Ah. That’s something that I want to do.’”

Chillura was not the only person Caston talked to about this. He sang her praises to Watkins as well, excited to see her in coming years.

After Chillura joined the staff, Watkins was just as impressed with her as Caston. Her stories were amazing, for one. She’s won writing awards at SIPA (Southern Interscholastic Press Association) competitions every year she’s been on staff. But just as important to Watkins are her values. Watkins recalls Chillura’s junior year, when she won first place for feature writing at National Scholastic Press Association.

“As they kept calling out names, they were like ‘fourth place, third place, second place,’ and then she was first place, it was so exciting. And I think the kids on staff and I were more excited than even she was, because she was like, ‘awards don’t really matter, I’m just glad that it was a good story. That I told her story like it should be told and that the young lady that it happened to felt like she was heard,’” Watkins said. “And that, to me, speaks volumes about Eva as a person. She always says that it’s not about the awards. Not that we can’t enjoy the awards, but it’s not about the awards, it’s about telling the truth and telling the story.”

Chillura achieved this because she is a good writer, but also because of her intuitive understanding of what journalism is, Watkins said.

“She comes up with really creative, different ideas of what to cover. For example, that story she wrote last year about sustainable fashion. When she first told me that, I was like, ‘what the heck is sustainable fashion?’ And then after she wrote the story, I was like ‘whoa, this really is interesting,’” Watkins said. “While she understands it’s important to have fun and to be friends with each other, she also adds a gravitas to the staff, like it’s our responsibility to cover really important stories and to find really important topics that are important for students to know… She just really has this understanding and love for what journalists do, what importance journalists have in our society.”

All of this is seen by not only her teachers but other students, and it makes her a great role model and Co-Editor in Chief.

“It’s tough to win respect,” Caston said. “Generally that comes when other students can step back and look at you and realize, ‘you are very capable. You are the person that should be in charge. We’re going to follow you. We know you’re the one who should be leading the show.’ And I think she commands that respect.”

So it wasn’t much of a surprise when Caston’s second prediction came true — except to Chillura.

“It was really exciting, I was in the middle of an assessment, it was like some partner work we were doing in English class, and I got the email [from SCSPA] and I just kind of jaw dropped,” Chillura said.

The rest of the newspaper staff learned that she’d won Journalist of the Year shortly after from Watkins. The whole class was overjoyed.

“Mrs. Watkins said, ‘Eva, have you looked at your email today?’ And I said, ‘I always check my email.’ And she was like, ‘no!’ And so she put me in the back room and wouldn’t let me leave for the entire period, I think it was fourth period, while she last-minute planned a whole celebration for me,” Chillura said. “She got Jeff, her husband, to bring roses from a grocery store, and she got Emma to make a big poster that everyone signed saying congratulations. It was really cool.

“Unfortunately, I had to carry those roses around with me for the rest of the day,” Chillura laughed. “I got so many promposal questions, but no, it wasn’t that.”

High school may be drawing to an end for Chillura, but she doesn’t plan to leave journalism.

“It keeps me fresh,” Chillura said. “You can always change up your writing style, you can always change what you’re writing about… Doing the same thing every day, that’s not journalism. Yes, it’s an office job, but you’re getting on the phone, you’re going out and doing interviews, you are interacting with people that you wouldn’t normally interact with, and you’re learning something new every single day, which I think that is something really special. And that’s really why I love it now.”

Chillura’s teachers look forward to seeing what she does after high school.

“I think Eva’s going to go places, do amazing things, whether that’s journalism or not,” Caston said. “This is going to be one of those things where when she’s accomplishing great things, and people look through her whole record, they’ll be like, ‘oh, she was also her high school editor in chief and journalist of the year, that’s cool. That’s a nice little thing she has along with all these other amazing things that she’s done. This is a great honor, but I don’t think this is the last time we heard her name.”

Caston’s been right so far about Chillura, so there’s every reason to believe his last prediction will also prove true.

Watkins, who has had Chillura in her class for the past three years, is thankful for the time she got to spend working with her.

“I think she’s done a tremendous job leading the newspaper staff, along with Ted [Fairchild, the other Co-Editor in Chief],” Watkins said. “And I am so looking forward to what she’s going to do in the future, because I know it’s going to make a difference in the world.”