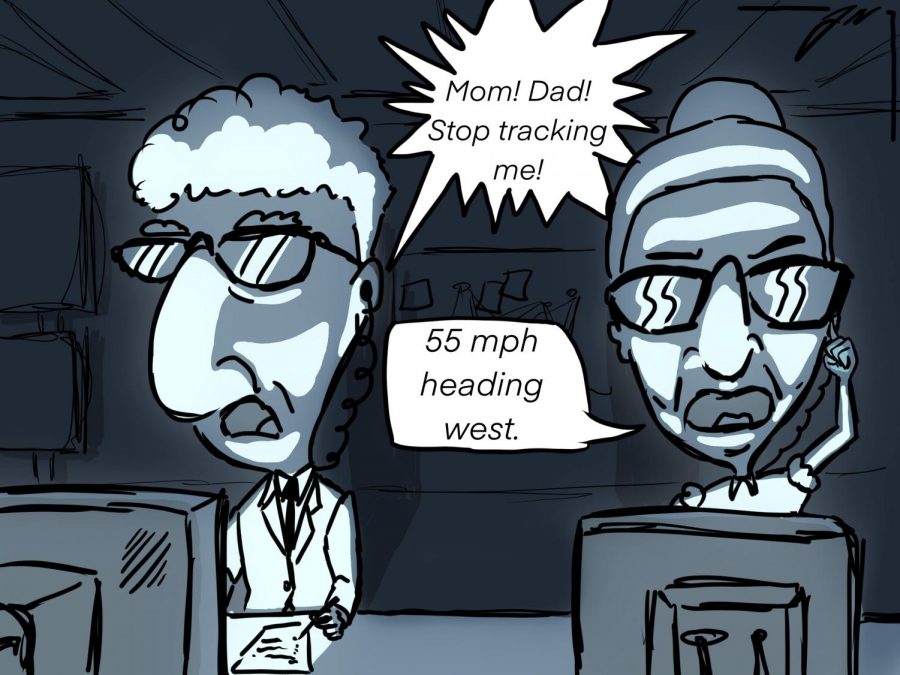 Few words can strike fear into the hearts of adults and children alike as the dreaded T word.

And there’s a good reason for that.

Parents hate to see their children growing up. In a few years their children will be going to college, paying taxes — even moving far away. Ultimately parents just want to make sure their children are safe, and in the modern digital age apps like Find My iPhone allows parents to keep a healthy watch on their kids.

But no other service has caused the controversy that Life 360 has — at least among teenagers.

Offering accurate location tracking, battery monitoring and even roadside assistance with the full package, Life 360 sounds like a simple upgrade to a commonplace location app. However, it also offers a driver history of where users have traveled, check ins at specific locations, driver reports that include speed and braking and regular updates on a user’s whereabouts.

It is perfectly reasonable and normal to ask a child where they are going and to make sure they got there safe, especially given how horrible Charleston drivers are. The  problems with the app start to arise from how much power it gives parents who misuse it.

The best analogy for this is that the app is essentially training wheels: the teenager goes the speed limit because he knows his parents can see if he goes slightly too fast or brakes too hard, and so for the time being they will drive exactly how they are told.

The issue arises when it becomes time for these training wheels to come off, when a teen is thrust into life unprepared and finally free to drive at the speed he recklessly chooses to go. All the app does is simply delay the inevitable: it cannot stop students from speeding for the rest of their lives, it just gives them a few more years until they see those blue lights asking them to pull over.

Speeding tickets are just a fact of life; it’s a simple mistake everyone has to make at some point and is really the only way people ever learn to slow down. But to be honest, this is not necessarily to do with one location tracking app. As terrifying as some students find Life 360, a large number of users use it in a healthy manner to make sure their loved ones are safe, the issues we have stated show a far larger issue.

Life 360 is not really the problem, it’s just a symptom.

The real issue is quite simple, parents and teenagers don’t always communicate in a healthy way. Teenagers need some form of independence to actually learn for themselves and develop the maturity they will need in life. But in the same vein, they also have to be more honest with their parents. Most parents simply want to make sure their kids are safe, and especially when teens are driving a car often paid for by parents, they have the right to know that.

And when a service comes around that gives incredible surveillance powers to its user, it’s not the app’s fault parents might abuse it.

It is not the first and will not be the last way parents can over-involve themselves in their children’s lives, but ultimately it will not solve any of the issues they are hoping to prevent. Say a child decides to simply leave his phone at home for fear of the consequences of going to a friend’s house. While he brings up no red flags on the app, he is now deprived of a potentially life-saving device. In the end, parents would always rather the child have his phone than go without it. The point is, teenagers find a way, the app will not solve anything, and ultimately it just is not healthy on the child or the parents’ end.

There really is only real solution: they just need to have a conversation. Parents would not be watching their children’s every move if they trusted them enough not to, and teenagers would not be trying to trick a GPS if they were able to just tell their parents the truth. An invisible eye watching teenagers every move is not the way to have that conversation, but then again, neither is lying to your parents.

The real problem comes not from an overbearing parent, or a rebellious teen and especially not from an app designed to help families stay safe; it’s just a lack of connection. Parents and teenagers have to find a healthy way to decide boundaries, teenagers have to be able to make mistakes to learn from them and parents ultimately should be able to know if their child is safe.

We can’t tell you how to do this, but sometimes all it takes is a simple conversation.