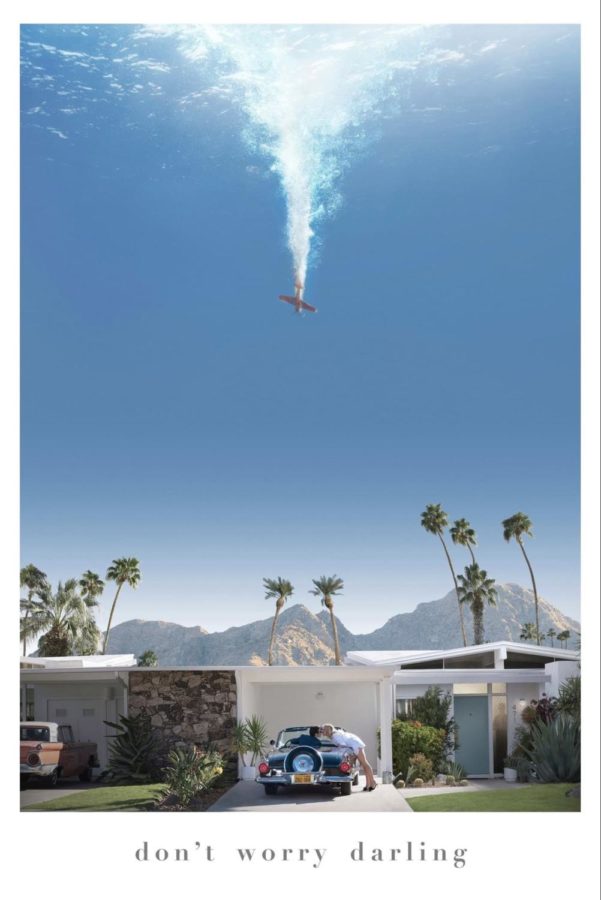 Harry Styles was right, the movie really does feel like a movie.

In recent memory, I cannot think of a movie release with more drama surrounding it. Accusations, script rewrites, and film festivals have held Don’t Worry Darling in the forefront of Hollywood, and the public’s, minds for months. I don’t blame them either. Seemingly unprofessional directors and script changes, not to mention Harry Styles himself in the middle of the drama, makes for a good story. But drama doesn’t make a good movie.

Attempting a psychological thriller is hard. So many have been done that they tend to become predictable and monotonous. Don’t worry darling fights that precedent well, creating a thrilling and thought provoking film that truly does feel like a film, not just a movie.

Don’t Worry Darling, released September 23rd, is the tale of Alice and Jack Chambers, a husband and wife living in an idealized community in the 1950’s, played by Florence Pugh and Harry Styles respectively. When things around her start happening without explanation, and people around her begin to act strange, Alice Chambers starts to question what her and Jack are doing. What follows is a provocative tale of a woman’s world crashing in on her and the fall out of an intricate web of lies.

Florence Pugh performs incredibly. That’s to be expected, she’s Florence Pugh., but Sstill it needs to be said. She shows a deep range of emotion while still feeling true to her character the whole time, it was incredible to watch. Her and Chris Pine (who plays the communities leader, Frank) are the two best actors in the movie. In my humble opinion.

Now, when talking about Harry Styles, I have to be careful. He’s great, I love him, who doesn’t? But when it came to his performance in the movie, it was mediocre. I don’t blame him for that, it’s only his second movie release, he hasn’t had that much experience acting, and he’s playing next to seasoned actors like Chris Pine and Florence Pugh. Even the supporting characters have more documented acting experience than him. He wasn’t set up to be the star, and it’s not his fault, so please don’t attack me for saying that, but still, his performance was lacking for the amount of time he was spending with the director. I’m just saying.

Moving past the actors, the rest of the movie was set up to stun. Visually, I was captivated the whole time. The use of color was beautiful, and I don’t have time to analyze the whole thing, but I will say that this is an English major’s dream. The choices made to make Alice and Jack stand out were beautifully clear and yet somehow also subtle, and there were scenes in there that I could write essays about the symbolism of. Truly, the movie is stunningly written and produced.

With all that being said though, this movie is R rated, so expect graphic content in most meanings of the word. Don’t bring your parents. Or your kids. But, do go into it with an open mind, clearly I think the movie was amazing, and I’m planning on seeing it in theaters again, but I know people who think it wasn’t all that it was made out to be.

My opinion though? It’s the perfect psychological thriller.