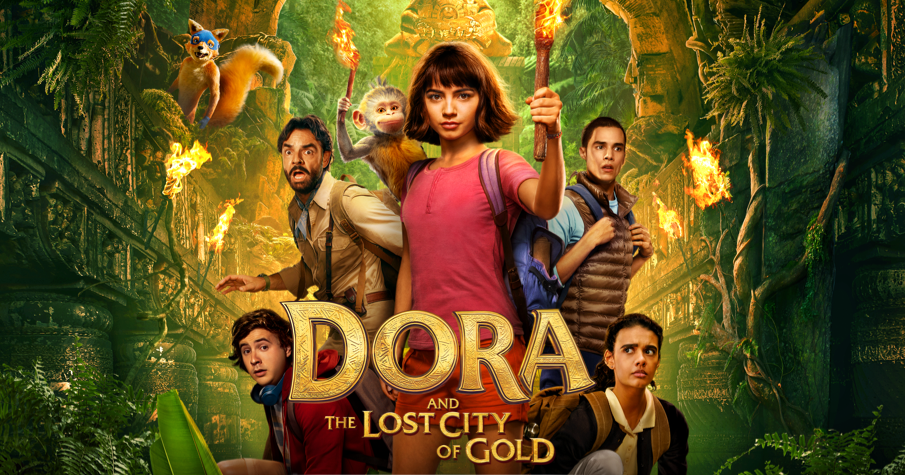 “Dora and the Lost City of Gold” disappoints

My lifelong obsession with Dora began at a young age, from learning rudimentary Spanish, to memorizing useless geography knowledge, Dora left a larger impact on me than any person ever has. For junior prom I almost had to go alone as my date refused to wear a purple backpack and pink T-Shirt. Thankfully she caved, and I could finally realize my longtime fantasy of being able to put my arm around my lifelong hero. As you can probably guess, when I discovered the film Dora was in theatres, I was overjoyed. I rushed out the door wearing my red boots and carrying my Dora plush figures, only to find that no matter how many times the writers attempted to kill Dora, it was ultimately the film that succeeded.

The only real way to describe the experience of witnessing “Dora and the Lost City of Gold” was that had it not been for a friend bravely agreeing to suffer through this complete narrative failure, I might not have been able to stay in the theatre. Except for one 40-year-old man, we were the only ones there, and for good reason: no parent should ever force their children to sit through this hour and a half of pure torture. Somehow the greatest adversary to Dora’s exploration is not a fox who routinely commits armed robbery and theft, but a cast and crew that failed to research the intricate lore of Dora, and most of all, puberty.

There really is no way to describe the premise of this film in a non-blunt or condescending way; the entire film is written as if it thinks I am a child. Dora is separated from Diego as a child. A decade later she reunites with him and has to go on a quest to save her parents and find gold. Along the way she meets new friends who have plenty of wild and comedic moments, or at least that is what I imagine the pitch to producers sounded like.

In reality, the real plot is the struggles of a teenage Dora to understand and survive the most dangerous creature of all: high schoolers. It was ingenious to mix the single most influential and most iconic film character in cinema and meld it with the underused teen drama, and I was overjoyed to see that was exactly what Nickelodeon and director James Bobin chose to pursue.

However, my dreams of seeing boots and backpack skipping class to graffiti bathroom stalls were crushed, ruined by the riveting dialogue between Dora [played by Isabella Moner] and her anthropomorphic animals and clothing accessories being thrown out the window in favor of cliches. The beautifully developed “Backpack” is replaced by the nerdy comedic relief, Randy [Nicholas Combe], the fan-favorite “Map” was disappointingly sidelined in favor of the popular bully with a heart of gold, Sami [Madeleine Madden], and even the beloved Boots devours his famous “Boots” in an opening scene clearly symbolic of his desire to remain uncivilized in the face of Dora moving to Los Angeles.

The relatively simple premise of the film is really just that: simple. There is nothing else in the movie but a stale quest and bad writing. Only two characters even have arcs, if it would even be possible to classify them as such. The main character of the film experiences no character change. From the time she is six till she is 16, Dora stubbornly refuses to change, much to the dismay of quite literally every character in the film. The lore of Dora was clearly not a consideration of the writers and crew of the film.

Most disappointing was the portrayal of the relationship between Dora and the love interest Diego [Jeff Wahlberg], whose chemistry was sidelined in favor of a terribly rushed platonic friendship. The years of character development that was set up to lead to an emotional climax was pushed to the side to make room for a new liberal, tree-hugging take on the characters. Doing so essentially gave the writers and director a blank storyboard and millions of dollars. Common sense would have said that creativity would have been easy to find, and in that aspect it excels for all the wrong reasons. The most creative and imaginative scenes in this movie were also quite possibly some of the most terrifying or horrible I have ever labored through.

Many scenes stuck out in this film, but none quite like the out of place and frankly disgustingly sinful “Poo Song.” As one of the few musical numbers in the film, it is essential to the character arc of Sami. It shows the completion of her journey towards accepting the other members of the group and learning to accept others. However, the effect is entirely lost by both the rushed development of an unlikeable character and the strange manner in which it is performed. The immense potty humor of the scene is immature and childish, and it easily sticks out as a low point in the film. That is not to say, however, that this film does not have shorter but possibly lower points. From Dora bringing a military-grade knife on a class field trip without consequence, to a minute-long sequence of Dora’s father [Michael Peña] beatboxing dubstep, the film is not short of scenes memorable for all the wrong reasons.

Possibly the single most scared I have ever been in a movie was watching the terrifyingly rendered animated Boots stare blankly at Dora, just before the voice of Danny Trejo thundered out of his marsupial lips. I was utterly unaware that Danny Trejo was voicing Boots, and I wish I had been, knowing such information would have saved the drink I was calmly enjoying as well as my sanity.

However, obscure and strange some of these scenes may be, one did stick out for a good reason. Although watching three of the characters become drugged and hallucinate was strange, it gave way to the only visually pleasing section of the film. In the scene Diego, Dora and one other side character accidentally become drugged by spores from a plant that act as hallucinogens. It soon becomes clear the scene only exists for one reason: the hallucinations are in the form of cartoon Dora. Watching the film in the style of the classic adult swim program Dora the Explorer is entertaining and a relieving breath of fresh air from the abysmally dull forest setting.

Similarly to this, the acting is nothing short of stellar; I truly believed I was watching a television show on the big screen. Isabela Moner, in particular, gives a fantastic performance as Dora. Whenever Dora would turn towards the screen at surprising times and ask “Can you say delicioso?” I would find myself instinctively yelling it back to her, hoping for her to notice me.

At the end of the day Dora does manage to have a few moments that are truly heartbreaking and would reduce any decent human to sobbing, specifically watching Dora be viciously bullied with the nickname “Dorka.” That being said, the other hours of pure agony watching a beloved heroine be misused makes the entire film a failure.

This heathenistic and unprofessional mess of a story should not be seen by anyone, under any circumstances. I cannot stress enough how little stars I would enjoy giving this creatively bankrupt hack of a motion picture.