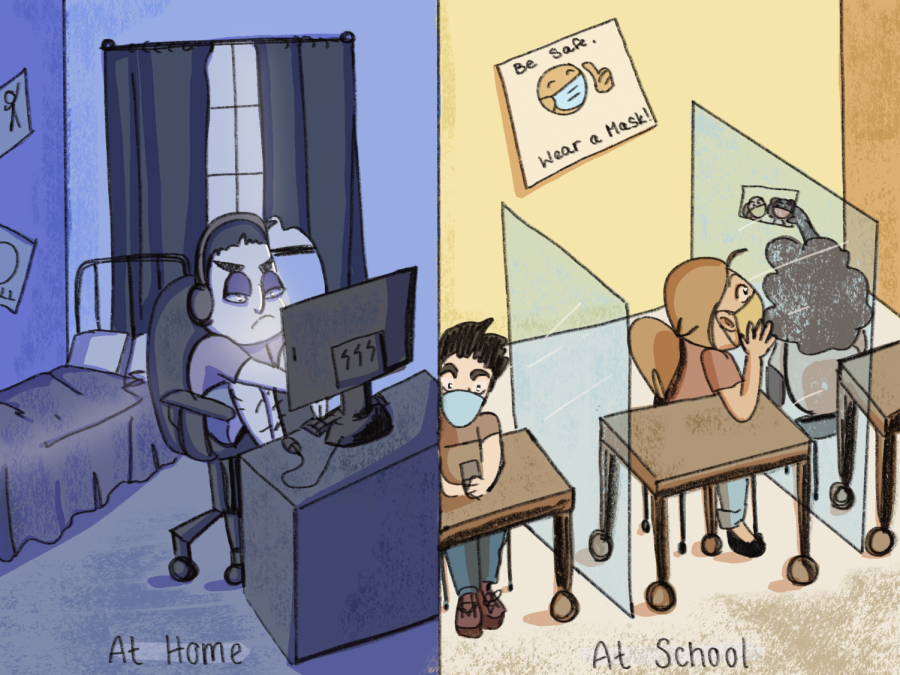 Wake up at 8:25. Login to class at 8:30. Fall back asleep by 8:40. This is the acquired schedule of most students who have not been in a school building since March 13. There’s no structure for these kids; no one to tell them they need to stay awake due to the option of concealing their face through the infamous zoom camera.

Granted, there is a pandemic occurring, and safety measures need to take place. But who is looking out for the students who have a bad home life? What about those who have severe depression either caused by quarantine or worsened by it? Kids at this age are at their most vulnerable, and without having a schedule, it is too easy for them to fall into unhealthy habits.

Currently, schools are only bringing back a certain capacity due to regulations made by the state, which, in theory, sounds good and makes sense. But once they hit the max number, the rest of the students that are at home are stuck there indefinitely. Basically, school is now first come first serve.

Many studies have shown that kids have become more anxious, depressed and/or lacking social interaction that their brains need for development. More students are resorting to alcohol, marijunia or other harmful substances because of this depression, and emails from teachers can hardly do much. They need an outlet, and while they watch snapchats of their friends having fun in the lunchroom, they are sitting in their dark room in an empty house, perfectly alone. How can one expect people to work hard on things where the only motivator before was seeing their friends, when they can’t even do that anymore?

Not to mention the aspect of learning, which is almost nonexistent for virtual students. It is too easy for them to simply turn off their camera and drift back into a slumber, the voice of their teacher fading more and more into the background. The teachers aren’t naive; they know that most of the kids probably aren’t conscious enough to be listening to them, but they also know that it’s hard to force them to do things when they’re not in a classroom; they’re almost too scared to. If kids are upset, all they need to do is simply click “leave” and avoid any real punishment for their actions.

Then test day comes, and they rely on a quizlet to make up for weeks of information. And it usually does. A quick “A” is given, with no proof of cheating, and the cycle continues and continues. But it’s hard to blame then when, again, there’s nothing holding them to school — all of the perks of it are gone. No laughs with friends, no goofing off in the hallways and no Chick-Fil-A runs before the day starts. Nothing to motivate them to actually do the hard parts.

School is hard enough even when the students are in person and they can’t leave the classroom, but add in the option to make excuses to not show up at any time and there’s no real hope for the kids that need it. The cycle of only waking up to prove to the teacher that you’re at least awake for roll call is no way to learn in the long run. If parents were home, maybe it could be different. Maybe those kids would at least have someone to hold them accountable and they need that, despite what they say. But the parents have their jobs. They have to keep up with the slowly failing economy that COVID has brought into the world, so staying home isn’t an option. Some kids have one parent, and others are being raised by grandparents. There are too many factors for each student, and a black and white solution given by the schools do not meet the needs of the students in the grey.

There’s no denying that yes, we need safety to be a priority. There are still many deaths caused by COVID and we don’t want to add students to that list. But there needs to be a way to cater to both sides — safety and education. Perhaps half the school goes Monday and Tuesday, Wednesday is a break for everyone and a disinfecting day, and Thursday and Friday the other half goes. The days that the students aren’t physically there, they do virtual. This way , every child gets a chance to socialize, be motivated or even get out of a troubling household at least two days a week instead of zero.

There is a way to adhere to regulations but also take care of the student’s mental health. We need to do it.

According to CNN Health, suicide attempts have doubled since the beginning of quarantine. Don’t let our students become an increase in this statistic.