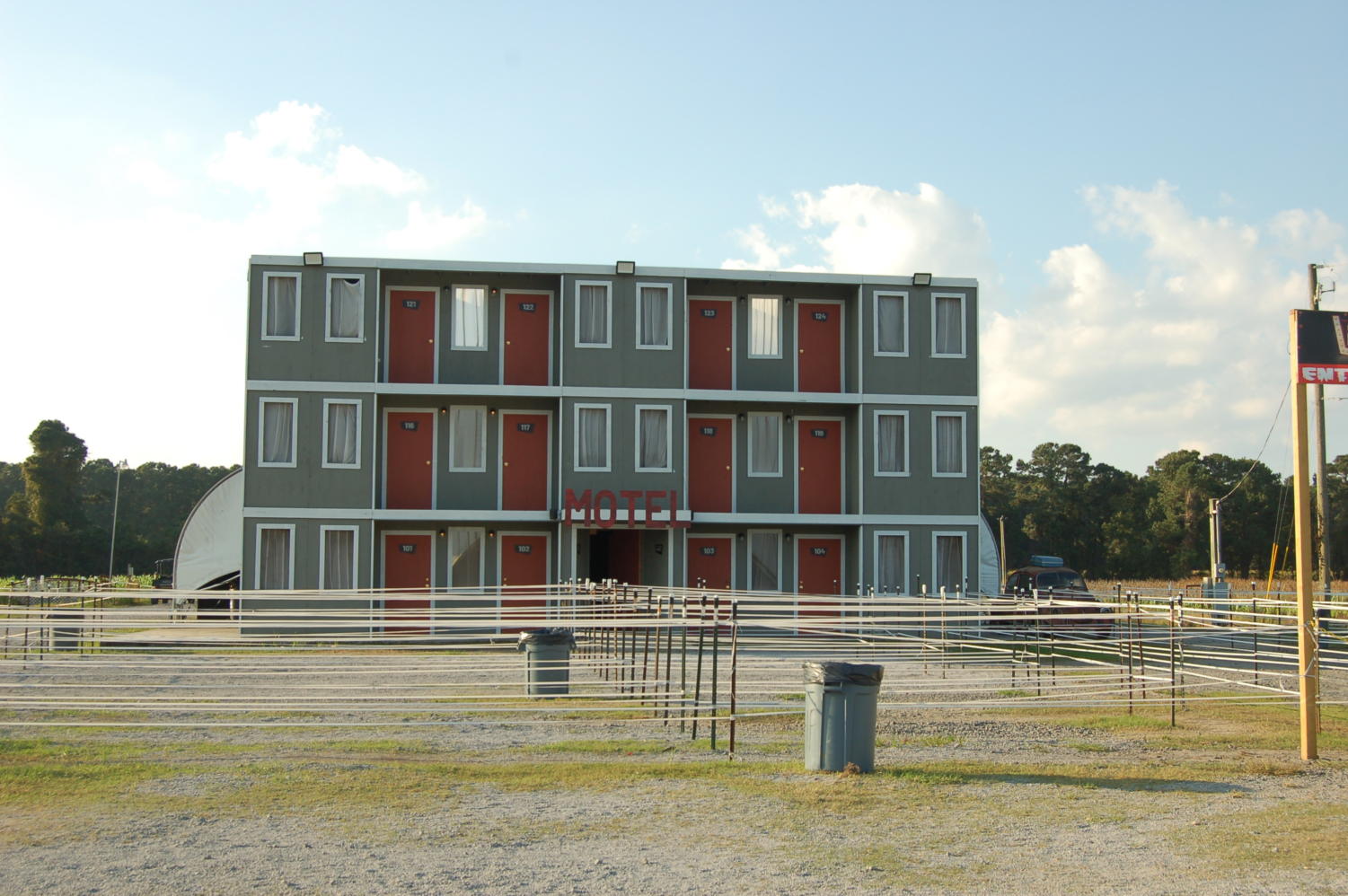 The theme of one of Fright Night’s attraction was “Motel”. This picture embodies the outside of the attraction. (Caity Williamson)

The theme of one of Fright Night’s attraction was “Motel”. This picture embodies the outside of the attraction.

Once mid-September rolls around in Mt. Pleasant teens get excited at the sight of a clearing in the farmland on highway 17. One that will transform into a nightmare.

The area where they spent their younger days picking strawberries and pumpkins has taken a frightening turn. But this turn is much-anticipated.

For the past fifteen years, Boone Hall Farms has put together what they call  “Fright Night,” for ages twelve and over to enjoy. The idea of Fright Night is to scare visitors as much as possible, with different themes every year. Last year’s theme was a jail cell, and despite the pandemic going on, many people still attended.

However, this year’s theme is one that has been widely known and used throughout history.

Boone Hall Farms’ website states, “Check- in available. But beware… this could be your final destination inside these crumbling walls of terror.”

Wando students are given the opportunity to either enjoy the attraction, or be a part of it. Many students at Wando will dress up as the theme, in an attempt to scare everyone that comes in. Along with a motel, Fright Night provides their visitors with two more attractions to choose from.

A haunted hayride through the fields with creatures and props hanging from the trees is the second attraction offered. Characters can jump out when guests are on a small trailer being pulled by a tractor. Going into areas with no lighting means having the unexpected occur. Many times throughout the ride, the tractor will come to a stop, and the characters have the chance to catch up to the tractor. When this happens, they normally jump onto the tractor, causing havoc and fear for those on.

The next attraction is a toy factory. On the website, it’s given the name “Tiny’s Toy Factory Anarchy,” with a quote saying, “It’s Tiny’s last stand. The question is will you survive the evil destruction or be left to rot beneath these factory walls?” As expected, this attraction will haunt guests, and bring to life items in a toy factory.

With the main attraction being the motel, the two others will be related to it as well. However, Boone Hall didn’t just come up with the motel theme. This theme has been used throughout movies, books, and even TV shows.

At Fright Night, however, the characters are prohibited from touching anyone at all times and being locked in a room won’t happen.”

One of the more famous horror movies is The Shining, with the Overlook Hotel. The main character, Jack Torrance, takes a job offer to watch over the hotel, later finding out how haunted it really is. Details of how the motel will be set up are still unknown, but chances are it will be haunted.

Another famous movie taking place in a motel is Vacancy, released in 2007. A married couple gets stranded in an isolated hotel named Pinewood Motel, and if they don’t escape they will be murdered by the manager.

At Fright Night, however, the characters are prohibited from touching anyone at all times and being locked in a room won’t happen.

Another famous horror movie relating to a motel is Psycho, released in 1960. When the main character’s girlfriend checks into a motel and doesn’t return, he and her family go on a hunt to find her, only to learn she was murdered along with a few others.

All three of these famous horror movies have a connection to a haunted motel, whether it was the main setting of the crimes or connected to a web of murders.

Since visitors won’t know what the motel setup will be like, they can only guess what will be inside.

Getting tickets, though, can be difficult. Since this event is so popular, selling out is expected. Online tickets are limited once again, but there are plenty of chances to get tickets as well. Buying tickets at the boxes when at arrival is a common way too.  Fright Night opens on Sept. 25, and will close Oct. 31. Passes such as “The Scream Pass” and “VIP Faster to Fear” are available to buy if guests want to do all three attractions.

With Fright Night opening soon, teens will be spending their money on Friday night thrills and screams all month long.