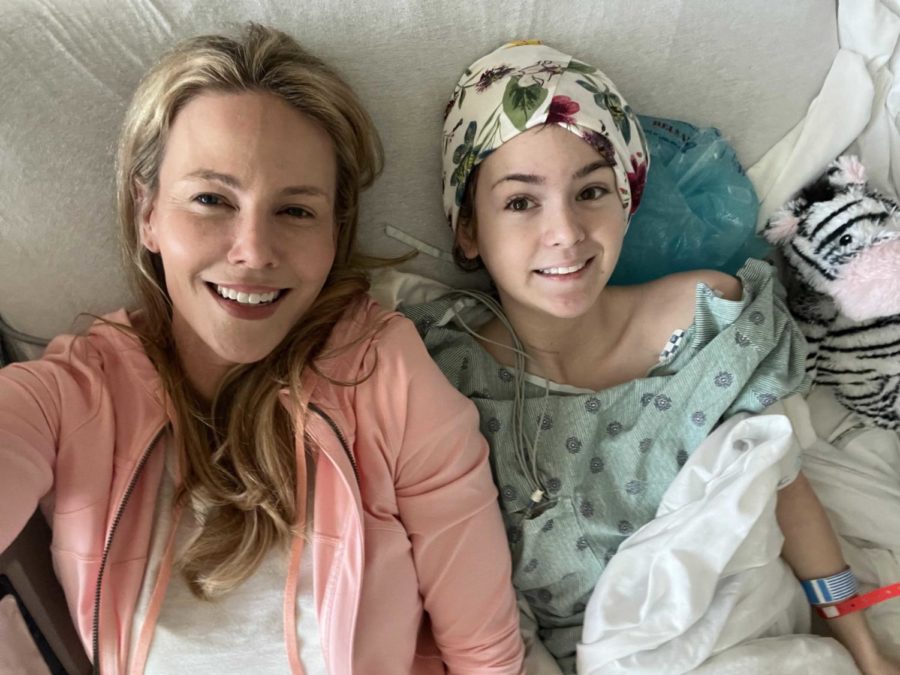 Sydney just had surgery to get a GJ tube inserted. She was terrifed but happy to see her mom. “God may give you more than you can handle, but he will also help you through the unthinkable because you were never meant to “handle” it alone.

A deep ache creeps down her neck. A sharp, intense, stabbing pain controls her forehead. Constant pressure around her eyes. Ice melting on her forehead, trying to take the pain away. Most of the time, the inability to physically walk.

In March of 2020, Sydney Severance came down with a virus. A virus that triggered everything. Sydney soon became extremely sensitive to light, constantly asking for the curtains to be closed. A headache started, and it never went away. Nausea, vertigo, and a ringing in her ears began.

“We started going to doctors, seeing so many different specialties throughout the summer and throughout the fall and I was in and out of the hospital that fall for pain control,” Sydney said.

With all the physical pain endured, Sydney’s mother, Ashley Severance, was there every step of the way. Noticing a change in Sydney’s behavior early on, Ashley knew something was seriously wrong.

“As the months went on she got more and more symptoms and… it was really tough because this kid who used to love to be outdoors with friends, she became where she came home more,” Ashley said. “I even found her in my closet sleeping on the floor because she wanted the darkness because the light really made her headache worse.”

After 10 conventional MRIs, multiple trips to different doctors, and even a visit to a cervical chiropractor, she still had no answers. It wasn’t until November 2020 that Sydney was given her diagnosis through an upright MRI.

With the upright MRI, patients are forced to stand upright, rather than lying down, to see potential structural damages in the spine. For Sydney, the travel and pain from this MRI was strenuous, but crucial.

A connective tissue disorder, otherwise known as hypermobile Ehlers-Danlos syndrome and Craniocervical instability. No one in her family, including herself, had ever heard of these. But after months of excruciating pain, she finally had some answers.

“Ehlers Danlos syndrome can affect every organ system since connective tissue is everywhere in your body,” Sydney said. “Mine is a very severe case and basically it has caused a lot of different organ systems to not work how they should.”

“I had a spinal fusion from my skull to C-3 and that kind of stabilized my spine a bit and it was a big surgery and I had a really long recovery from that,” Sydney said. “Eventually [after] six months of intense physical therapy and a lot of…rest, I regained the ability to walk by the summer of 2021.”

After this surgery, Sydney once again started hanging out with friends. Her life seemingly had returned to normal. However, with the complications of hEDS, it also caused a diagnosis of Superior Mesenteric Syndrome, along with other stomach complications, due to the rapid weight loss and malnutrition she endured.

Spinal pains increased, and Sydney once again lost her ability to walk. Back to bed confinement. Back to little movements. Back to constant, agonizing pain. Multiple surgeries for feeding tubes were needed in order for her body to receive the nutrients it needed.

Early this year, she underwent not one but two spinal detethering surgeries.

“[The first surgery in January] helped me some but not all the way,” Sydney said. “It helped for like a month but then my spinal cord re-tethered… and I ended up having to get a repeat of that surgery this September.”

After so many unanswered questions about Sydney’s illness, receiving the news about her potential CCI and hEDS was relieving to Ashley in a way. However, getting her to Greenville for the upright MRI was a challenge due to Sydney’s mobility.

“I’m thinking ‘I can’t get her to Greenville; I barely got her to that appointment’… because it was so hard to move her around because every time we moved her around, it causes microtrauma,” Ashley said.

Because Greenville was the only option for the upright MRI, Ashley had no choice but to transport her daughter there. Thankfully, close friends were able to fly Sydney to the Upstate.

As Sydney went through months of intense physical therapy, she met people with similar illnesses.

“We were leaving physical therapy one day and she said ‘I’m one of the lucky ones’, and I’m thinking ‘Man I don’t feel very lucky, this has been kind of hell… almost 3 years into it’ but being the positive kid she is she’s just always looks at the glass half full,” Ashley said.

Feeling as though she had more resources compared to others, Sydney and her family sat down and created a plan. A plan to bring an upright MRI to the Medical University of South Carolina. A useful, yet critical piece of equipment that MUSC lacks.

With her CCI, normal MRIs were unable to see the structural damage due to the fact that she was lying down flat.

“I was brainstorming with my family and we were… like ‘let’s raise money for one’ and then of course we looked at how expensive they are and we were like ‘wow ok this might be a lot harder than we thought but lets do’,” Sydney said. “It really gave me a purpose and a goal when my health was so bad. It gave me something to focus on that was more positive.”

After recovering from her first spinal fusion surgery, Sydney officially started fundraising during the summer of 2021 for what she and her mother have dubbed Operation Upright.

Anna Medlock, a former Wando student and a close friend of Sydney’s, has done what she can to help spread awareness about Sydney’s fundraiser and goal.

“A ton of her friends have gotten together to sell wristbands that say ‘Operation Upright’ and she’s also been doing nonprofit benefits to raise money for them as well,” Medlock said.”I’ve been advocating for it through social media and just been talking to her and raising money through myself and family just trying to promote it.”

Knowing Sydney before she got sick, Medlock said seeing her friend go through so much pain was extremely difficult.

With about $1 million raised of the $1.2 million goal, Sydney is one step closer to reaching her goal. By sharing her story online, she has been able to connect and reach others experiencing similar stories.

“For so long… I was so sick and we had no idea what was wrong and none of the doctors knew and that was just the scariest thing for my whole family. We literally thought I was going to die and have no explanation to why,” Sydney said. “I feel like by sharing my story I was wanting to hopefully reach other people that maybe don’t know what’s going on with their health but that somethings wrong and get them to maybe look into this disease that’s a lot more common than people think.”