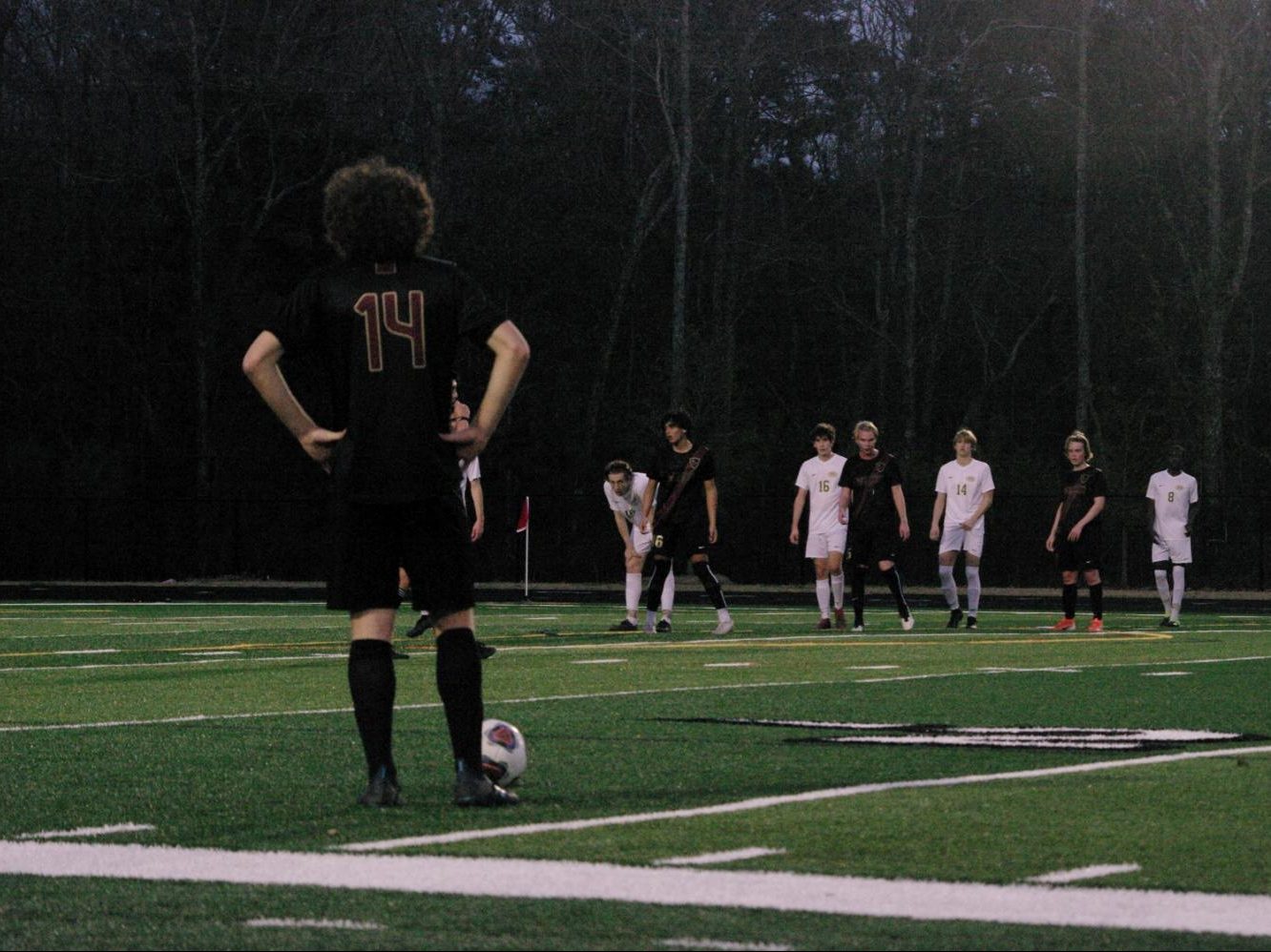 Sophomore Beckham Voelker prepares to kick the ball back into the game after a foul on Summerville. (Emily Coker)

Sophomore Beckham Voelker prepares to kick the ball back into the game after a foul on Summerville.

Last year, on April 22, 2019, it was Wando boys soccer senior night. The Warriors beat Cane Bay, 5-0. This year will not be the same. This year on April 22, the S.C. High School League will reconvene to determine the fate of Spring sports amid the coronavirus pandemic.

There may be no senior night for any spring sports.

COVID-19 has cancelled and suspended events big and small, local and national, throughout the country. In a virtual meeting on April 2, the SCHSL continued the postponement of spring sports through April 31.

For seniors, that could mean an early end to their career and missing out on senior athlete milestones.

For juniors, it could mean missing out on key recruitment opportunities or development for next season. Spring sports like soccer, lacrosse, softball, tennis and baseball have been forced to wait — like the rest of society — in limbo.

Varsity boys’ soccer head coach Shilo Tisdale knows and expects his players are keeping fit over the break. He and the team are still hoping for a chance to finish the season.

“I’ve been in contact with many of the players, many of the leaders, who kept me informed they’re still training, still exercising, still working out, still doing these things that they can to help themselves individually, so hopefully, hopefully we get back and as a team they’re able to get right back into the mix,” Tisdale said in a phone interview.

Boys soccer has won the AAAAA State Championship three years running. He said the program succeeds because his players strive for success.

“Trust these guys that they are going to do what it takes to stay fit. That’s  one of the reasons I believe we have been such a strong program over the years,” Tisdale said. “These kids want to do it. I trust them that even if I’m not there overlooking it, that they are doing what’s best for the program.”

Tisdale said his program was fortunate to have had the opportunity to succeed in the past.

“[They] as seniors are able to say you’ve never lost a state championship… obviously I want them to stay humble and stay appreciative of the time they’ve had,” he said. “And if it doesn’t work out to where we get to make another run, then it doesn’t work out. It’s beyond our control, but just really appreciate the time we’ve had and the accomplishments they’ve had.”

These kids want to do it. I trust them that even if I’m not there overlooking it, that they are doing what’s best for the program.”

Other coaches who haven’t had that opportunity, he said, are in a harder position than his reigning state champions

“I would think it’s more difficult for, and should be, every other team out there that doesn’t know what it feels like to win a AAAAA state championship, and our guys have,” Tisdale said.

Junior midfielder Trey Jackson got to experience two of those state championships with Tisdale. He said he and his teammates are keeping fit during the quarantine.

“Usually I’ll go out for a run every day,” he said. “I’ll try to do an at-home workout that Coach Shilo sent out to us, and if I can, I’ll do technical skill work at my house, in my garage.”

Even if they don’t get the opportunity to play again this year, Jackson is excited for next season.

“I think next season we’re going to be really good. We had 20 seniors this year,” he said. “We didn’t bring any freshman up (to varsity), but we brought up a lot of sophomores and juniors that’ll be on the team next season. I think we’ll do well next season.”

The COVID-19 disruption has had an impact on his recruiting process for college.

“It’s been affected a lot, I had surgery this past summer, which affected my club season recruiting, and now with this, basically my entire junior year is out the window for recruiting, but I don’t have any lost faith,” Jackson said. “I still get stuff from coaches, still contacting coaches, so I’m worried, but not too worried.”

“Our coach, Coach [Shannon] Champ is sending us every day or every other day, workouts to do, like running sprints, little workout circuits and ball work,” she said. “She’s encouraging us to keep our skills sharp with everything we can do in our free time. The team is still staying sharp.”

Vambyer said that as a senior, it is tough to possibly miss out on her senior privileges and moments.

“I would say COVID totally eliminated our season, it sucks. All of the seniors are really looking forward to maybe going to the state championship and now we don’t have a season at all most likely,” she said. “It’s just really sad for all of the seniors and the rest of the team.”

The situation has caused some athletes to realize the camaraderie they experience during the season. Varsity senior softball first baseman Caroline Palemantrio will miss being with her teammates as her career may come to an end.

“[Playing softball] you build friends for life, and it’s sad that you won’t get to spend every day with them,” she said. “You kind of build these relationships and friendships that you never would have expected.”

Palemantrio’s reaction was one of disappointment when she first heard the news.

“I was really sad, we really have no idea whether or not we’ll get back on the field or not, so it was just kind of heartbreaking,” she said. “This is my last season as a senior, and I won’t be playing in college, so I was really looking forward to getting things like my senior night, and practicing with my team for the last year. I was just really upset.”

Athletes all around the globe are sidelined from their courts and fields and driven from their stadiums and arenas.

I was really sad, we really have no idea whether or not we’ll get back on the field or not, so it was just kind of heartbreaking.”

Boys’ lacrosse middle senior Jacob Neale was disappointed at the likelihood of missing out on his last year of high school lacrosse.

“It’s having a pretty hard toll on us because we have around 16 seniors and our season has gotten pretty heavily destroyed,” Neale said. “We still don’t really know what’s going on, but a lot of people are pretty doubtful that we are going to get to play again.”

Neale said he and his teammates have been using the break from school and sports to focus on their fitness.

Like Neale, varsity tennis senior Will Bumgarner said despite the quarantine restrictions, the tennis team is staying proactive in the case the season continues.

“Our coach is actively suggesting things and what not, making sure we’re staying in shape and really just keeping ourselves entertained during this time of uncertainty,” Bumgarner said.

Head Coach Charlie Painter, who is new to Wando this year, is communicating with his players virtually, Bumgarner said.

“He’s texting us, he’s really keeping us positive about it you know. Just like all of us, he wants to get back to our season. We started really strong. We had a very strong first week. We beat two of our toughest opponents we play all year,” Bumgarner said. “He’s really just there keeping us positive and being a good coach and making sure we’re all okay.”

Even with the positivity, Bumgarner wonders what could have been in store for him and his teammates this season.

“We’ve been state runner-ups the last two years, and we have — we think — the best team we’ve had in a long time. We thought this year we were gonna break the barrier, but you know it sucks we might not have the opportunity to… the thing is we’re all in this together,” Bumgarner said. “Hopefully we get that phone call or that email saying we’re going back to school.”

Baseball is yet another sport left wanting by the coronavirus. For Major League Baseball, that means no spring training and like Wando, indefinite postponement. Senior varsity shortstop Evan Grant was upset about the announcement for postponement, but he and his teammates are going to keep preparing.

“As a team we are all trying to stay optimistic and trying to stay positive about everything, making sure that we are working during this break,” Grant said.

Grant felt the postponement would impact the team depending on how they handled it.

“We might have one practice before we have a game, and we just have to make sure we are staying on our stuff because we are a team that is supposed to do well this year,” he said. “We could either make this a minor setback or a major setback, and hopefully everyone makes it a minor one.”

With a 7-1 so far this season, the Warriors looked in strong contention for a successful season. Grant and his teammates were bummed to lose at least some of their season to the Novel Coronavirus.

“It’s not the best thing for us like we were hoping to come out strong and start off everything well because we started off with the tournaments pretty well but it being pushed back just downed everyone,” he said.

Senior Connor Cino, Grant’s teammate and a University of South Carolina commit, said the team is still holding out hope that they can return to the field.

“I’d advocate for a shortened season, maybe a big tournament, and make that the playoffs,” he said, adding that the team will be ready when there is more certainty about the future.

“If we come back, and we’re able to play, I have faith in my team,” he said. “Everyone’s still putting in the work and trying to get better, and so if we come back to play, I still believe our team will be just as good as when we left.”