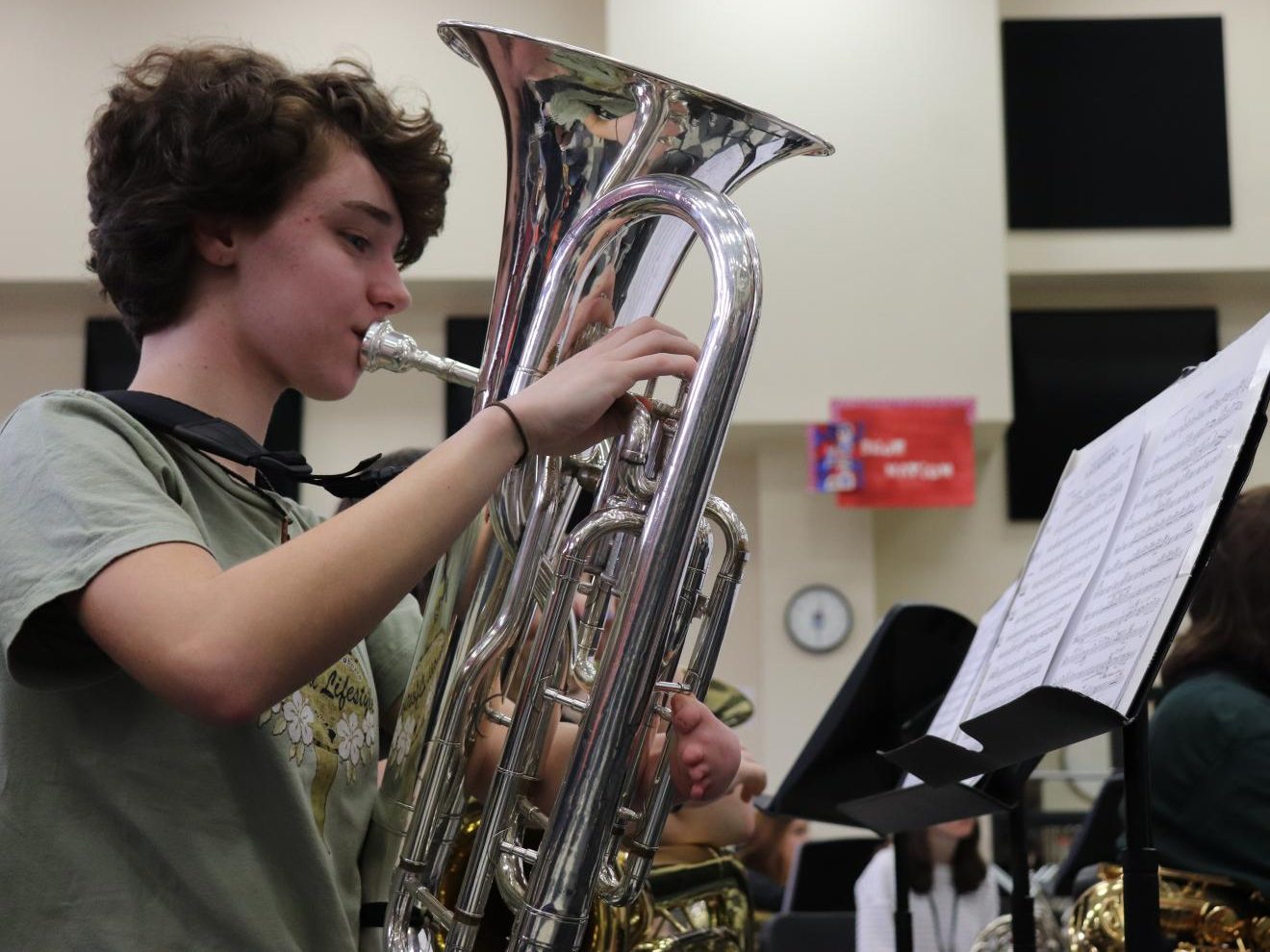 Finding her place in music

It’s not something you’d likely notice if you passed her in the hall. Junior Alyssa Gantenbein is a nice, funny, normal girl… Except for one thing that’s a little different. Her left hand.

Or rather, her lack of one.

“So basically,” Gantenbein said, “when my mother was pregnant, the umbilical cord wrapped around my left wrist and it just kinda stopped my left hand from forming.”

The result is that her left arm looks no different than any other, but her left hand didn’t develop correctly and is basically unusable.

“There’s not a lot of people with my kind of disorder. Usually it’s a whole arm or something, but just the deformity is rare,” Gantenbein said.

Rare or not, it’s certainly given her unusual challenges to deal with that most wouldn’t even think about.

“It makes certain tasks that would be super easy for a normal person kinda difficult, like scratching your right arm, tying your shoes, washing your hands, putting on deodorant, doing your hair — I could never do, like, a bunch of hairstyles and things,” Gantenbein said. “Simple things.”

Gantenbein used to be self-conscious of the difference.

“When I was younger,” Gantenbein said, “I used to think about it a lot, like ‘oh, why do I look different than these kids?’ Kids would come up to me and be like, ‘what happened to your hand?’ and that kinda stuff.”

But even then, you might not have known it bothered her.

“I used to joke around with other kids,” Gantenbein said. “Saying that ‘oh, it gotten bitten off by a shark,’ or I was in some freak accident’ or something like that, just to spook some people. It kinda gets looks sometimes.”

She took something others would be self-pitying about and had fun with it.

“It used to bother me a lot,” Gantenbein said. “I’ve started to accept it now as I’ve grown older. I used to want prosthetics, that kind of stuff, but they’re more just for aesthetic, not really for any purposes. And I was like, ‘I don’t want that, I want something that would help me.’”

And even now, she deals with people who jump to conclusions.

“People will come up to me and be like, ‘it’s ok,’ thinking that just because I’m disabled on the outside doesn’t mean I’m disabled on the inside. So a lot of people think I have special needs or anything like that,” Gantenbein said. “I don’t, besides the normal anxiety kind of thing.”

However, despite having a lot to overcome, she lives very much the same as your average high schooler. She even has a job at Taco Bell, though it wasn’t easy to get.

“It’s hard to find a job,” Gantenbein said, “because people would look at me and be like, ‘she can’t do any of the things.’ But, I actually can.”

She can do anything. Or almost anything…

“There’s a few things I can’t do,” Gantenbein said. “Opening jars. That’s a thing that is hard.”

However, she’s also accomplished things that most two-handed people would struggle to do — among the most impressive is making it into the top band at Wando, the Symphonic Band.

“When I moved here, and I was going into sixth grade at Cario, Mr. [Jeff]Scott, the director over there, he came up to me one day and said, ‘I want you to be in band,’” Gantenbein said. “Because he heard how interested I was, but I didn’t think I could do it with my hand. And he noticed that I was good at recorder, which — I don’t think I was, but he was like, I want you… And that really got me into music.”

But wouldn’t it be difficult for her to play most instruments with only one hand? Absolutely. But still, she found a way to join in.

“I play the euphonium, which is a sitting instrument that you only need your right hand to play,” Gantenbein said. “That was the only instrument I could play because of the loss of my left hand. Woodwinds, out of the question. Percussion, out of the story. And there’s the trumpet that I really wanted to play when I was a kid, but I didn’t quite have the arm strength for that. The tuba was just too big, and trombone, I think it’s a left-hand instrument. So the euphonium was the only instrument — it’s a good thing I’ve gotten really good at it, because there’s nothing else I could do.”

It may have been her only option, but that doesn’t seem to faze Gantenbein.

“I love the euphonium. It’s such a unique instrument, and there’s not a lot of female euphonium players that do it as a career,” she said.

The instrument is far from the only thing she loves about band, though. Likely just as important is the community she experiences there.

“It’s like a big family, honestly,” Gantenbein said. “You spend a lot of time with these people and at first, a lot of people didn’t even notice. Even last year, one of the band directors just came up to me; they were like, ‘by the way, I never noticed about your hand.’ And I’m like, ‘cool, thanks for telling me.’ And sometimes, especially during marching season, there’s certain choreography that I can’t do so I have to go to a band director and explain, I can’t do that. And they’re like, okay, we’ll change it. So they’ll help me out and change something for me. People are always just very nice and accepting.”

Band is a place where Gantenbein is free from the questions she gets everywhere else, where she isn’t thought to be incapable or different.

Junior Alyssa Gantenbein doesn’t have a left hand. But she doesn’t let it hold her back.