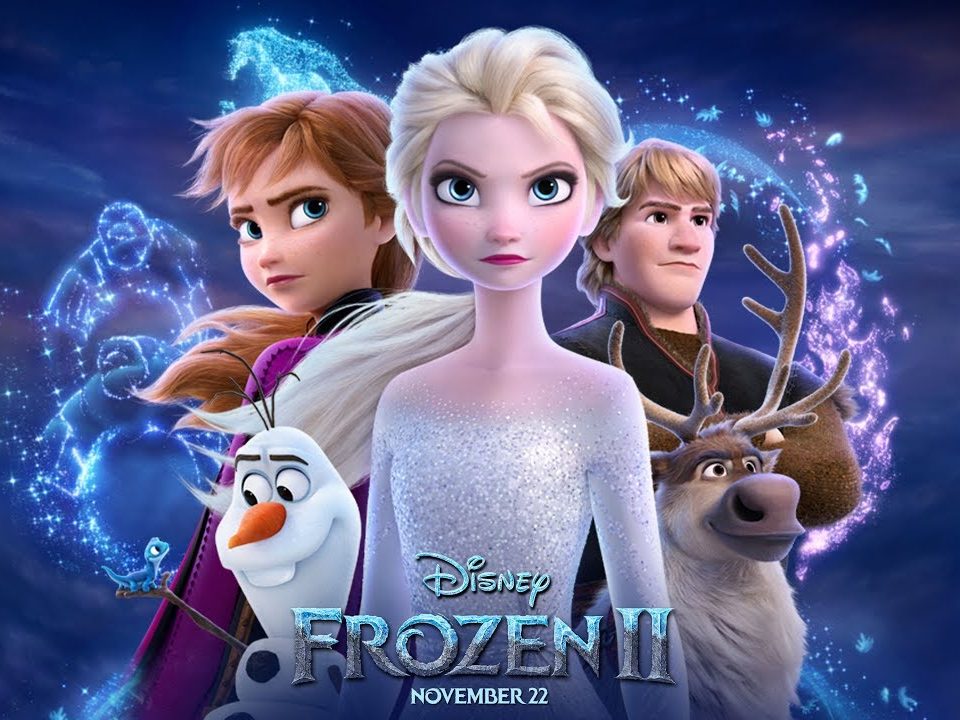 It’s been six whole years since Frozen first came out, and thank god its sequel didn’t get released earlier or else I wouldn’t have even bothered to sit in the theater. It was the perfect length of time to get “Let it Go” out of my head so I could actually let myself enjoy Frozen II without that annoying power ballad haunting me.

The original cast returned to reprise their roles, which was a big relief. There’s no way anyone could replace Broadway legend Idina Menzel (RENT, Wicked) as Elsa. Jonathan Groff (Hamilton) came back to voice the lovable Kristoff, Josh Gad (The Wedding Ringer, Beauty and the Beast) playing Olaf the snowman, and my absolute favorite, Kristen Bell (The Good Place), reprised her role as Anna.

Despite an extremely talented all-star cast, I couldn’t help but expect another pathetic Disney cash grab, especially since the plot that was marketed in trailers was vague and sounded more cliche than a Christmas romantic comedy.

I was scared that I was going to be proven right when a young Elsa and Anna appeared on screen, playing with snow in an opening scene that mirrored the beginning of the first film. However, the scene’s mood changed very quickly when their father told them the story of how he became king.

I’m not going to lie: that’s a lot to unpack, but this bedtime story was so beautifully done and so important to the plot that I was finally convinced this movie was going to be at least on par with its predecessor, something I didn’t know Disney was willing to do with its sequels.

The plot is driven forward when Elsa awakens the elemental spirits after hearing a strange voice calling to her. The spirit wreck havoc on the kingdom and cause everyone to evacuate. Elsa and Anna, accompanied by Kristoff, Olaf and Sven the reindeer, journey into the enchanted forest their father told them about in order to discover the truth about the past and save their kingdom.

The beginning of the movie flowed smoothly, and the potential for character development had me hooked. The teasing of Elsa’s powers being more than what was shown in the first film was the perfect way to expand upon her character and give her more room to grow over the course of a second movie.

Unfortunately for Anna, her character stayed static throughout, constantly being worried about Elsa and not paying much attention to Kristoff, who she’s supposed to love. Kristoff’s development when it came to his relationship with Anna felt like a side-story that took away from the main plot. It was an inconvenience that was solved so easily that it didn’t need to be dragged out, though it did present one of the more comedic elements of the film.

The plot had consistency until the main characters got separated. At that point, it was more a matter of finishing Elsa’s story since she was the main part of the plot. It got to a point where the movie quickly halted her story in order to give Anna and Kristoff something to do.

Olaf was just there for the ride, and honestly, I kinda liked that. It was refreshing to get his point of view on things, especially since his character has become innocently nihilistic since the past movie and stays that way throughout the film.

I did admire the constant importance of the elements and the story that was told to Elsa and Anna as children. The two were perfectly intertwined, and although the movie ended very abruptly, these concepts provided a sense of stability and consistency during moments where the pacing felt weird. They were always in the forefront of the movie, influencing character interactions naturally and allowing for beautiful animated scenery.

No movie is perfect, but I enjoyed the fact that I was able to overlook Frozen II’s flaws and appreciate the world building it brought that the first movie didn’t have time to explore. It was a refreshing Disney experience, with love being the side story and being able to see the rights and wrongs of the past being the main message, a message that many young kids are starting to receive in media marketed to them.

Frozen II was not the best overall, nor is it going to be as popular as Frozen, but it has a more mature tone for its audience who’s grown up a bit and an intriguing plot that is able to build upon what it had to start with. This alone makes up for the weird treatment of Anna and Kristoff, but isn’t enough for me to consider it one of the best.