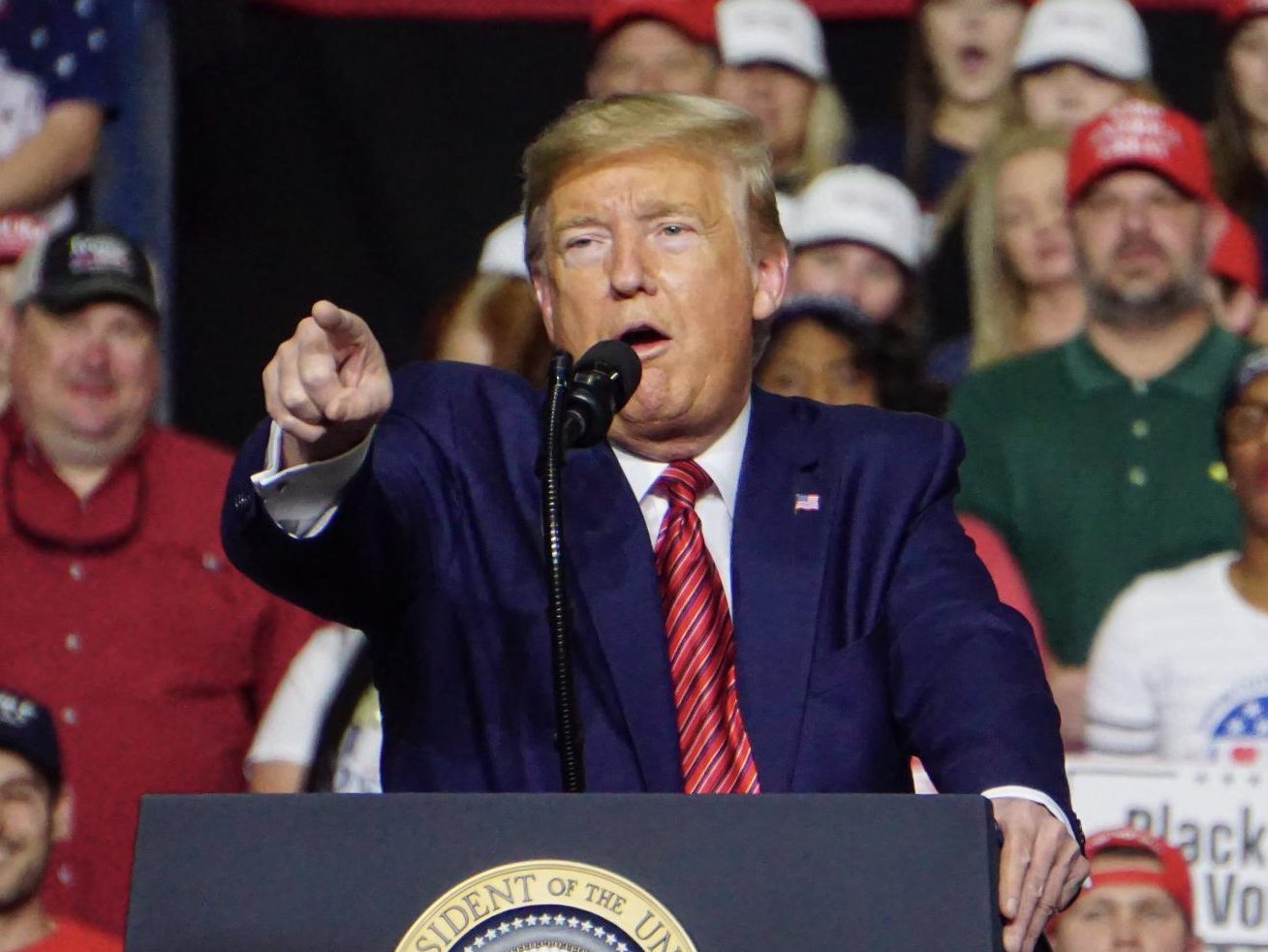 President Donald Trump points towards a camera while on stage at his Feb. 28 campaign rally. “The press is in hysteria mode [over Wuhan Coronavirus]” Trump said. “CNN, fake news — and the camera just went off” he said pointing at a camera whose shutter had just closed. (Hana Donnelly)

President Donald Trump points towards a camera while on stage at his Feb. 28 campaign rally. “The press is in hysteria mode [over Wuhan Coronavirus]” Trump said. “CNN, fake news — and the camera just went off” he said pointing at a camera whose shutter had just closed. 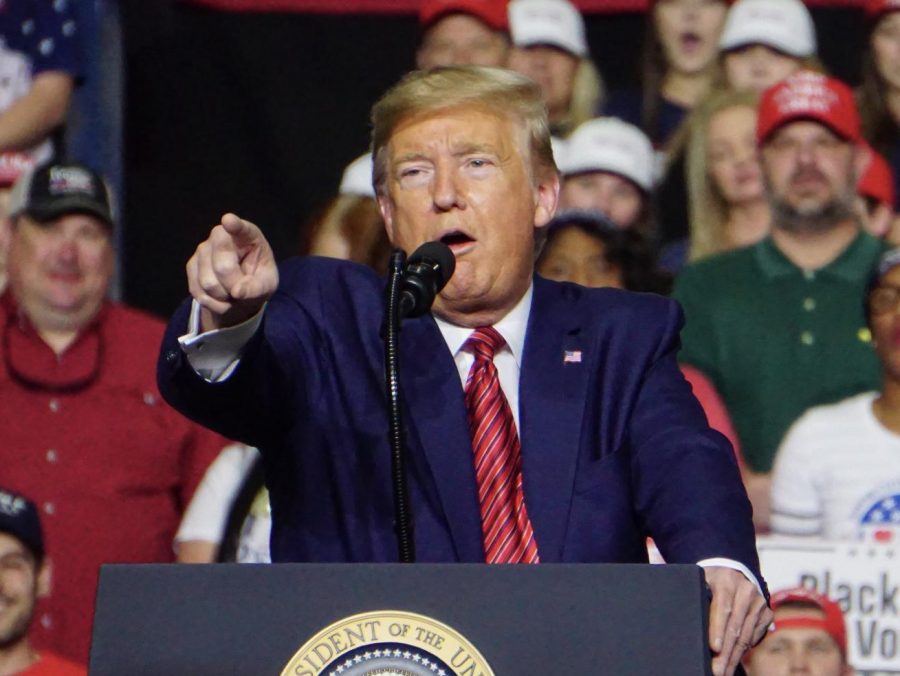 Gallery|13 Photos
Hana Donnelly
President Donald Trump points towards a camera while on stage at his Feb. 28 campaign rally. "The press is in hysteria mode [over Wuhan Coronavirus]" Trump said. "CNN, fake news -- and the camera just went off" he said pointing at a camera whose shutter had just closed.

People came from California to Kaliningrad Feb. 28 to see President Donald Trump speak at the North Charleston Coliseum. Lines stretched out the door for two days in advance to get in for his hour and a half-long rally which he came to straight after arriving at Charleston International Airport.

Lines for the rally stretched all down International Boulevard, with vendors straddling it and hawking campaign merchandise at discounted prices. Ten dollars for one of the campaign’s iconic red “MAGA” hats, for example.

Those attracted to his movement included not only die-hard Republicans of the patriotic flag-waving assortment. Many were politically neutral, brought in by Trump’s pro-worker and pro-American rhetoric. Robin Moses, a Class of ‘82 Wando graduate, and her husband Gary attended because, in her words, “We’re big supporters of Trump. We’re not Republican, we’re not Democrat, we’re not anything. We just support the right person for the job.”

Another attendee, Brian Mack, a Navy veteran from Corpus Christii, Texas, drove 18 hours to come to the rally. This will be his first time voting in 44 years of life, and he said he wants to cast that ballot for Trump because “It seems he’s more about American people, not about a certain group of people… doesn’t matter if it’s veterans, civilians, immigrants, he’s for Americans. I appreciate that.”

We’re not Republican, we’re not Democrat, we’re not anything. We just support the right person for the job.”

Rock and roll songs of the 20th century were blasted from speakers before Trump was scheduled to speak, from the Rolling Stones, Queen, Kansas and other bands that evoked nostalgia in many of Trump’s middle-aged and elderly supporters. The whole rally was organized much like a rock concert, with the coliseum packed to its max capacity and many who couldn’t make it in watching the president speak on jumbotrons outside.

Before Trump came a variety of speakers onstage, including 2013 Miss South Carolina winner Brooke Mosteller to sing the national anthem. Lt. Gov. Pamela Evette was the first to get up and set the tone for the night, declaring that South Carolina is “Trump Country” to great applause from the audience.

Following her, Gov. Henry McMaster came to the podium to laud South Carolina’s performance as one of the fastest-growing state economies in the nation, touting the 125,000 new jobs created in the last few years and the state’s record-low unemployment rate of 2.3%. He closed by thanking President Trump for making America respected worldwide again, and saying that the country is “the land of the free because it is the home of the brave.”

Trump’s presidential campaign secretaries Kayleigh McEnany and Katrina Pierson took the floor after that to issue a scathing tirade against Trump’s opponents in the Democrat party. They cited the recent Democratic debate also held in Charleston as evidence that they have “nothing to offer America.”

“[The Democratic party is] the party of hate, the party of redistribution, and the party of open borders,” one of the secretaries said. She added that Trump and his Republican party, meanwhile, have made monumental advances in the past three years. Soon, she said, the “communizing” legislation of the Democrats made under the Obama administration would be reversed.

McEnany made the bold claim then that millenials who support socialism think that “Socialism is just being social,” and then that Trump has “kept promises he didn’t even make.”

Buzzwords and phrases from the 2016 campaign were used as well to rile up the audience, with the observation made that: “I think Democrats are just triggered” and the promise that “You will see liberals crying again.”

Finally, the two proudly declared that “the party of Lincoln will always beat the party of Lenin.” The two went offstage to chants of “10 more years” from the audience, a far cry from the usual “four more years” heard in past presidential re-election campaigns.

As scheduled, at 7 p.m., President Trump arrived at the Coliseum. When he came out into the arena, Lee Greenwood’s “God Bless the USA” was played with a bass and reverb strong enough to rattle the bones of everyone present. Thousands craned their necks and held their phone cameras high to get a look at the president as he shook hands with senators Lindsey Graham and Tim Scott, then made his way up the stage to the microphone.

One of the first things he said was “all I can say is that the fake news just doesn’t get it, do they?” gesturing back towards the platform of television network cameras where our own Tribal Tribune reporters were located. In the course of his speech, he railed strongly against the “fake news.” The press section was booed a total of four times by Trump’s audience.

People shouted and jeered from across the crowd control fence at media crews. NBC in particular was called out by Trump for being “worse than CNN” and said that a more appropriate name for them would be “DNC.” He promised that since they had tried to do the same for them, he would do “everything possible to destroy their image.

The chants of “10 more years” once again came up, this time with Trump present. He appeared to entertain them by joking about “five…nine…13….18 more years!” and then jestfully asked Lindsey Graham to have the Senate put forward a bill that would extend term limits to 25 years. But he dismissed it, and said five years would be all he needed to “do a great job” and “get everything solidified.”

Trump then celebrated what he called the “Great American Comeback,” proudly declaring the return of America’s economic and industrial strength. Jobs, income and families were all prospering. This all greatly mirrored his State of the Union Address made last month in which he declared that the state of the union has never been better.

Like his press secretaries, Trump also accused the Democrats of unpatriotic sabotage, bringing up criticism of his administration’s handling of the coronavirus and accusing them of politicizing the issue despite their best efforts to protect Americans.

Their debate earlier last week was another source of ridicule from Trump. He boasted about his rally attendance numbers in excess of 25,000 which he said were “record-breaking” for the Coliseum, and then compared them to the rallies for Democrats “down the road” which only had head counts in the low hundreds.

To determine which Democratic candidate Republican voters should go out and vote for in the primary the next day to hand the election to Trump more easily, he held an informal poll with the audience. After listening to which candidate was cheered for the loudest, he decided on Bernie Sanders, giving him a semi-official endorsement.

Senators Scott and Graham were also invited up to speak, and Graham notably asked, “You know why you’re going to win? You got a damn good president.”

Tim Scott especially was celebrated by Trump for his “poverty to prosperity” story, along with his mother Frances Scott, who was present in the arena.

“Look at Tim Scott. Look at that incredible story… I give about 99% of the credit to Tim Scott’s mother,” he said

Scott himself played the part of an able hype man for Trump, asking the audience, “If you want four more years of Trump, let me hear you scream!” which they did so.

Trump finished with the same promises made in his State of the Union Address, that his administration would work to end the AIDS epidemic and land the first woman on the moon as well as the first man on Mars with the help of his newly created United States Space Force. He promised as well that his wall on the border with Mexico would be completed, and that the sanctity of life and work would be preserved.

The Republicans under him, he said, were the “Party of the American worker, American family, American dream… and big ideas for the future.”

“The best is yet to come,” he promised finally as his campaign theme, The Rolling Stones’ You Can’t Always Get What You Want played from the speakers and he raised his arms while his audience cheered. He began making his way offstage, shaking the hands of those in the crowd who pressed themselves up against the batwrrier to do so.