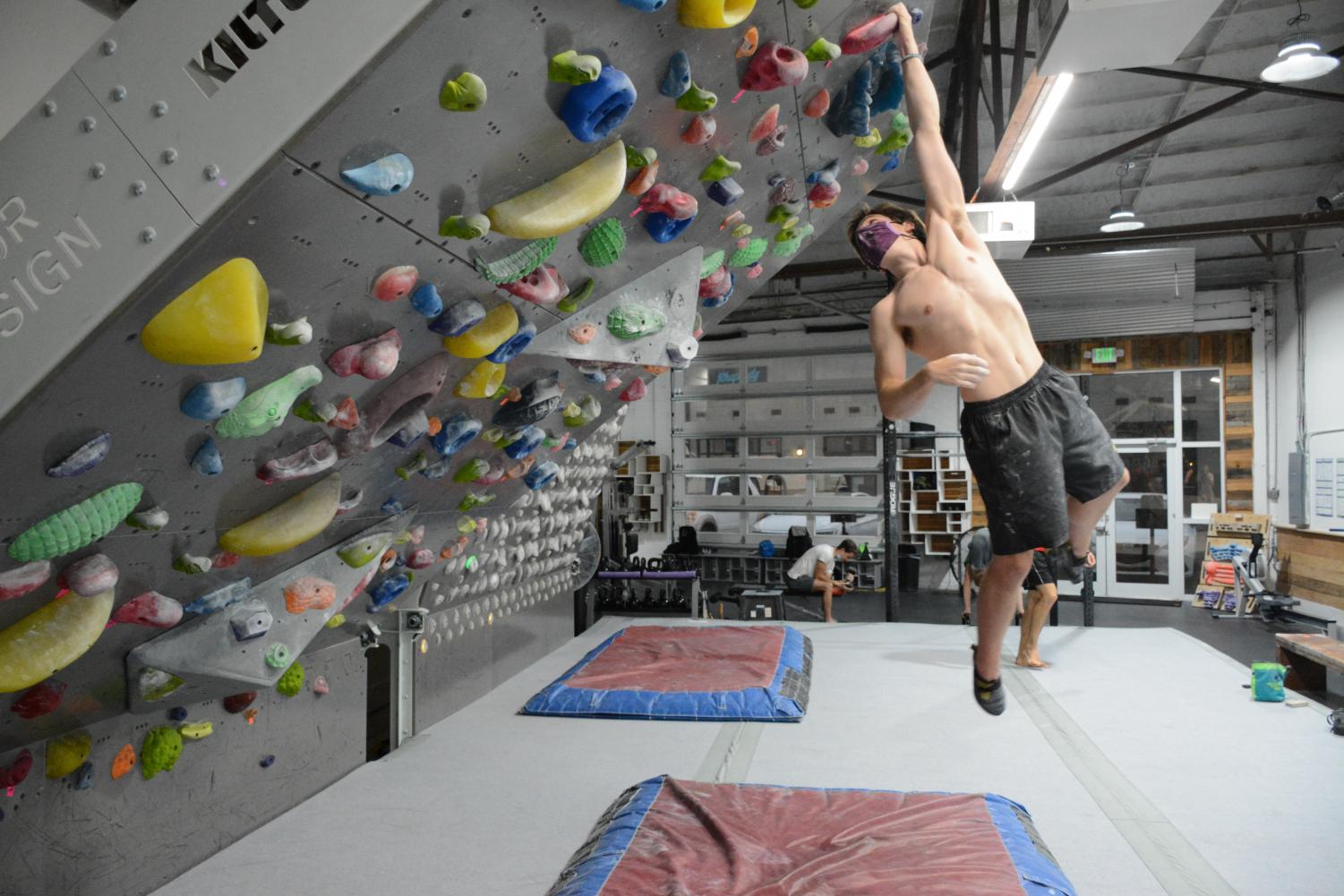 Snedeker hangs from the top of the training wall, eyeing his next moves. (Graham McAlister)

Snedeker hangs from the top of the training wall, eyeing his next moves.

Hanging on the edge

He clenches his fists.

Sweat drips down his face.

Is he anxious? Thrilled?

It doesn’t matter — either way, his body shakes. Rubbing his hands back and forth, a paste of sweat and chalk forms in his palms.

With nothing but a firm grip, he hoists his entire body across the wall. He stops moving — maybe for a sigh of relief, or even a quick break. But howls a horrific scream of pain. For seconds onward, it echoes throughout the gym.

Must be another cramp.

With the sound he made, that screech, people might think he would let go and try again. At least, most people might do that. But he pushes through the pain, shortly scaling the wall.

He finished that route, but his training is far from over.

Since his sophomore year, senior Sam Snedeker has devoted his time to one passion — rock climbing.

“Climbing is an unconventional sport,” Snedeker said. “Basically, you’re trying to figure out the correct sequence up a wall using only your hands and feet to maneuver your weight.”

In a sport as physically demanding as rock climbing, rigorous training is a requirement. So, when Snedeker first began, it wasn’t easy.

“Physically, I would get tired doing any form of physical activity. The mile run in PE always just took every little bit of energy out of me,” Snedeker said.

Back then, Snedeker had not participated in any sports. He was overweight, he couldn’t perform a single pull-up, and running a mere mile was a challenge — he needed to change. Then, he discovered Coastal Climbing.

“I found the gym here in charleston on king street,” Snedeker said. “I just went there one day and fell in love with the community they have there.

Snedeker finally found his motivation to change. All that was left was the work he needed to put in. Starting out, he could only climb the easiest routes and the largest grates. As he progressed, though, the walls only grew in difficulty. In order to improve, he had to train outside of his gym – he needed to build muscle and stamina.

Snedeker stuck to this commitment. Now, he trains up to five times a week at Coastal Climbing Gym. Here, his routine begins with three to four hours of wall climbing. Following up, Snedeker finishes off his regime through weight, finger strength, or cardio training.

But that’s not all. Cutting out processed foods in his diet, Snedeker found a replacement for the constant cereals and mom-packed lunches he usually had. Now, Snedeker’s diet consists of fruits, vegetables, lean protein, wraps, protein shakes and salads.

“I’ve just noticed that my mood, ever since I really got into climbing, has been better, just from being healthy,” Snedeker said.

And all of this hard work has paid off. For his first ever competition in Vail, Colorado, Snedeker placed first in his division for the Vail Valley Foundation’s Citizen Climbing Competition.

Since then, Snedeker has continually competed in competitions held by Coastal Climbing Gym.

“If I continue to train at the rate I do, I could potentially compete at national competitions,” Snedeker said. “I think I have a good chance in the next few years in order to grow and be able to compete for that.”

In his progression, Snedeker has had some help along the way. With support from his gym’s community, Snedeker has been able to push himself.

“Most people who climb are very supportive of each other, who can help people out if they are stuck on a certain move. Someone can offer you the right way to do it. No one’s ever really mean to other climbers, every climber has been at the same level at one point,” Snedeker said.

Snedeker’s talent had not gone noticed just by his gym’s members. In fact, his gym’s owner, Kensie Whitfield, witnessed firsthand the work that Snedeker has put into his gym.

“He came in not knowing much about rock climbing, if anything at all. And now, he’s an extremely strong athlete,” said Whitfield.

Having traveled across the world for climbing – hiking the Appalachian mountains, sleeping on the side of slopes, and undertaking mountaineering in the Chugach mountain range in Alaska, Whitfield has significant experience under his belt, and is able to spot and train talent.

“I think anyone that has that much passion can go really far in the sport,” said Whitfield.