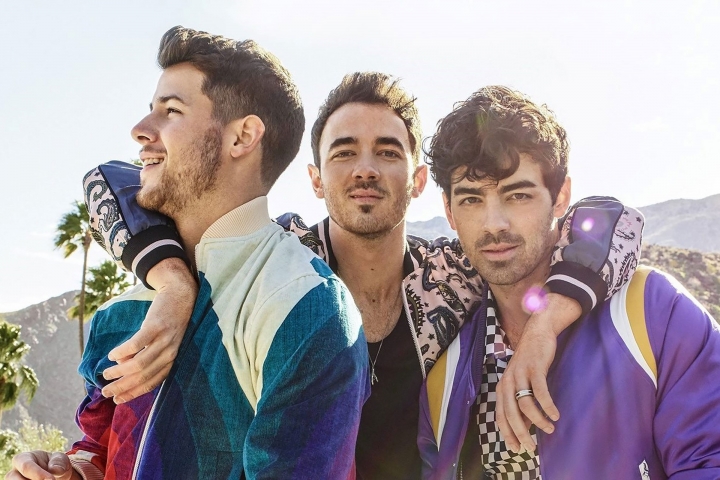 It was an eruption of screaming and crying. Screams from girls who are now 26 but feel like they are 16 again just for the night.

There are families… Dads who still remember every song from 10 years ago when it played on the radio and MP3 players. Old t-shirts (a little smaller now) pulled out from a box under beds.

It’s a concert on Nov. 19 in Charlotte’s Spectrum Center that spans from grandparents to parents, to moms and dads who were the kids, that now have their own kids here. Before the concert starts, the Jonas Brothers set the mood of the crowd with songs from the early 2000s from various artists; the DJ is spinning records, and every fan in the arena is singing, dancing and definitely in the mood for what was to come next.

The arena goes dark, no one on the stage but the spotlight shines up while a platform slowly floats down from the ceiling with three brothers. The classic 2008 punk guitar, fast drums, flashing lights and tight jeans.

The Jonas Brothers are back and better than ever, with chart-topping new songs along with their iconic classics. A rush of flashbacks and memories. Everyone in that arena shared a special connection. They opened with a new song off their most recent album “Rollercoaster” with a line “it was fun when we were young but now we’re older…but I’d go back and ride that roller coaster with you.” It was magical. Honestly speaking I was flooded with tears, I felt like I was 5 again dancing in my room blaring their music with posters of Joe, Kevin and Nick.

The Jonas Brothers’ set list consisted of some of their new songs including “Cool,” “Sucker” and “Comeback.” Many songs were performed on the main stage with Joe energetically running from one end to the other, entertaining the crowd with his crazy exuberance and stamina…such a performer.

Nick, who used to be the cute baby of the brothers, is now a suave man, playing his many instruments and hitting insane falsetto notes. Kevin, as usual, was doing his crazy jumps and spins with his guitar, holding every song together.They would then run down the main stage across a long, narrow stage, over to  a platform on the opposite side of the arena. This platform floated ridiculously high above the crowd. They were so close, I felt that I could almost reach out and touch them.

Glowing lanterns, floating drone balls and 20 foot tall inflatable dancing air men  entertained the crowd while the Jonas Brothers lit up the arena with their incredible music. This is a typical, perfect Jonas Brothers concert, once again outdoing themselves. As they gracefully floated back down to the platform below, they started playing “This Is Me” from Camp Rock. To be able to see that live as a young girl, and then again 10 years later was the moment that the most tears were shed and the screams were crazy.

Before some of their songs, the Jonas Brothers played videos from when they were younger and the crowd went wild. While they played “Burnin’ Up,” the entire back stage lit up in flames. The flames were so hot that we felt the temperature go up like 20 degrees. The same lit up marquee that they used for their 2007 hit “S.O.S” was displayed during their performance. They also played “Love Bug,” “Year 3000” and every other hit that had the entire crowd singing and dancing in their seats. Kevin played on a piano that floated high up in the air across the crowd as they sang “When You Look Me In The Eyes.”

Still capturing hearts with their looks, songs, voices and personalities, the Jonas Brothers’ comeback has changed music and lives forever. Their new album is titled Happiness Begins. This title references a heart-wrenching era of their break-up more than 10 years ago, which not only broke up the band and an era of music for all, but it also broke them up as family.

They decided that with all the unkindness and adversities that are happening in the world today, their “Happiness” had to begin as a family and spread to others through their music.

The brothers originally had no plans of getting back together, but after filming a documentary about their life, they regained a relationship that was stronger than ever. They sat around and played some of their old songs and it was then that Joe asked, “are we doing this again?”

As they no longer have any more ties with Disney, they can now do whatever they want for their music and make their own choices on performances.

They have since repeated many times, “there’s no more breaking up; we are brothers and we can’t break up.” They needed the past 10 years for personal growth, to find out who they were as individuals and they needed time to mature. They then realized where they belong…together! They are “The Jonas Brothers.”

They are not going away anytime soon…they have over five albums already written and waiting to be released.

The Jonas Brothers concert was a fantastic way to get away from the outside world and have an amazing time. It brought back great memories from good ole’ times and created many new ones.