Student puts her passion to work by creating charity 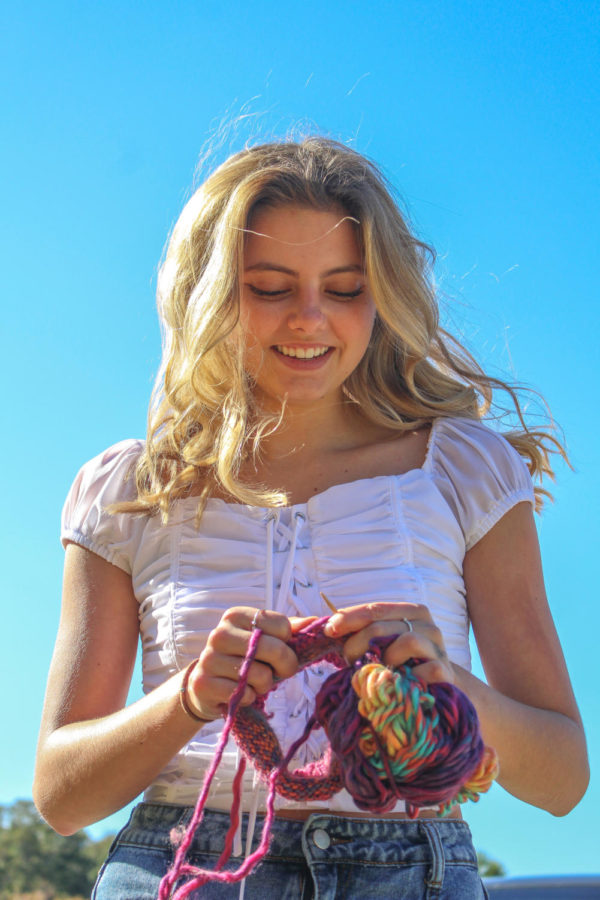 Junior Kylie Crookes smiles while working on her latest hand crocheted hat that she will eventually donate.

A five to eight hour process, immense amounts of patience, and lots and lots of yarn is just the beginning of a life-changing hobby. With a smile across her face, Junior Kylie Crookes gives her handmade hats to the hospital worker.

“I have been crocheting for over a year now and knitting since… sixth grade,” Crookes said.

A COVID-19 hobby turned into an on-going production for Crookes. Instead of doing it just to pass time she was able to find a good way to grant other people these special gifts.

Despite all the hard work, the pandemic put restrictions on her production.

“Unfortunately because of COVID-19 I’ve never gotten to hand them out,” Crookes said.

So instead of being able to see all the sweet faces of the patients she was gifting her hats to, she handed them over to another hospital worker.

“When I give them to the lady she’s just always so grateful and it’s always so cute … cause she’s just a little old lady,” Crookes said.

Crookes wanted to specifically donate her hats to NICU babies and toddlers going through chemo.

“I always loved to work with children, I just think it’s so sweet,” Crookes said.

Her parents also work at the MUSC Children’s Hospital so she was able to get connections through them.

“I’ve always heard them talk about getting chemo caps and stuff so I was like, maybe I should do that,” Crookes said.

In efforts to individualize her work from others she would spend lots of time picking out patterns and different styles of hats for the kids.

“Whenever I want to find a new design [I] just look it up, but most of the time it’ll be something …  like an animal,” Crookes said. “ I’ve done ones with little bows and flowers on them.”

Instead of just an ordinary pattern, she adds details people will appreciate.

“I just look at a pattern and kinda see which one I like and it depends on which one I think would fit the people at the hospital more,” Crookes said.

Crookes focuses especially on the kids that have long hospital stays. Even though the babies and toddlers don’t really understand what the hats are for, and the meaning behind them, the parents express their appreciation towards Crookes. An important part of her process is specializing the hats.

“I like to put my label inside there so that they know I made it,” Crookes said.

This year, Crookes took the extra step and started a Crochet club at Wando, along with some of her friends. She wanted to grow what she has done and hopes to get people in her club involved in it.
“There’s a ton of people that joined [crochet club] and I was like ‘man, I didn’t know that many people wanted to crochet’,” Crookes said.

Corinne Mills, the teacher sponsor, has been a big help with Crookes. She hopes to take the crochet club and have the members help make more hats to continue donating.

“We have to learn how to do more than just one line but we’ve talked about the community service project so ultimately that’s going to be our goal,” Mills said.

Because of the long process of making the hats, the crochet club offers service hours for its members.

“You get seven hours per hat which is great, so out of the amount I’ve donated I have around 840 hours right now,” Crookes said.

In addition to her parents, Crookes’ biggest inspiration is her grandmother.

“With your grandparents you only have a limited time so it kind of helps me talk to her about this stuff and she just loves what I’m doing,” Crookes said.

Crookes’ Grandmother, Jodi Luke, was a big help to Crookes throughout her process.

“She started knitting these baby caps and all kinds of different designs and patterns and she’s been doing it now for a number of years but she’s almost never without something in her hands,” Luke said.

Since she was young, Crookes has been very passionate about crocheting and knitting.

“You know some kids listen to music, but she likes to crochet and knit,” Luke said.

Crookes spends a lot of her time doing crochet. No matter what she’s doing she will always find a way to incorporate crocheting and knitting.

“She was a teacher’s assistant one year and she would just sit there and she’d crochet,” Mills said.

Not only is Crookes changing perspectives for the hospital families, but also the people around her.

“ I was surprised at her age that she would come up with such a time consuming project because I remember what it was like to be that age and if she’d knit a couple of hats it would be one thing but we’re talking about a pile of hats,” Luke said.

“It’s indescribable that she would choose to, on her own, spend that amount of hours, to give something away in hopes that somebody can use it is wonderful. I don’t think there’s any greater satisfaction.”