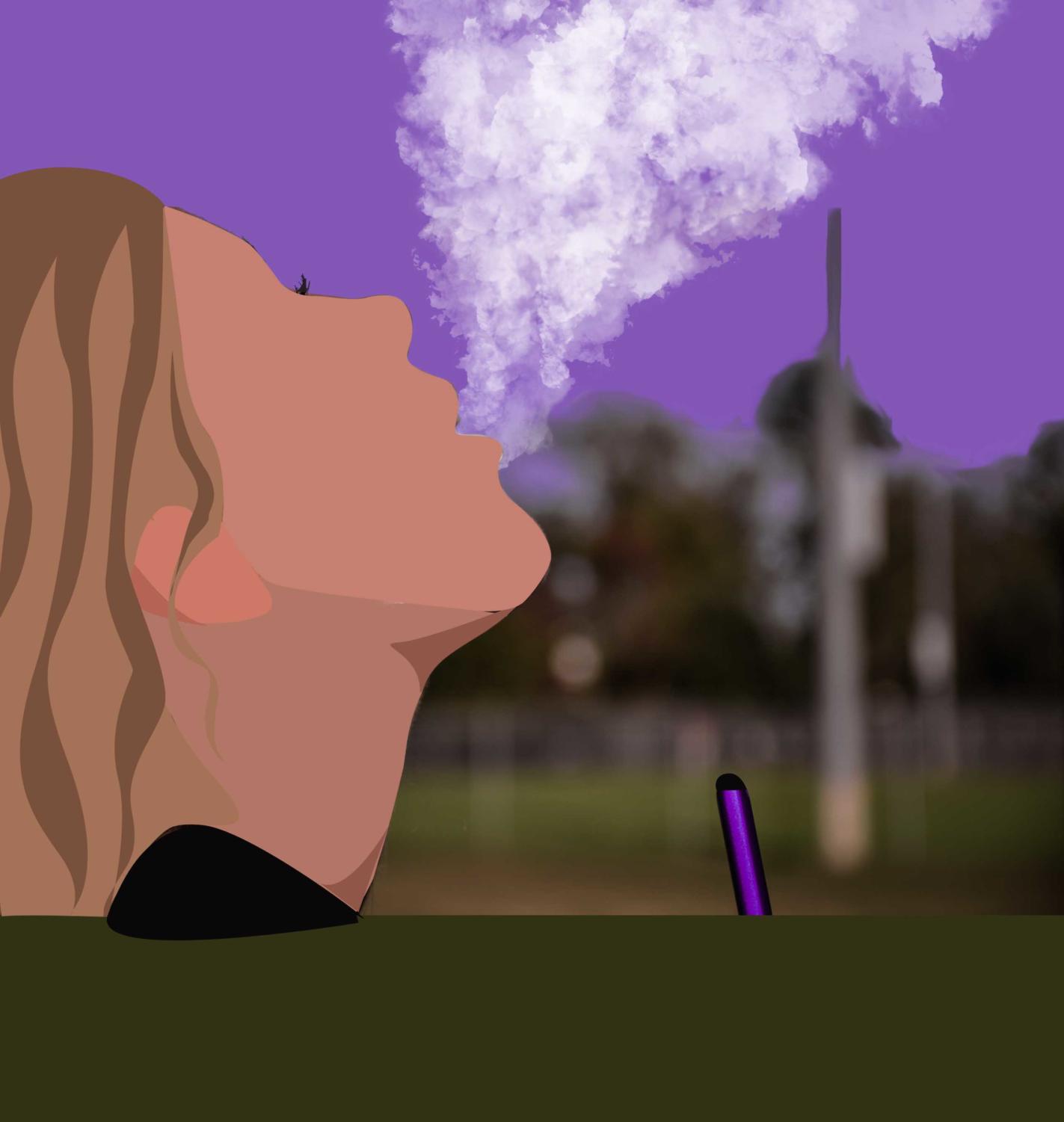 Editors’ note: Some names have been changed to protect identities

As a child, Emily was constantly told not to do drugs and not to smoke. She grew up informed about the dangers of nicotine and other drugs. She was told not to be peer pressured and to not be influenced by “the cool kids”.

But it wasn’t enough.Emily fell into the habit of vaping her freshman year.

“I think it was a JUUL pod or something. My friend was like, ‘oh, you should try this’. It made me feel sick, but I remember getting that head rush. And I was like, ‘oh, this feels so weird’. Then I kept coming back and doing it to try to get that again. But it was never like that first rush that I felt,” Emily said.

Despite having had numerous conversations and warnings from her parents, to Emily she viewed the normalization of vaping from her friends as much more convincing.

“My friends would encourage it, and I was like, ‘Oh, if other people are doing it, then I feel like I can’t actually be that bad’. Because, if everyone’s doing it, why would it hurt me?” Emily said.

After vaping throughout high school, Emily has noticed her constant shortness of breath. She struggles to go on runs, or even with daily activities like going up stairs, and she attributes this to vaping.

Although Emily continues to vape, she acknowledges the negative mental and physical effects it has had on her. Her addiction makes it difficult for her to quit, as she has tried to do so multiple times.

“I feel like it stresses me out, especially the anxiety about the health problems. I’m starting to see the effects and I’m getting stressed because I don’t want it to ruin my life, but it’s so hard to stop,” Emily said. “Then I get anxious and I don’t hit it for a little bit, until I need to do it again. Then I get more anxious about what it’s doing to my body and stuff, it’s just an ongoing cycle.”

For senior Jessica, she started vaping in 8th grade in the school bathroom when all her friends were doing it.

“When you first start doing it, you don’t think, ‘oh, this is going to be addicting for me’. But instead, your brain is like, ‘oh, I’m gonna be the person that doesn’t get addicted, it’s not that big of a deal’,” Jessica said. “But, over time, it gets hard. You start realizing you’re more reliant on the substance in the sense of that when people ask you to stop doing it, then you’re like, ‘I can if I want to, but I don’t want to’ and that’s a sign of, ‘oh, like, you’re kind of addicted’.”

However, unlike with Emily, it was easier for Jessica to quit, and she no longer vapes.

“I started hanging out with people that didn’t do that kind of stuff, and were just better role models for me,” Jessica said. “I just started realizing that it’s kind of a stupid thing to, ruining  your health for when it’s not necessary, and yeah, it was nice here and there, but I feel like it’s much better to not do it and be healthier in the long run.”

Jessica believes that everything happens for a reason, and she was glad to have gone through it as a learning experience, but also glad she quit in the long run.

However, she said that in the moment, she noticed vaping had a positive impact on her mental health, as it was an outlet for her.

“For me, personally, I think vaping had a positive effect on me in the sense that it was relaxing, and calming for my mental state. So, when I was really frustrated or upset, I would go to the bathroom and hit my vape. I think that it shouldn’t, but it would kind of make me feel better. So I want to say, even though I know it shouldn’t, it kind of had a positive effect on my mental state,” Jessica said.

But experts paint a darker picture. According to the National Institute of Health, teenagers are more susceptible to addiction, and despite the momentary highs and feelings of happiness, there are major cognitive deficits associated with vaping. Because teenage brains are still developing until the age of 25, nicotine exposure has been linked with impairments in memory and functions. On top of this, E-cigarettes are connected with increased impulsivity, hyperactivity, behavior changes, aggressiveness, depression, and are found to be a gateway to alcohol and marijuana use.

“I feel like in the long run, it just kind of makes you addicted to the feelings you have because of the substance. So when you’re angry, and you’re frustrated, and sad, and you don’t have your vape then, you’re kind of freaking out about it. And you just kind of over exaggerate the situation, because you don’t have that substance to deal with it anymore,” Jessica said.

Jessica claims that it depends on the person, and their personality, on how they react to trying different substances, like nicotine, and if and how they deal with addiction. For her, she says that since she doesn’t have an addictive personality, it was easier for her to quit. However, for others they may end up being more dependent on that substance and it is safer to avoid doing it in general because it is unpredictable how your body will react to a stimulant, like nicotine.

“We’re teenagers and we do things just because and without thinking, but I would say think more on your actions and think more about what you’re doing, because in the long run you’re gonna be affected by the side effects of vaping. You might not see it now, but you will later and so I would just not do it now, so then you can be better later,” Jessica said.

Assistant principal MacCreaFinch, said that each administrator deals with approximately 10-20 vaping cases a year, and it’s an epidemic across all high schools.

“I would say that it probably would have to do something more with that it would help students who have addiction problems in that it just adds one more thing that they can get addicted to easily, because it’s so easy to buy, so easy to use, and it’s hard to detect,” Finch said.

Finch sees students who get caught who are either first timers who just so happened to get caught, or some who have been in the office multiple times for different infractions.

“They’re trying to fit in with the crowd. They see everybody else doing it, so they’re doing it as well,” Finch said.

According to Finch, the school has district protocols for vaping. They have something called the PDP that breaks consequences down for different substances, and plans out the steps for the student to take. They take steps not only for disciplinary action, but also to help educate them and recover from the possible addiction they gained from the substance they were caught using.

“If it’s something where it gets more intense, then we’ll make some suggestions to parents, but at the end of the day, it’s kind of up to the parent, and the child to make those decisions,” Finch said.

Ennis James, a pulmonary and critical care physician at MUSC, said that the long term effects of vaping are still unclear. According to James, there have been around 60 deaths in adolescents since 2019 from vaping. There have also been many other cases where patients who, when vaping, get an immunologic reaction or an inflammatory reaction in the lungs, which is what is known as Vaping-Induced Acute Lung Injury.

“We honestly don’t know yet. There’s definitely some toxins that you inhale, obviously it’s not as many toxins as are inhaled with regular cigarettes, but there’s things like heavy metals from the battery and the actual liquid that they use to put the nicotine in, that’s also kind of an unknown,” James said.

According to James, the amount of nicotine you get from E-cigarettes is higher than that of regular cigarettes. And while nicotine exposure is not carcinogenic and is not found to cause cancer, it still affects brain development, and is associated with higher risks of depression and other mood disorders. On top of this, studies have shown that vaping in adolescents leads to being a smoker of traditional cigarettes down the road, which can lead to cancer, and numerous heart and lung diseases.

“Addiction in general, increases stress and anxiety levels. It can certainly change the way the brain develops, and it may affect a lot more things long term. The problem is, when you get that much nicotine when you’re vaping, the reward is so much stronger than with traditional cigarettes. And while that reward feels good at the time, once you’re addicted to it, the stress and all the other effects eventually come crashing down,” James said.

E-cigarettes were originally created as a way to help cigarette smokers stop smoking, and vape instead. This is why companies, like JUUL, created E-cigarettes that have more nicotine, and more flavors, which inadvertently targeted young adults and teenagers.

“One of the biggest things I think is that it doesn’t smell, so you can get away with it easier, in terms of teen use. And it’s more socially acceptable than smoking traditional cigarettes. There’s also a lot more flavor options with E-cigarettes than there are with traditional cigarettes. You don’t get the irritation, or that burn that you usually get with regular cigarettes, so it’s easier to use it and sort of fool yourself to not think it’s something that can harm you,” James said.

According to James, the best way to start going about quitting is to talk to your pediatrician, or primary care doctor. Ultimately, they will lead you to solutions like nicotine replacement therapy, support groups, and possibly going on medications to help.

“Nicotine is a very addictive chemical, and quitting is one of the hardest things that adults do in their lifetime. So it’s not going to be easy, but with support and resources, you can definitely do it,” James said. “You just need everybody’s help, and it’s not going to be easy to stop, but you aren’t alone. There’s people out there who can help.”